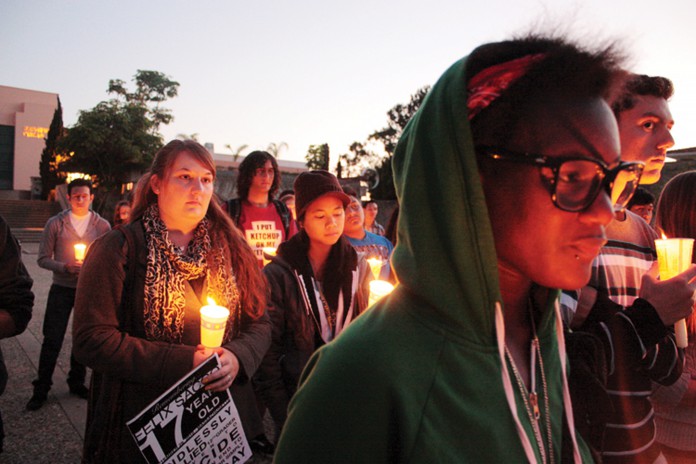 Solidarity. Peace. Alliance in light of the recent  suicides across the nation due to homophobic bullying and harassment, a series of candlelight vigils leading up to National Coming Out Day worked hand in hand to further fuel the fight for equality and alliance in the queer communities. During the month of September, nine teens committed suicides over concerns about their sexual orientation, according to the UCSB Queer Student Union.

Last Thursday night, the very heart and epicenter of the UCSB campus glowed as local community members lit candles in solidarity. They came to honor their lost friends and family and for those still fighting for peace and warranted acceptance at the base of Storke Plaza. This recent candlelight vigil, held on October 7, 2010, consisted of opening speeches given by several members of the local community and was followed by a silent march through our Isla Vista community.

Nationally, queers and allies stood together in similar demonstrations to pay respect and tribute to the recent tragic teen suicides across the nation occurring this past month in states such as Texas, Minnesota, New Jersey, New York, Indiana and here in California.

A quiet moment will be reserved at the candlelight vigil for the several who lost their lives to the shadows of external harassment, humiliation, and abuse. “In this darkness, there will be a time for all to be out in solidarity and alliance,” says Abrahan Monzon, Co-Chair of the UCSB Queer Student Union

National Coming Out Day is an internationally celebrated event pioneered by Dr. Robert Eichberg and Jean O’Leary in 1988 for their respective groups, The Experience and National Gay Rights Advocates. This day of celebration has reached a new level of international awareness, occurring in unison with other nations such as the United Kingdom, Germany, Poland, Switzerland, Canada, Croatia and the Netherlands as of the year 2008. Within the United States, the Human Rights Campaign manages the event.

“It shouldn’t take this many people in our community to commit death upon themselves for us to see this injustice surface. It shouldn’t have taken this long for us as a responsible nation to see past our external differences. Either way, it’s more important that it is now visible more so than never”, states Desiree Stevens, a UCSB sophomore.

“Now the point has driven its stake into our society. It’s our chance to respond as a collective force of love and acceptance”, responds Danielle Stevens, also a UCSB second year student. “

National Coming Out Day of 2010 was held in the hope of birthing a new era and decade of revolution, love, acceptance, inspiration and unity upon a new strata of humanity.