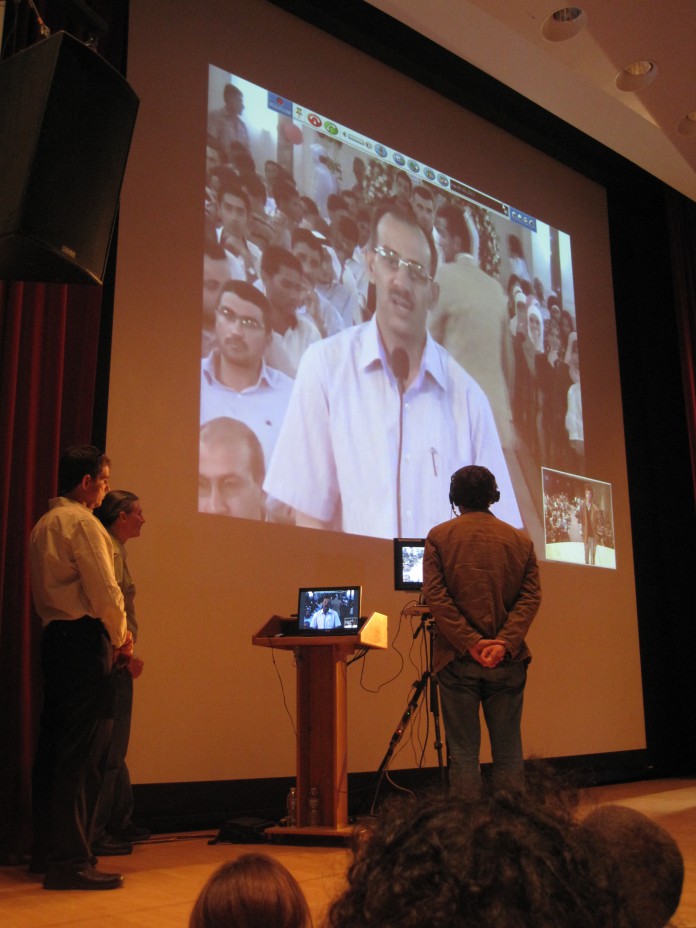 UCSB and Global Access Media organization hosted the first unscripted student videoconference between American and Iraqi university students on May 9. Titled “A Dialogue for Peace,” the live video-chat was an effort to establish an open public discourse that would connect and build relationships amongst the next generation of leaders in both countries.

Hosted by Mark Manning, a documentary filmmaker, and Professor Dwight Reynolds of the UCSB Department of Religious Studies, the event began in the Multi-Cultural Center with a one hour documentary called “The Road to Fallujah” that depicted the Iraq War from the perspective of everyday civilians. Manning, along with UCSB alumnus Natalie Kalustian, directed and produced the documentary in order to provide video coverage of the war in Iraq that did not rely on embedded US journalists or the opinionated news media.

“Reporting on the Iraq war was predominantly about the US military,” said Manning. “There was no reporting about the effects of the war on Iraqi civilians.”

This realization prompted Manning to create “The Road to Fallujah,” a documentary film that focused on the human aspect of the Iraq War, the human story and consequences of military actions that are usually removed from the sound bytes produced in the US media.

“Sound bytes just define a problem,” added Manning. “The human aspect of the story is a key ingredient to understand where the solutions might lie.”

Before the film, students were asked to fill out a survey about their views and perspectives on Iraqi culture and people. Throughout the documentary, UCSB students and audience members were exposed to the stories and lives of ordinary people in extraordinary circumstances.

While Manning lived amongst an Iraqi refugee family on the outskirts of Fallujah in 2005, filming the documentary, viewers were able to share in the extreme risks Iraqi civilians experienced at military checkpoints. Viewers also observed the sheer desperation felt by families who lacked the civilian aid necessary to feed their children or protect them from illness.

“The documentary was a little shocking, but it was great,” said Karina Zaur, a fourth-year political science major and international exchange student from Kazakhstan.

After the documentary, there was a short intermission where the audience could stretch their legs, get free coffee and free snacks before the start of the videoconference. At 11 PM, when all the cameras, computers, microphones and headsets were placed in their proper positions, UCSB students were given a window into the lives and concerns of Iraqi students half a world away via video-chat.

After Manning and his Iraqi counter-part made their formal salutations, US students started the dialogue with a question about how they predict the lives of Iraqis will change with the withdrawal of US troops next year. Following questions and comments were concerned with the distortion of Iraqi culture in American media, the difficulty of transportation for Iraqi civilians, and the possibility of peace in the aftermath of the war.

“Main thing I took away was that they knew how misrepresented they were by the media and were impressed to see that we knew that as well,” said Daniel Sides, a third-year political science major.

Numerous UCSB students asked questions in Arabic, impressing many Iraqi students and professors. Although there was quite a language barrier, and dialogue was slow through translation, the excitement and heightened interest of the participants was palpable.

“The videoconference worked beyond our expectations,” Manning proudly stated. “The energy created on both sides was stunning to me, and it showed a deep hunger and desire for a people to people connection that hasn’t really existed.”

While Iraqi students and professors were asking questions, the Iraqi camera would zoom in on different part of the crowd and pan across the room, allowing the US audience a full view of their counterparts. This also allowed for a more personal and humanistic view of the Iraqi audience projected on the video screen, prompting a more relaxed and informal dialogue.

“Any time you try to reach different people, it is better to talk to them directly rather than rely on the news,” explained Zaur.

The videoconference with students in Baghdad lasted until 1 AM, and both audiences were clearly upset that it had to end. However, as Americans and Iraqis clapped their hands and waved good-bye half a world away, there was a sense of hope and optimism in the MCC that needed no translation.