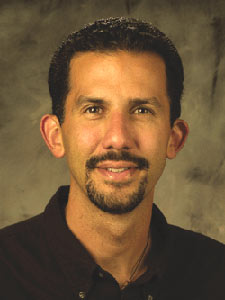 Passionate, influential, and genuine are all words that come to mind when thinking of my Chicano 1C Professor, Ralph Armbruster-Sandoval. In a lecture hall pushing three hundred people, the personal connection he creates his students is an amazing feat. Armbruster-Sandoval’s passion for Chicano studies and activism regarding the subject is readily apparent and our interview proved this enthusiasm goes far deeper than surface level. Armbruster-Sandoval’s class focus goes beyond working for a grade; he seeks to understand what is wrong in the world and educate on how we – as students, a community, and human beings – can use our opportunity to help the oppressed. Influenced by his family, students, previous professors, and civil rights leaders alike, Armbruster-Sandoval’s main desire is to make an impact on the world, however significant or insignificant it may be.

After receiving his Political Science undergraduate degree at California State University of Long Beach, Armbruster-Sandoval had ambitions of becoming an attorney working on the side of “people in the trenches, people in need, or people of color.” He wanted to help with rights for unions or an organization that deals with issues of homelessness or poverty, illustrating his strong belief in the importance of working toward equality for all. When LSAT scores stood in the way of this dream, a respected professor guided him to a new and equally rewarding path. This teacher posed a question for the younger Armbruster-Sandoval, “Can you see yourself doing what I do?” Armbruster-Sandoval reflected on this idea, but left the question unanswered as he had difficulty comparing himself to a man he held with such high-regard and admiration. The next step was then attending graduate school and finishing classes in 1990 at the University of California, Riverside. Come 1998, Armbruster-Sandoval found his calling as a professor here at UCSB.

Teaching both lower-division and upper-division courses, Armbruster-Sandoval created a learning environment centered on the notion of mutual respect, something he appreciates from his own experiences before becoming a professor himself. “I had a couple of really great teachers that took me under their wing and treated me as more than a number, some who, even now, I call upon regularly to tell them what is going on in my life,” said Armbruster-Sandoval. “These people taught me what it means to be a teacher: it means more than showing up; we need people to give a shit and try to change the world. Why else are we here?” For this professor, the reward comes from making a difference in his students’ lives and vice versa. “[As a teacher] you want to do something,” said Armbruster-Sandoval. “If you can light up at least one person, that’s significant.” This determined attitude exudes in both his relationship with his students, as well as in his efforts to teach the course material and inspire action.

Armbruster-Sandoval recalls one story in particular that provided him with gratification from building relationships with his students and showing how, in turn, they each had a significant influence on one another. In 2001, Armbruster-Sandoval was fervently working to publish a book while striving equally hard to stimulate his students to demonstrate on behalf of the anti-sweat shop movement. One afternoon, he received a call saying his book was “basically shit,” but he could not let this discouraging message prevent him from his plans of spreading awareness on the movement with students. Ester, one of his students, could immediately sense his distress. She was able to encourage him to believe in himself in a moment when he felt he had lost his self-esteem. Bringing the story full circle, Armbruster-Sandoval was asked just last week to introduce Ester at an awards ceremony where she was receiving recognition for her work at Pueblo, a Santa Barbara based organization that empowers working class people and Latino immigrants. Significantly, Ester was energized to a degree by what took place as a student in 2001, so her contributions to the organization began as a result of the class. “It a blessing to know that I have helped a lot of students open up their eyes about something, and that they’ve done the same for me.”

As much as we, as students, view Armbruster-Sandoval as a dedicated professor and activist, he is above all a dedicated husband and father to his two children, Sol Justica, age 5, and Sky, age 3. He laughs as describes the “unattained benefits of being seated in alphabetical order,” referring to high school sweetheart and now wife. Following each other to college, moving to grad school only 15 minutes apart, and 18 years of marriage later illustrates how his own real-life love story has been a driving influence for Armbruster-Sandoval. Having two children completely reshaped his life in the sense that he became “much more active in a different way. Before [he] had them [he] was going to many more rallies, etc., but they pull me back home: where I need to be and want to be.” In this aspect, Armbruster-Sandoval feels a constant tension between “wanting to be a good parent and wanting to be a good person.” Armbruster-Sandoval draws inspiration from past civil rights leaders such as Martin Luther King, and Langston Hughes to teach his classes about societal issues such inequality and justice, yet his family provides him with strength and morality as his main priority and driving zeal for life. As a result, the ideas of these prominent figures in his life are often intermixed. For example, when asked on his opinion regarding the biggest issues in the world today, Armbruster-Sandoval creates a strong connection between how the current war’s devastating effects on our country is directly influencing his own community, own family. He addresses a valid point regarding the “out of wack” priorities of the United States government who will find money for “bombs, banks, prisons, and everything else we don’t need…but not for our community, pools, parks.” He teaches his course through the same lens: how can we look at larger issues affecting people today and relate them back to our own situations? Clearly, he tries to balance his own priorities as he feels necessary. “Life is pretty full at the moment,” said Armbruster-Sandoval. “When I get done talking to you and another student I’m going to take my kids to the park.”

Armbruster-Sandoval left me with one final note, which I believe highlights his inspiring attitude. “It’s a great thing being a teacher…to see response from my students. I teach in a very unique way; I’m just trying to get people to care and be to be myself. And if they don’t like it…well, I don’t know what to say.”