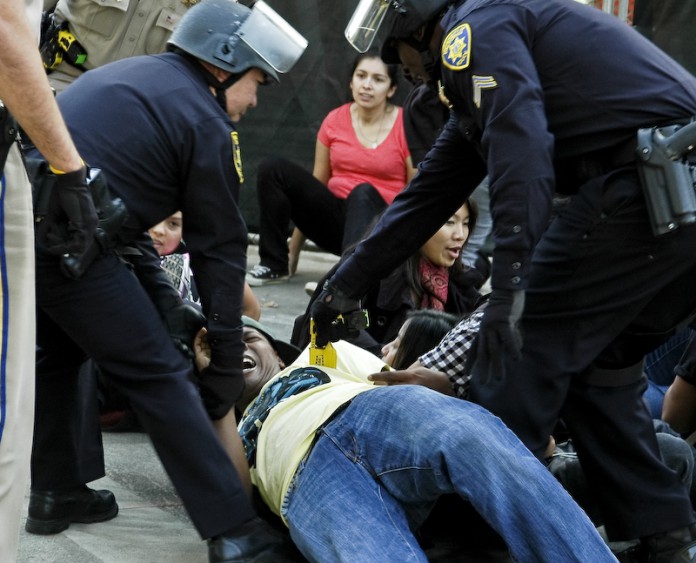 “This is an unlawful assembly, you have five minutes to disperse,” said one of the many police officers who formed a wall between the outraged public and the UC Board of Regents.

Tensions were high as the Regents tried to conduct business over the shouts of “Let them speak!” by outraged protesters excluded from a meeting which directly affects them. Even after law enforcement officers removed the public section from the meeting, chanting could still be heard from the masses waiting outside the building. The Regents continued as if nothing was happening, even chuckling at jokes every so often.

Organized chaos occurred outside the building as students with picket signs chanted, “Whose university? Our university!” Bongos, drums and even cardboard boxes beat in the background, as protesters linked arms to form a chain surrounding the building, waiting for any of the meeting’s participants to exit so they could deliver their message: do not raise fees.

“We will not allow these events to go in silence,” said Don Andres, a member of the UCLA Undergraduate Students Association Council. “We will make sure our voices are heard through the state.”

Although students and workers from several UC campuses gathered to oppose the fee hikes, their voices were of no avail in the decision making process. The Board of Regents approved the decision to increase student fees by 32 percent through a vote at the UC Regents Meeting, which took place November 17, 18, and 19 at the UCLA campus.

“We’ve seen our support from the state go down by 50 percent over the last 20 years and by 20 percent in one year,” said UC President Mark Yudof. Since the state decreased funds for education, the UC schools have been searching for outside funding and making cuts to the budget to decrease the deficit. Many students worry that the 32 percent fee increase will cause more dropouts and an increase in student debt, because some would be forced to take loans. However, the Regents are not without a plan.

The Board announced that the Blue and Gold Program makes the UC system more accessible for low-income students. Anyone from a family making less than $70,000 per year will not have to pay any fees, and students from families that make between $70,000 and $120,000 will pay half. The students who come from higher income families are actually the ones who are losing out, Yudof said.

One third of all the undergraduate fee increases will be set aside for Blue and Gold Program scholarships, and will only be used if Cal Grants and Pell Grants do not cover the full cost. The Board is also devising plans for raising a goal amount of one billion dollars from outside sources to go towards scholarships.

Many of the student protesters seemed unaware that such a program existed, as many tearful students testified that they would have to leave school because they can no longer afford it. The Board approved the idea to begin promoting the Blue and Gold Program through media and advertisements in an attempt to save the UC image and keep enrollment rates up.

Employment was also a topic of concern, as 2,000 employees of the university system will be laid off as a result of the budget cuts. Keisha Brown, an employee of the UC owned Martin Luther King Jr. Hospital, emotionally communicated her story to the UC Regents, telling them that her wages are too low and she cannot afford to pay her rent. She led the public section of the meeting into a frenzy of chanting, until they were removed by the police.

The UC Regents are currently working to find more sources of outside funding to sustain the quality of the UC system; however, they cannot afford to keep everything. The administration must communicate its plans to the public, unless they want protests to continue.

“Without a plan to balance the budget, we will not be solvent in a couple of years,” Yudof said. “This balances the budget; it stops the bleeding and it maintains the quality for our students.”