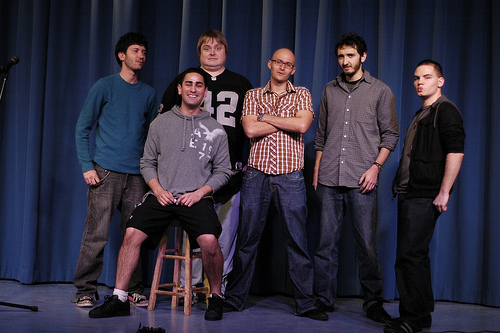 The science of laughter–it is not as complicated at it seems. On Saturday, January 9, the first Laughology show of the winter quarter was performed in Embarcadero Hall. Laugology’s two new co-presidents, Maximilian Robert Lockwood and Mathew Fazio, graced the stage with their comedic talent while introducing the upcoming comedians. Fazio started out the show with an awkward, gaping stare into the audience. He chose his victim from the third row. When the pretty girl told him her name, I am sure she wasn’t expecting to hear the world’s best pick up line, but that’s what she got. Seductively, Fazio replied, “That’s a pretty name, but not as pretty as your smile!!!!” As the audience began to applaud, Fazio took the chance to whisper, “You want to know a secret?????? I have a condom in my pocket.” Let this be a warning to all. The first 3 rows are hot seats, where anyone is open game. To avoid being the butt or breast of the joke, ladies heed my warning: do not wear a low cut shirt or a skirt that barely covers your panties. More than likely, a girl dressed scantily will be noticed, and not by Prince Charming.

Among the comedians was Boe Mendel, a UCSB Alumni, who claimed that racism was on its way out. He soon said the rednecks will eventually become the “drowning polar bear in the icecaps of Obama.” Though extremely handsome, he warned the ladies of the audience that he was in a long distance relationship at the moment. “It’s hard,” he said, “I live in LA, and she lives in the Future.” Of his career choice, he admitted that he had grown up wanting to be a Transformer, but it didn’t work out. Now a comedian, he is surely doing well and will be on the Tonight Show on April 6.


The next comedian, Jimmy Burns, toured with George Lopez. He calls himself the “teacher comedian.” Being married seventeen years, he describes his act as more of a history lesson for IV’s young audience. Raised Catholic, he complained of having to go to confession once a week as a child, and honestly he hadn’t done much wrong. So he made up sins. My personal favorite was when he “smuggled crack into Legoland” I am sure the priest got a kick out of it too.

Drum roll please–it is now time for the headliner. Please welcome to the stage Mr. James Connolly! A frequent guest on HBO and Comedy Central, this man complained of how the world is getting way too overpopulated. He asked, “We humans already eat every other animal, what are we going to eat when those run out?” His answer: “Well, I really like Chinese and Indian food.” He laughed to himself, wondering if his influence was really that powerful and of what the newspaper headline would be the next day– “Comedian James Connolly comes to UCSB; Next day the Chinese are eaten.” The act took on a more serious tone when Mr. Connolly told the audience of how this past year he broke his foot, while standing in his kitchen, thinking. He said, “I think my foot just finally realized what a shitty life it led and committed suicide.” He went to the doctor for his embarrassing condition and found out he had a vitamin D deficiency. This deficiency makes every day athletic activities, such as standing, extremely dangerous for him. And thus the audience must now respect him for the true bad-ass he is. Everyday he risks his bones for entertainment by undertaking the most dangerous job on earth at the risk of his body. He is a standup comedian.

Luckily, the show ended without any injuries. If anyone is looking for a good, FREE time then Laughology is the place to be on a Saturday night. The new presidents make the show very laid-back and entertaining. A first timer at Laughology, Joshelyn Ramirez, commented, “Though odd and unorganized, the show was hilarious and the comedians were great. I will definitely be coming back.” Not only is the show new and improved, but now Laughology is also on YouTube and will soon be posting videos and sketches. Check them out under “Laughology@UCSB.” Better yet, though, just check them out live and you won’t be disappointed.