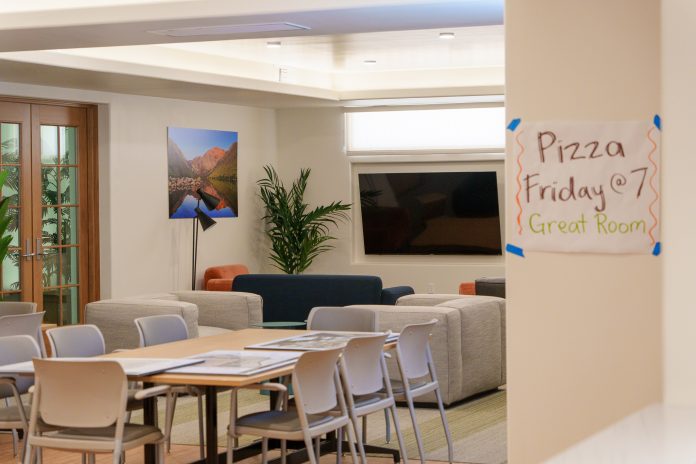 This summer, UC Santa Barbara’s Office of Strategic Asset Management opened a 45 minute tour to the public of their Munger Hall Mock-Ups. As a former resident assistant (RA), I could not miss the chance to see where my future colleagues will work and where future students will live. Together with The Bottom Line’s Editor-in-Chief Ladann Kiassat, here is a photo series depicting two sides of the famous argument of Munger Hall’s creation. I would like to present these photos to you, so you can see the mock-up yourself, uninterrupted.

Hally’s Perspective as a former RA: I always prefer to live with roommates than in a single room, but there are undeniable benefits to single rooms. During my term as an RA, my team spent a lot of time resolving roommate conflicts. Having all single rooms will significantly reduce such occurrences. In addition, the current design of Munger Hall provides a hangout and study space inside the building, as well as a town center with markets, making Munger Hall a very similar (if not better) version of Santa Catalina Hall.

The fake LED panels got me at first — I could see how someone would think these were similar to real “windows.” I know I would still prefer a real window. With this, one sees how Munger Hall destroys the connection between people and nature. While having single rooms is a plus for many people, I am concerned that residents who are experiencing mental health difficulties or drug and alcohol abuse will be less easily discovered. These students may not have access to assistive resources, which could lead to potentially harmful consequences. I’m also not too fond of the name of the building: most of our other residence halls and apartments are named after the Channel Islands (i.e .the “Chi-5s” such as San Nicolas or San Miguel) or lakes (Berryessa in the Sierra Madre Villages). This “Munger” name is just so out of place, in my opinion, and furthers disconnects students from reality and their true environment.