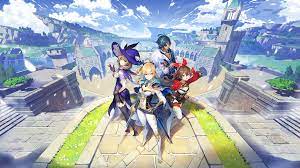 “Genshin Impact” is a free-to-play, open-world role-playing game (RPG) set in the fictional world of Teyvat. Its gameplay and design are similar to that of “The Legend of Zelda: Breath of the Wild,” except “Genshin Impact” adopts an anime aesthetic with cute and quirky characters. With its beautiful landscapes, lore, and music, this game is a worthy pastime for this holiday season. Players can also join with friends to defeat monsters and explore the world together.

As an open-world RPG, “Genshin Impact” allows players to explore maps and complete quests at their leisure. You can take a detour from the main storyline to pick flowers, cook food, or unlock new areas. To get around, users can sprint, climb mountains, and even fly all over the map with wind gliders that resemble wings.

Unlike other open-world RPGs, “Genshin Impact” is also a Gachapon game, or gacha for short. Players use a virtual currency to roll for a random chance at obtaining new characters to use in combat. This virtual currency can be acquired by completing tasks in the game or by making real-life monetary transactions. Rolling is an essential part of the gameplay experience because it allows players to acquire powerful characters with new combat systems.

The overall gameplay experience is fantastic. The combat system works fluidly no matter the device you play on — whether it be a phone, keyboard, or controller. In multiplayer mode, it is easy to match with friends and random players to clear dungeons together. Players can also communicate with each other via a chat function, making it convenient to coordinate plans.

The overall style and design of this game are highly appealing and unique. By using an anime aesthetic, the game opts for stylized rendering of 3D models as opposed to hyper-realistic imitations of reality. This allows a wide range of computers to run the game, including mid-range laptops. Character designs and environments are stunning and distinctive, particularly in the region of Liyue, which was heavily inspired by the architecture and natural landscapes of Guilin, China.

Every playable character is voiced in English, Japanese, Chinese, and Korean, giving users the option to choose the way they experience the stories and lore. The fantastic voice acting and background music are really what bring “Teyvat” to life.

Since “Genshin Impact” is free-to-play, there are issues that come with this model that distinguish it from other open-world RPGs. First, the game is nowhere near complete. While it does have dozens of hour’s worth of gameplay available right now, a great portion of these hours is dedicated to repetitive tasks and mediocre side quests. The quests that go with the main story are rather sparse and locked behind rank requirements, forcing players to find other things to do in between.

Given that “Genshin Impact” is a gacha game, it also means that it retains many notorious features of this model. Unlike one-time purchase RPGs that try to deliver the best experience from start to finish, “Genshin Impact” depends on addicting gameplay that encourages players to log in every day and spend money to gamble for new characters and weapons. The game tries to sustain players’ attention with flashy notification icons and sneaky reward systems that create a false sense of achievement by doling out pennies worth of currency for hard work.

Similar to other gacha games, “Genshin Impact” is “grindy,” meaning that players must complete repetitive tasks to achieve progress in the game. Iterations of these repetitive tasks are locked behind a “stamina” system that inhibits users from completing too many dungeons in one day. This can be cumbersome for those itching to progress quickly in the game without spending any real money.

Overall, Genshin Impact is a great way to kill time during quarantine. It is free and accessible to many people and includes the option to play with friends. Players can explore virtual landscapes, fight monsters, and roll characters to their heart’s content. However, for those looking for an open-world RPG with a complete, immersive story, the Gachapon aspect of “Genshin Impact” may make for an unpleasant experience, whether you are planning to play for free or spend money to gamble.