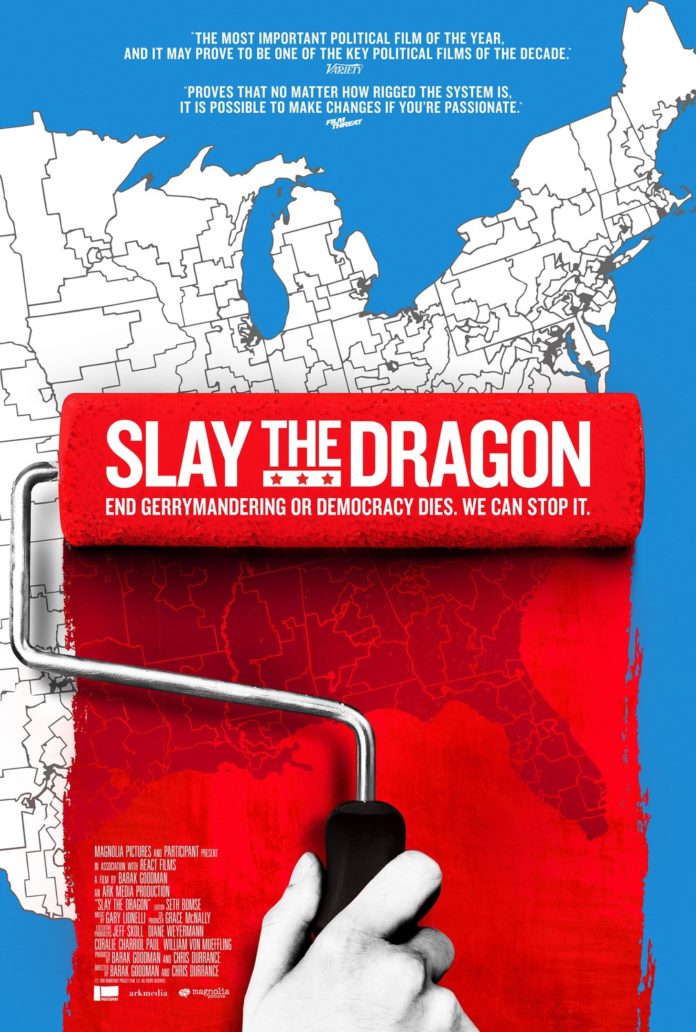 “Slay the Dragon” is a political documentary that focuses on gerrymandering in the United States and the efforts to bring it to an end. It was directed by Barak Goodman and Christopher Durrance and was distributed by Magnolia Productions. The film debuted in April 2019 at the Tribeca Film Festival and is currently available for rental from Santa Barbara’s Riviera Theatre.

One of the main focuses of the film is Michigan’s Voters Not Politicians movement. The film follows the grassroots movement to ban the ability of one political party to draw the state’s district lines and to instead create an independent committee to do so. Activist Katie Fahey leads the way for the movement and fights for the proposal to make it on the ballot through a plethora of struggles. The film does an excellent job showcasing the endeavor of getting the proposal on the ballot through following Fahey through the arduous process and makes the viewer increasingly invested.

An important role in the redistricting process is the census. In accordance with the Constitution, a nationwide census count takes place every ten years in the United States. This process attempts to account for every person living in the United States and its five territories. The census is used in a variety of ways, the most prominent being to determine representation in the Congress and the allocation of funds across states and communities.

This occurs because the political party in power at the time of the census is in charge of drawing the new district lines, which all take place behind closed doors. Politicians use census data to categorize people into political parties in order to create districts that almost ensure that a specific political party will win an election.

“Slay the Dragon” is exceptional at both educating its viewers on the subject of gerrymandering and giving them a reason to care. The film showcases the real consequences of gerrymandering through portrayals of the Flint Water Crisis and Act 10 in Wisconsin, the latter of which restricted the ability of teachers and other public workers to unionize.

There is an amazing contrast of emotions created in this film between the anger felt towards rampant nationwide gerrymandering, and the hope felt towards the grassroots anti-gerrymandering efforts. There is something very powerful about seeing the people of this country come together to unite behind a cause.

Even though there have been efforts in some states to diminish gerrymandering, it still happens in the United States. When gerrymandering occurs, it devalues the votes of the people affected and damages democracy. Another side effect of gerrymandering is the polarization of politics — politicians who don’t have to worry about getting re-elected are far less incentivized to try compromising with the other party.

Gerrymandering can be traced in the United States all the way back to 1812 but has become much more advanced since 2010. This issue is especially relevant in this country now: 2020 is a census and redistricting year. Those interested in learning more about gerrymandering can view each state’s laws surrounding redistricting here.

The SBIFF Riviera Theatre’s website currently offers streaming links to three-day movie rentals for an average of $12, a portion of which goes to the theatre. This movie can be streamed on its website.