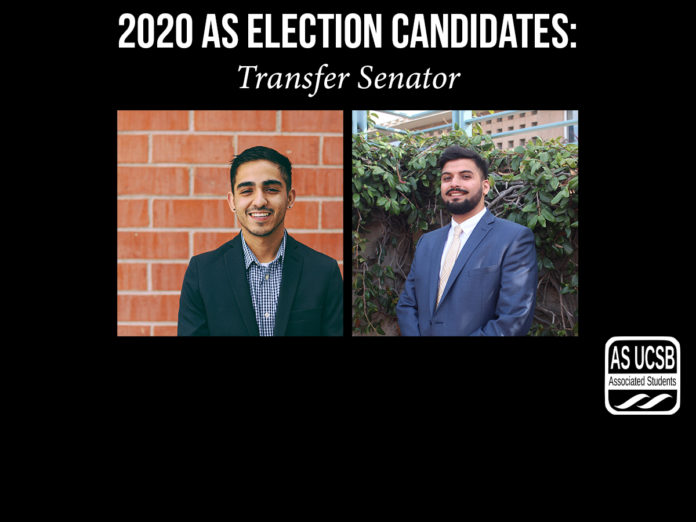 Beginning at 8 a.m. on April 20 until 4 p.m. on April 24, UCSB students have the opportunity to vote in the AS spring general election. On the ballot, transfer students will be able to select a representative on the 71st AS Senate.

These interviews have been lightly edited for clarity and formatting.

What made you decide to run for Associated Students (AS) Senate?

“The social life and the sense of community is the top reason for many to admit to UC Santa Barbara (UCSB). Students come from different socioeconomic backgrounds and yet interact and flourish together. This is the norm in this university for years and it has shaped our values. I’m running for the Senate to ensure the affirmation of those values. Although it’s my first year here on this campus, I’ve noticed not everyone in AS shares those values. In order for this vision to continue existing, I will make sure equal opportunity is offered to each and every Gaucho no matter where they come from and additional resources are allocated for students who come from traditionally marginalized populations. At the same time, I am running to assure a depolarized campus that truly reflects the highly interactive norm that we experience in our student body. My platform will leave no room divisive and ideological partisan efforts.”

Which communities do you hope to represent on the AS Senate?

“First and foremost, I’m intending to represent the transfer community. Being a transfer is a different journey than what most experience in UCSB. Within a two-year period, we have to learn the ins and outs of the entire campus in addition to building necessary relationships and fulfilling our own career goals. I’m also a proud member of the Middle Eastern community as well as the Jewish community — both of which are heavily marginalized. When I arrived at UCSB, I had the opportunity to fight for these underrepresented communities which is why I started Iranian Jewish Club (IJC). In addition to mobilizing minority student leaders, we successfully bridged Jewish institutions such as the Santa Barbara Hillel with the Middle Eastern Resource Center (MERC) in order to empower Jews of color as well as involving the Jewish student body with the MERC.”

If you could only accomplish one thing in your term, what would you prioritize?

“My first step as your transfer senator is to create a recovery committee that is going to address the global pandemic. The effects of this pandemic on the school and the student body manifests itself in two different aspects. One, it is creating a new status quo that is entirely transforming the way we learn, study, engage, and frankly live. Two, once this is all over, I am certain that as of today, our system is not capable of recovering and it will be overwhelmed in every way. We do not have a choice but to take the proper measures that will deliver the smoothest transition possible.”

What made you decide to run for AS Senate?

“I just transferred to UCSB this year and within my two quarters here so far, I have seen a lot that needs to be addressed. From the assaults that have taken place in Isla Vista and the lack of adequate communication/outreach from the university, I believe there is much to be done. I wanted to run to help rebuild the trust students have in the university. I wanted to run because I am no stranger to the student government having been involved in high school and my two previous colleges. I believe this experience will help me in my attempts to bridge the gap between AS and the general student population. I wanted to run because the students deserve to have their needs addressed and resolved. No more empty promises from our student leaders and our administration. Those are just a few of the reasons why I chose to run.”

Which communities do you hope to represent on the AS Senate?

I plan to also represent the communities and identities that have shaped me into who I am today. I am a low-income first-generation bisexual Mexican student. Along with transfer students, I hope to bring LGTBQ+ and Latinx communities into the conversation. I don’t just plan to stop there. There are several challenges that impact all of us, not just transfer students or Latinx students. Intersectionality is important and our issues must be solved with it in mind. Besides advocating specifically for transfer issues as transfer senator, I hope to be a voice for all UCSB students in a system that continues to leave them behind.”

If you could only accomplish one thing in your term, what would you prioritize?

“If I was only able to accomplish one thing during my term as transfer senator, I would prioritize adjusting the eligibility requirements for a non-traditional transfer student. By doing this, I hope to allow more transfer greater access to aid and accommodations when it comes to housing and registration. For example, currently some requirements are you must be at least 25, and/or be a veteran, and/or have a dependent. I want to expand that to include students who are financially independent, students who are official/unofficial caretakers, and lower the minimum age to 22 years or older. There are many different paths and journeys transfer students take to complete their education and I want to better support those who are still pursuing an education. There is so much I want to do during my term but if I had to pick one item to accomplish, I believe that could benefit the most students.”