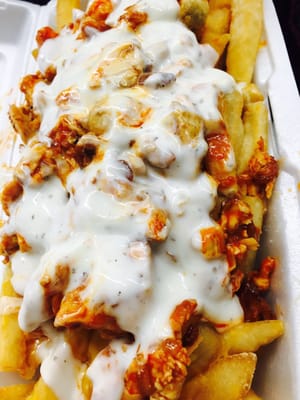 But there’s more to IV Deli Mart than its iconic buffalo chicken cheese fries. The deli is home to a wide selection of unique specialty fry options, with fusion flavors that encompass everything from Mexican to Asian flavors. Read on to see how they matched up against each other in my quest to discover the best fries at IV Deli Mart.

Cheeseburgers and fries usually go hand-in-hand, but the bacon cheeseburger fries at IV Deli Mart prove that even a time-tested combination can be botched. The best way to describe this dish would be “deconstructed cheeseburger thrown haphazardly on fries.” These fries featured whole hamburger patties chopped into large flavorless squares, whole tomato slices buried under uneven pockets of soggy shredded lettuce, and long onion slices drowned in a copious amount of thousand island sauce. The only distinguishable flavor came from the thousand island sauce, which quickly made the fries soggy and nauseatingly creamy.

The bacon cheeseburger fries could easily be improved if the meat and vegetables were diced and less sauce was used, but they were easily the worst-tasting fries in the taste test.

Chorizo at IV Deli Mart? Customers have fair reason to be skeptical, especially because these fries were far from authentic or delicious. Topped with Mexican beef chorizo, ranch, and cheese, the Dirty Andrew fries suffered both from a lack of flavor and excessive saltiness. The chorizo lacked the spiciness of typical chorizo and was extremely salty, and the ranch contributed little to the flavor profile of the dish.

Specialty fries are most delicious when flavorful toppings are married with the neutral goodness of french fries. Instead, this dish purely tasted of salt and little else. Those in search of Mexican flavors will be better off supporting one of Isla Vista’s many Mexican restaurants.

Despite originally starting as a Middle Eastern restaurant, IV Deli Mart’s gyro fries were sadly underwhelming. These fries, which combine gyro meat and tzatziki sauce with the deli’s iconic cheese-fry base, fail to highlight the strengths of its components. Tzatziki sauce is typically characterized by a complex flavor profile with elements of lemon, garlic, and cream. IV Deli Mart’s rendition unfortunately was a mere echo of these flavors. With a mild and only subtly garlicky taste, the gyro fries ultimately ended up tasting bland and incomplete.

The best part of this fry dish was the crispiness of the gyro meat, which held up even when buried in sauce. However, the lack of flavor in these fries keeps it from rising in the fry ranking.

This off-menu fry option can be made upon request, and it’s definitely worth the extra effort. Unlike buffalo chicken cheese fries, which suffer from being too vinegary to be eaten for an extended period of time, BBQ chicken cheese fries represent a perfect balance of flavors. Tangy and smoky BBQ sauce is contrasted by the creaminess of ranch, carefully plated on top of a bed of crispy chicken and french fries. These fries aren’t the most adventurous or unique — they taste exactly how you’d expect them to taste like — but they do offer a delicious flavor combination that you won’t get tired of.

If you’re looking for a “safe” choice at IV Deli Mart that’ll still satisfy your craving for salty, saucy goodness, BBQ chicken cheese fries are the way to go.

Picture this: crispy teriyaki grilled chicken lovingly drizzled with spicy mayo and cheese on top of a bed of steamy, delightfully crispy french fries. Although this combination of ingredients might seem unusual at first glance, the flavor combination that it creates is incredibly addictive. These fries feature subtly sweet teriyaki sauce contrasted with the kick of spicy mayo and savory cheese. For those who value texture, the grilled chicken in this dish retained its crispiness long after the fried chicken on any of the other fry selections.