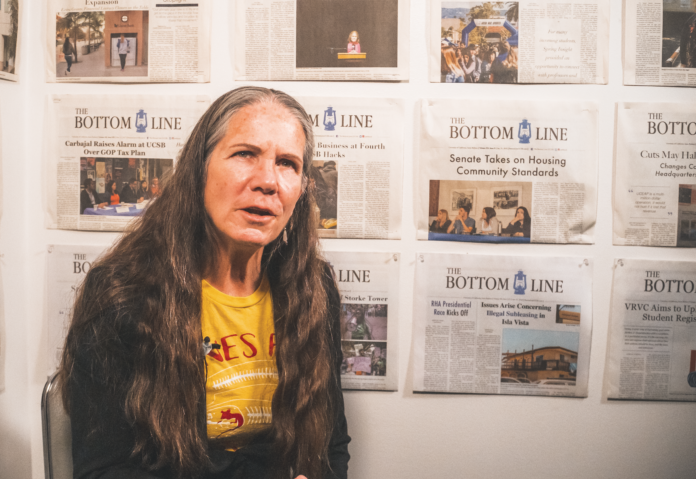 Jones currently serves as a Santa Ynez Community Services District board member, and she distinguishes herself from her opponents, Joan Hartmann and Bruce Porter, by focusing on issues that affect Santa Barbara County’s rural character. But, unlike Hartmann or Porter, Jones doesn’t have many specific policies that would address the UC Santa Barbara (UCSB) student body’s concerns.

But Jones is skeptical as to whether or not UCSB students actually face food insecurity, and as of now she does not have a plan that would specifically address food insecurity among students.

“Food insecurity is a great sad story. But, I just don’t think that anyone who is affording this school’s tuition can really cry poor,” she said in an exclusive interview with The Bottom Line. “When you decide to come to UCSB you might have to borrow enough to pay for a food plan. You guys have cafeterias here. You can get a job, and that’s a kind of solution. But don’t hold your hand out, and don’t use tears. Using tears is as bad as bullying.”

Many UCSB students and Isla Vista residents have also voiced concerns about the climate crisis and how it has impacted the worsening fire season in Santa Barbara county. Jones believes that wildfires are a safety concern, but she does not believe that climate change has anything to do with it.

“Public safety is the number one duty of the county, and with wildfires you need to be prepared to act with roads and access to wilderness areas, but I do not believe in the climate change crisis,” Jones said. “I think that it’s an alarmist point of view, and that’s very troubling. I would appeal to students to question climate science instead of being scared and paranoid.”

Another environmental concern among voters is active cliff erosion, which could cause a collapse that would devastate the ocean real estate on Del Playa Drive.

Jones admitted that she was somewhat uninformed on this issue, but she believes that this issue should mostly be left up to private property owners, not local government.

“I’m not an expert on cliff erosion, but it doesn’t make sense to build near the ocean. I think a lot of the responsibility needs to be put on private property owners,” she said. “I don’t think that people who aren’t subject to erosion should be responsible for paying for people that chose to live on Del Playa. I don’t know how involved the government should be; I need to know more.”

When describing her platform, Jones made it clear that her main concern is preserving the integrity of rural areas in Santa Barbara county, which falls outside of UCSB and Isla Vista.

“My platform is about protecting the rural character of the Third District. The main thing that I would want to talk about with students and Isla Vista residents is how corporate marijuana is having a very negative impact on the rural part of the district,” Jones said. “I’m concerned that our nice ranching area with open space is gonna be taken over by a bunch of aggressive corporate marijuana enterprises.”

When asked to describe some of her specific policies designed to benefit the student community, Jones said that her philosophies of “personal responsibility and individual liberty” would benefit students.

“I believe in liberty for all people and I believe in personal responsibility,” Jones said. “There’s a lot of monolithic thinking on college campuses; students should think of themselves as free agents instead of part of a victim group.”

“These ‘sad groups,’ the homeless people, the gay people, the women, are groups that people settle into, but I don’t like this victim culture we have, because victims are never victors and justice is always a consolation prize.”

Want to make sure your voice is heard when it comes to Isla Vista affairs? Be sure to show up to the polls on March 3.