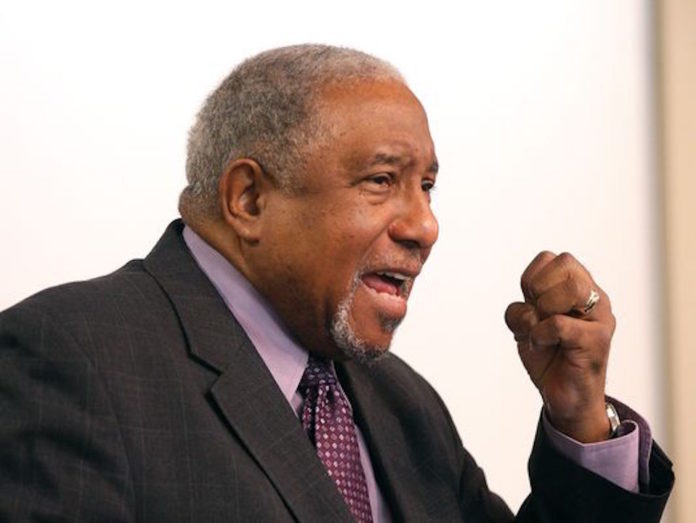 To celebrate Black History Month, on Feb. 20, the UC Santa Barbara Associated Students (AS) Program Board hosted “An Evening With Dr. Bernard Lafayette Jr.,” where Lafayette, a former leader of the civil rights movement, delivered remarks about the importance of nonviolence in times of civil unrest.

Born in 1940 to an impoverished Florida family, Lafayette repeatedly witnessed the effects of racist southern laws and norms on society prior to the civil rights movement. Provoked and inspired, Lafayette joined the Student Nonviolent Coordinating Committee, where he attained a prominent position, later going on to become a leading figure in the nonviolent resistance movement.

In 1967, Dr. Martin Luther King Jr. took special notice of Lafayette and hired him to be the director of the Southern Christian Leadership Conference. The two worked closely together during the Poor People’s Campaign, a movement calling for further national equality and justice, until Dr. King’s death. From then, Lafayette helped keep the program functioning in accordance with Dr. King’s values until a lack of fiscal endorsement caused the program to end in 1968.

Dressed in a classic purple suit, Lafayette nonchalantly made his way to the podium in Isla Vista Theater and spoke in soft tones about his experience protesting nonviolently. “I have been arrested 27 times,” said Lafayette. “But then I counted on my fingers, and it turned out to be 30 times because three of the times I was arrested, I was already in jail. They just put me in solitary confinement.”

“I was one of those in the movement who tried to avoid arrest. Even with my efforts to avoid arrest, I ended up with thirty … You have to be willing to accept the consequences when you refuse to obey an unjust law,” Lafayette explained, describing the possible ramifications even peaceful protesting may bring.

Lafayette’s willingness to accept these consequences made him an unyielding member of the Freedom Riders protests, a civil rights initiative which saw mobs of integrated activists ride buses into the South asking for systematic equality.

During a particular protest turned violent, the Ku Klux Klan disrupted a Freedom Riders rally, beating Lafayette and members of the group, with some barely escaping death. With sincerity echoing from his stern yet smooth voice, Lafayette credited the origin of these racist hate groups to a disturbingly simple notion:

“What the whole thing is about is color. They had to find some kind of way to distinguish people from each other; so they go by color,” Lafayette explained. “Your ability to respond to hateful action is the key to bringing about the change,” Lafayette said in regards to countering this cruelly bigoted mentality.

From then on, Lafayette laid out the elementary components of nonviolent protests. There is a tactical process in obtaining power: knowing when to renounce one’s efforts in protest and when to directly conduct vehement action. This process correlates to the existing hierarchy that methodically dictates against minorities.

To explain this concept, Lafayette referenced Dr. Martin Luther King’s definition of power: “Power is the ability to get the power structure to say ‘yes’ when all the time they’ve said ‘no,’ the ability to either withdraw or supply needed resources.”

Following his speech, Lafayette then went on to accept questions from the audience about a myriad of topics ranging from whimsical arguments with Dr. King to the heavy-handed strategies of the Black Panther Party.

As a defining point of his speech, Lafayette calmly proclaimed, “We didn’t choose which group we were gonna be born with. You don’t make those decisions. All you do is show up, and then you show down, after you act up.”