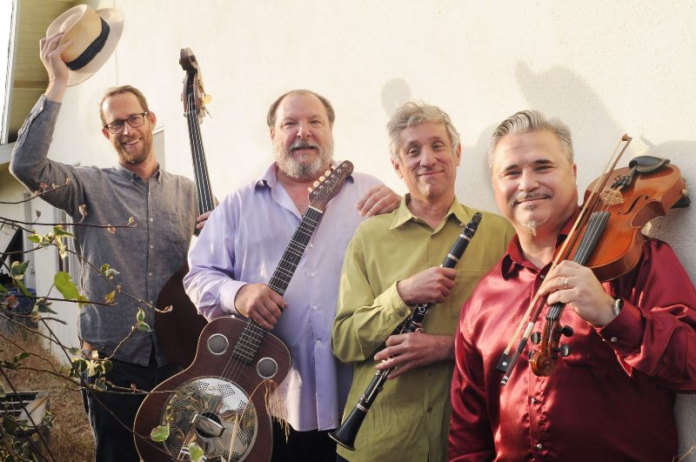 Klezmer and Balkan music group Kalinka gave a virtuosic performance of unique music in the U.C. Santa Barbara (UCSB) Music Bowl on Wednesday as part of the World Music Series, a musical event series put on by the UCSB MultiCultural Center and the ethnomusicology program of the department of music. The band is comprised of musicians Fred Nadis on clarinet, Eric Ederer on acoustic guitar, Beznik Yzeiri on violin, and Andrew Fedders on bass.

Despite being part of the World Music Series, the musical genre klezmer did not originate from one singular region. It is a form of Jewish music that flourishes wherever there are prominent Jewish communities, so its sound draws heavy influence from all over the Mediterranean, Eastern Europe, and the Middle East. As for its usual setting, klezmer most often is performed at weddings and other similar events.

Kalinka performed for students of all ages and backgrounds on a beautifully clear day at the UCSB Music Bowl, a small outdoor music venue. The audience was languid and pleasant; they quietly listened and saved applause for when the music ended.

The music being played by Kalinka was unlike any other music that is often heard on the radio or the Internet. They started with some slower tunes which juxtaposed a bouncy, swing-like rhythm from the bass and guitar with an oddly exotic and regal melody from the violin and clarinet. The faster pieces kept the same dynamic but were played with an even more distant marriage between rhythm and melody. The fast pieces had the bass and guitar be relentlessly jovial and danceable while the clarinet and violin would double up on an even more mind-boggling melody.

The melody alone might strike one as sounding rather Middle Eastern and modal, as it often has an emotional complexity that Western ears might not be prepared to process. Likewise, the rhythm section stripped of the melody might find itself at home in a jazz piece or perhaps even American folk.

Combined, however, the music that makes up klezmer is wholly unique and cannot be supplemented by any other type of music. The driving and forceful rhythm keeps the pensive melody from dwelling too intensely in deep sorrow, giving the music a refreshing sense of dutiful sorrow contrasted with festivity.

This concert peaked with a piece called “Sirtaki.” According to violinist Beznik Yzeiri, it was a piece put together using multiple themes with Greek influence and style. This was a fiery performance in which Beznik proved himself a true virtuoso violinist. The song began with a mischievous melody from Fred Nadis’s clarinet, which was soon matched by the violin. The violin and clarinet combo had a triumphantly clear texture, but this melody was soon overtaken by a fierce violin solo.

Rife with tempo changes, double stops, pizzicato, trill, and tremolo techniques, the solo stole the show for quite some time. The skillful performance sacrificed no emotional beauty for its virtuosity, as the aforementioned emotional themes were at their strongest in this piece. The solo ended with the clarinet joining the violin in an overwhelming and intertwining polyphony, soon transitioning into a coda and ending the beautiful piece. The audience obviously felt the same as me, as someone even gave the band a tip when the song ended.

This beautiful performance fit well with the skills that past performers have displayed for the World Music Series. All people and students who are interested in world cultures and music will be doing themselves a favor by attending this series every Wednesday this quarter, so please look forward to future performances!