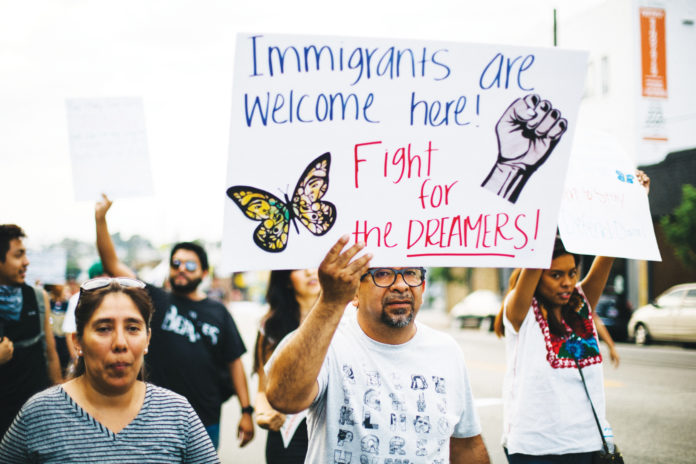 Rubalcava remembers her days as a first year as particularly difficult due to the election of Donald Trump during winter quarter. So many of her peers supported Trump’s immigration policies which were aimed at removing Rubalcava from the country. Specifically, she remembers a hallmate of hers cheerfully running down the halls chanting “Donald Trump … Donald Trump.”

This same hallmate somehow also found out about Rubalcava’s legal status and directly confronted her, claiming: “I don’t have anything against you personally. You just shouldn’t have immigrated here illegally.”

Stories like hers relate to the 4,000 undocumented students enrolled in one of the ten U.C. campuses.

Events held included a thorough seminar on policies affecting immigrant communities, a lecture with the Latina filmmaker Anayansi Prado, and a screening of her revealing documentary, “The Unafraid.” The film and lecture drew on the overwhelming obstacles undocumented students face in simply remaining enrolled at universities.

When asked for her advice on these struggles, Prado, a once-undocumented student herself, said, “Form community and come together … hold each other in space. When one is down the other one holds you up, and then you all get up again.”

Rubalcava, an English major, was brought to the United States at six months old from Jalisco, Mexico. Throughout high school her advisors could only offer minimal support and failed to appropriately help Rubalcava in applying for federal financial aid.

Although living in California for virtually her entire life, she was charged with full out-of-state tuition.

The only financial aid Rubalcava currently receives are scholarships sponsored by UCSB, but even obtaining such scholarships was tremendously difficult as she had to “basically beg the school” to waive her out-of-state tuition and offer her financial aid.

Although UCSB eventually waived her tuition, eviction notices would be placed on her dorm door promptly asking her to leave.

Rubalcava believes that UCSB in general tries to be inclusive and that the majority of the students are nice and welcoming. Nonetheless, she revealed that she often feels anxious and isolated.

“Every time there is talk about DACA [Deferred Action for Childhood Arrivals] … it starts to give me a lot of anxiety and it starts to get hard to focus on school,” Rubalcava described. “My future is in jeopardy. Sometimes it gets kind of depressing … If I do get kicked out of the country, all of this was for nothing, going to school and putting all this effort.”

“It feels like I can’t really be myself or talk to other people about what I’m going through because no one really understands.”

The Dream Act, a legislative proposal which would grant residency to certain students who entered the country as minors, has not been passed by Congress. DACA work permits are currently only available to recipients who were part of the program before late 2018, when president Trump nulled the policy.

Free legal services and advice are provided by Undocumented Student Services (USS) to undocumented students and their immediate families at UCSB.

In an interview with The Bottom Line, USS director Diana Ordorica, described Immigrant Resilience Week as an event which “raises awareness for … different experiences that the immigrant communities might have.”

Ordorica added: “If there’s a desire to wanna find community, we and other folks … provide that community and that support.” She encourages immigrants to “seek for help, even though that can sometimes be hard.”