The film “Bombshell” has received resounding critical acclaim for its authentic, engaging portrayal of the female journalists and news correspondents — namely Megyn Kelly and Gretchen Carlson — who exposed Fox News CEO Roger Ailes for his repeated incidents of sexual assault.

The film stars Nicole Kidman, Charlize Theron, and Margot Robbie, who each brought incredible depth and range to their respective roles, switching seamlessly between the film’s comedic moments and the grim realities that the film centers around.

In a post-screening discussion on Nov. 21 at Pollock Theater here at U.C. Santa Barbara, Jay Roach attributed much of the film’s success to the three lead actresses, who embodied the women behind the Roger Ailes exposé.

Roach cited lead actress Charlize Theron as the real driving force behind the project, as she produced the film and starred as main character, Megyn Kelly.

“She became the nucleus at the center of it that was driving this story and the producing around it,” he explained during the screening. “Charlize initially didn’t know if she could play the character because her political beliefs are so different than Kelly’s, but she related to a woman who is strong, opinionated, and assertive and who is labeled unfairly for those qualities, which I think translated into an incredibly strong performance.”

Nicole Kidman starred as Gretchen Carlson, the first Fox News correspondent to file a suit against Ailes for allegations of sexual harassment and assault. Since Carlson signed a non-disclosure disagreement (NDA) about her experiences while working at Fox, the film’s crew were tasked with investigating her story independently and Kidman was instrumental in filling in the gaps of this complex character’s story.

“Nicole Kidman really told a lot of her story through character design because Gretchen couldn’t talk to us due to her NDA, so she pushed the screenwriters to push her story forward in a realistic way,” Roach revealed. “Carlson really sacrificed her career in order to tell her story, so it was really important to Nicole that she do the character justice.”

In many ways, Popsil’s scenes were the most difficult to watch as they explicitly depicted Ailes’ sexual misconduct, which demanded a very emotionally charged performance on Robbie’s part.

“In the scene where Robbie was re-enacting the explicit sexual harassment scene between Popsil and Ailes, the actors and the crew were extremely uncomfortable, which was in large part because Robbie completely embodied the character and it really makes you realize the gravity of the situation,” he explained.

“Women often come up to us after watching this movie to tell us how refreshing it is to see how harassment and the obligation to placate harassers is told in a realistic way, but it’s even more rewarding to hear men tell us that they had no idea what that experience was really like, so I’m glad that this film is helping people empathize with these experiences,” he said.

Roach concluded the post screening discussion by describing the impact that the film has had on test audiences, specifically how it has impacted these audiences’ perceptions of sexual harassment and assault by showing sexual violence from the survivor’s point of view. This screening and post-film discussion with Jay Roach showed how film and media can educate audiences about important social issues like sexual assault in accessible, engaging ways.

“Parasite” Enthralls with a Chilling Commentary on Class 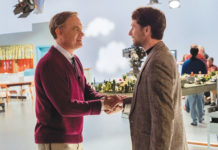 Script to Screen: Pollock Theater Screens “A Beautiful Day in the Neighborhood”