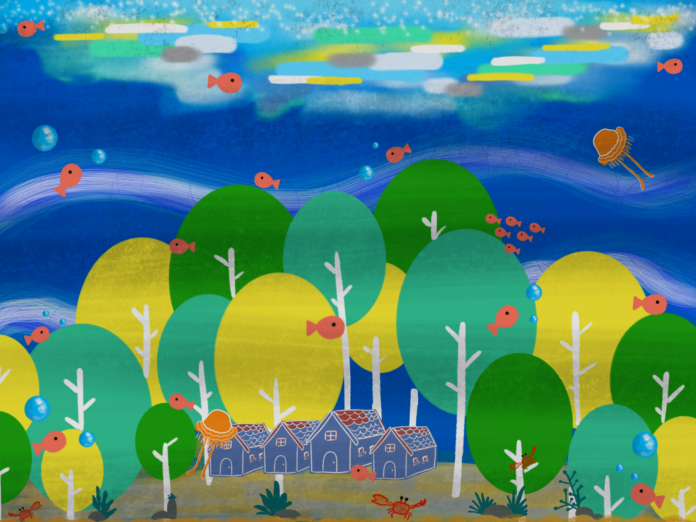 On Oct. 14, the UCSB Library (in partnership with the Office of the Executive Vice Chancellor) announced that the official book selection for UCSB Reads 2020 would be “Rising: Dispatches from the New American Shore,” a creative nonfiction novel by acclaimed author Elizabeth Rush.

“Rising” examines the severity of rapidly rising sea levels across the United States by capturing first-hand accounts of life on the so-called “New American Shore” — an all-encompassing term that refers to coastal areas like the Gulf Coast, Miami, and New York City.

Of the six novels on the short list, “Rising” best fit the conditions set forth by the UCSB Reads book selection criteria, which dictate (among other requirements) that the committee’s chosen novel must be “intellectually stimulating,” able to be “incorporated into the UCSB curriculum,” and capable of “enabling strategic partnerships between the library and campus or community entities,” according to the Library website.

The decision by the UCSB Reads advisory committee marked the end of a comprehensive selection process. The advisory committee first convened last spring and began soliciting advice and book suggestions from faculty, students, and staff before finally settling on a short list during the summer of 2019.

The importance attached to the annual selection of each UCSB Reads novel is reflective of the impact that the UCSB Reads program has not only at UCSB, but also in the city of Santa Barbara. The UCSB Reads program began in 2007 as a way to introduce UCSB, along with the larger community of Santa Barbara, to a thematically-rich, interdisciplinary novel written by a living author. Each year, community members and UCSB residents have the chance to attend a variety of free events centered around the novel, including faculty-led panels, film screenings, and book clubs.

The 2020 UCSB Reads program will officially kick off during winter quarter with a free book giveaway for students on the first floor of the library. From January until May, the library will sponsor a series of free events exploring “Rising’s” themes. Faculty members are encouraged to incorporate the novel into their classes, and every student enrolled in those classes will receive a free copy of the book.

In the library’s recent announcement, the selection committee specifically acknowledged “the power and relevance of the book’s stories about the people and communities most at risk from sea level rise.” “Rising” is especially poignant for Santa Barbara residents and UCSB students, who come from all different areas of California, the country, and the world but are bound together by a shared appreciation of the beautiful Santa Barbara coastline.

In an interview with The Rumpus, Rush stated that her goal was to explore this sense of forced camaraderie through the “the lived experience of climate change.”

“People all over this country [the United States] and the world — we’re all finding ourselves in the same soggy position with a set of limited options,” Rush added.

Students interested in hearing more about Rush’s message and her vision in regards to the novel will be able to hear from her directly when she visits UCSB on May 4, 2020 for an intimate Q&A session hosted by the UCSB Library in conjunction with the Arts & Lectures program.

In addition, UCSB Reads is hosting a winter and spring art exhibition in 2020 for the first time in the program’s 12-year history. The showcase will solicit student, faculty, and staff contributions for an exhibition centered around “Rising’s” themes. The Q&A, art show, and the general events are all part of the program’s vision, which aims to create a more interconnected, stimulating, and thought-provoking dialogue throughout the community.

Editor’s note: A full calendar of UCSB events centered around “Rising: Dispatches from the New American Shore“ can be found here. If you are interested in participating in UCSB Reads events or contributing to the selection process for the 2021 UCSB Reads novel, please contact Alex Regan, Events and Exhibitions Librarian at UCSBReads@library.ucsb.edu, or fill out the suggestion form here.