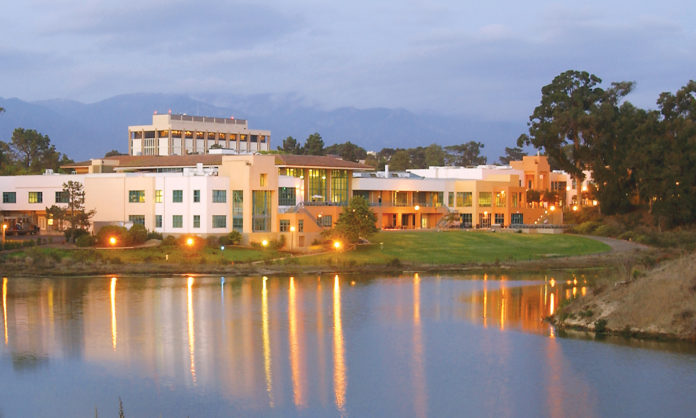 A haunting cadence of vowels echoed through the Hub last Wednesday night. As the air grew colder in the room, it was uncertain whether the draft hitting one’s face was just from the ceiling fan or from something far more supernatural on campus.

That evening, renowned psychic Patti Negri came to UCSB for a mystifying engagement with the other side. First years and graduate students alike came to see her show, which consisted of a debrief of her work, a questions forum, and a seance.

Ever since she was four, Patti Negri has claimed to have seen supernatural beings. She has even appeared in several television shows; on “Mansion Hunters” she conducted a black dahlia seance in the Lloyd Wright house, and made contact, she says, with Charlie Chaplin’s spirit on a Haunted Hollywood episode of “Ghost Adventures.”

Her ability, she explains, is adaptable with a simple openness to what lies beyond the physical world. Negri refers to the supernatural as what lies “beyond the veil,” and she sees the supernatural as the overlap between creative and logical thought. Dubbing herself a “white witch,” Negri is a medium with exclusively positive connections with the spiritual, from spirit guides and elementals to the ghosts of our loved ones.

That evening, the Hub was cloaked in darkness, lit only by a few colored spotlights shed upon Patti Negri. Dressed in flowy black clothes with ornate jewelry accents, Negri carried a specific air of mysticism. The eerie, chilling atmosphere of the room definitely fit the events to come.

Negri began her exhibition with an explanation of the supernatural world, saying that anyone can engage with the spiritual if they don’t deny the signs they perceive. She also believes in free will, but says that magic helps us realize the path best fit for us. In her eyes, the spiritual world reflects the physical world; how we live on earth is how we will live in the afterlife.

Several people came forward looking for spiritual counsel. Some individuals just wanted to know where they would be in five years or how they could contact spirits in their own homes. Negri’s responses appealed to a particular aspect of each person’s character, even pointing out one student’s potential for psychic power.

Negri answered every question, but still clarified that everyone has the power of free will. In this way, she makes her predictions not foretellings, but suggestions for the future.

She ended the night off with a seance, starting with a chant-like series of vowels to, as she puts it, “lift the veil” between the physical and spiritual worlds. The lights went dim and the room went silent as Negri rang a bell.

According to Negri, spirits did exist in the Hub, from the ghost of a grandparent with open arms to a bunny running across the floor. While not everyone believes in the supernatural — myself included — even I felt a chill run across the room as the seance continued.

Negri drew in an audience of believers and nonbelievers alike. Some students simply came out of curiosity, while others sought answers to unresolved sights or experiences. Skeptics got an opportunity to see how a seance is performed while believers got an opportunity to engage with their spirituality. Either way, it definitely wasn’t an ordinary Wednesday night, especially with midterm season coming to a close.