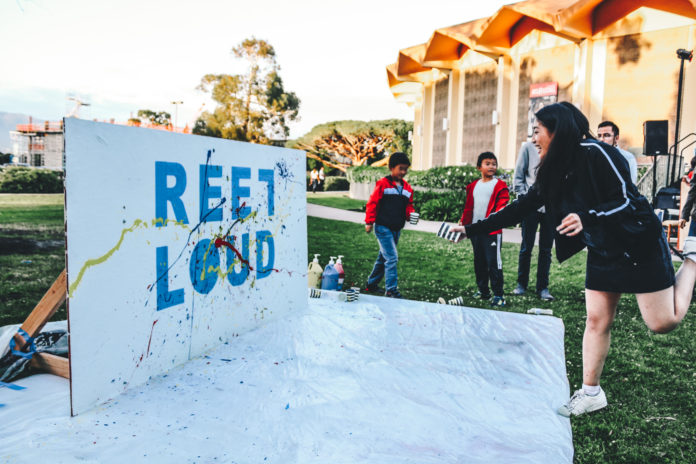 It’s quite a rare opportunity to be able to observe the future talent of cinema all coalesced in one student event. UCSB’s 28th annual REEL LOUD Film and Art Festival was an example of said event, bringing together some of the most talented student directors from UCSB and allowing them to showcase their short films to the public.

The festival is a student-run event that highlights some of the best talent UCSB has to offer, ranging from art to music to dance and most importantly, film. The night is a love letter to the performing arts of UCSB.

The night truly began once the doors to Campbell Hall opened, and the audience rushed inside to find seats for the screening of the films. Before the event started, REEL LOUD had a small art showcase outside the hall, as well as performances from Anahita Holden, the Korean pop dance group SS805, and the acapella group InterVals.

The festival showcased twelve silent films which were all accompanied by live music performances and voice acting. The films that premiered at the festival were “Blacklight,” “January, 1996,” “Genesis,” “Ravaged,” “A Question,” “Mapache, Ataque!,” “Sorpresas: A Salsa Noir Film,” “Invidia,” “The Practitioner’s Circus,” “The Irresponsibles,” “Daisy,” and “Saawaryia.”

Each film of the night showcased some amazing talent, but a few especially stood out.

Both “Genesis” and “The Irresponsibles” were highly experimental films with thought-provoking avant garde shots. “Genesis,” which was directed by Yelizaveta Mamajeva,  a fourth-year film and studies major, had some very simplistic but horrific imagery that visualized the pain of a drug addict. “The Irresponsibles,” which was directed by third year film and studies major Josh Bevan, was a slightly confusing yet beautiful journey that evoked a feeling of adolescent confusion.

Another interesting film of the night was the fourth-year film and media studies major,  Damien D. Bell’s “Blacklight,” a philosophical film on the idea of success. The film follows a boy experiencing a multitude of realities in which he finds success, but is ultimately horrified by the harshness of reality. The film also comments on how race plays into this notion of success, which is an idea that is not generally discussed in cinema.

The crowd-pleaser film of the night was “Mapache, Ataque!” which was directed by Nick Counter, a fourth-year film and studies major. The film follows the battle between a 300-foot giant Joe Gaucho and the brave El Mapache. The film was unironically inspired by old Kaiju and B-movies, which could be seen in its low-budget cardboard sets and low quality costumes.

The last notable film of the night was the third-year film and media studies major, Immanuel Steinberg’s “January, 1996.” Its professional production and emotional storyline had audience members crying over the compelling story of a man coping with the death of his mother a mere five minutes into the film.

As the night drew to an end, REEL LOUD brought in Vivian Storm, UCSBreckin’, and Joe Yuke, a student comedian from Laughology, to entertain the audience. Before the award ceremony, the Elektro Botz from NBC’s World of Dance performed with dancers from UCSB.

In an interview with The Bottom Line, Issac Haskins, a fourth-year theatre major and one of the students who performed alongside the Elektro Botz, mentioned that “we learned it [the choreography] at the master class, from one to two. And then came in at four — to run it a couple times.”

After the performance, the producer of this year’s festival, Mika Pham, a third-year double major in film and media studies and communication, invited the Rally Rig team out onto the stage. Led by D’vonte Johnson, a fourth-year film and media studies major, the team of engineers had created a camera rig that assisted people with impaired motor function and were presented with a check of $1,500 to support their ideas in making the joys of cinema accessible to all people.

The night ended with the award ceremony during which, this year, the organizers of REEL LOUD added two new awards, Best Directing and Best Writing, to the ceremony. “The golden reel picture is no longer just one stand out. We had to define, that it [the award] has to go to the best picture, but we still wanted to highlight films with certain awards like writing and directing,” said Pham to The Bottom Line about the two new awards.

When it comes to the awards, Best Art went to “Untitled” by Joyce Tsui, Best Music went to “Ravaged” by Nina Masjedi, Best Cinematography went to “Daisy” by Cameron Leingang, Best Editing went to “Blacklight” by Damien D. Bell. Both the Audience Choice and Scott Wells awards went to “Mapache, Ataque!” by Nick Counter, and both of the newly added awards, Best Directing and Best Writing went to “January, 1996” by Immanuel Steinberg.

To learn more about REEL LOUD or find out how you can get involved next year, visit their website www.reel-loud.com.