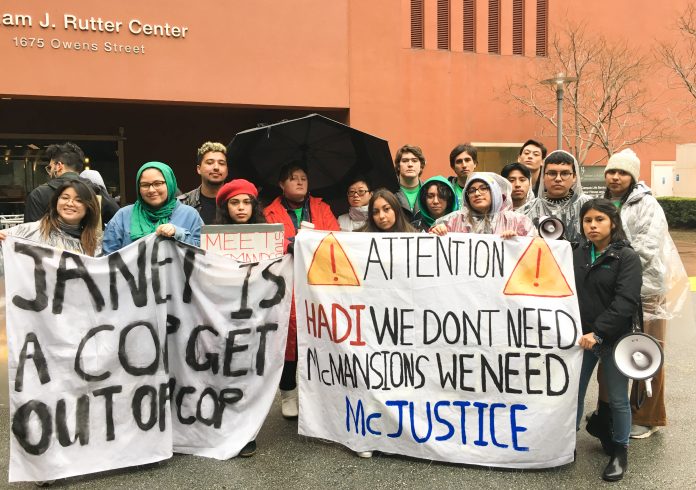 Student organizers in support of fair contracts for UC workers gathered at the UC Board of Regents meeting on Wednesday to address the Regent’s inaction towards a list of demands presented in the fall that call for, among other issues, livable wages and stable benefits for all UC workers.

On the second day of the regents meeting held at UCSF Mission Bay, students from all nine undergraduate UC campuses spoke during the extended public comment session, urging Regents for more student involvement in addition to having all the demands met.

The demands, led by UC-Wide Student Coalition for Campus Labor Justice (USLAC), were presented back in November, which sought to provide fair and equal opportunities for UC workers and students from historically marginalized communities.

The contract-specific demands request pay increases to keep up with the cost of living in California in addition to protecting healthcare benefits for workers. Other non-labor-focused demands include restricting police force presence during student and worker actions and divesting from contracts with partners involved with pro-deportation matters.

In December, University of California Office of the President (UCOP) released an initial response to the demands. In it, Vice President of Systemwide Human Resources Dwaine Duckett calls American Federation of State, County and Municipal Employees (AFSCME) reports of pay inequities “not valid,” adding that there is “no difference” between the salaries of women of color and white males. More detailed responses would be released later.

But students and workers are not satisfied with the regents’ passivity as thirteen different speakers urged action on the demands.

In a response to the policing issues expressed in the demands, Senior Vice President Alexander Bustamante promised to hold two town hall meetings at UCI and UCSB in January to meet with students in person and address their concerns. As of yet, organizers have not been given a date for the town halls.

Meanwhile, as the bargaining process continues, students are expressing their concerns toward the lack of student-regent contact, and their inaccessibility for students to engage with.

Aiden Arasasingham, a second-year UCLA student who traveled 400 miles to speak at the Regents meeting, called attention to the great lengths students must make to speak with those who govern their universities.

“For the vast majority of students and workers, this is wildly inaccessible,” Arasasingham said. “We as students want to meet with you, we want to engage with you, and to be quite honest, we want a face to put to the name of the checks that we write every quarter for tuition and services.”

Regents meetings take place on weekdays, commonly at UCSF Mission Bay. Often this means that a student who wishes to voice their concerns before the regents must miss an entire day of classes or work for travel.

AFSCME student internErick Ceballos-Vazquez wants more student involvement and transparency in the regents’ process of handling the list of demands.

“The regents are inaccessible and they’re these very rich, mysterious figures that a lot of student don’t know,” Ceballos said. “In democratic traditions, they should want to hear us out.”