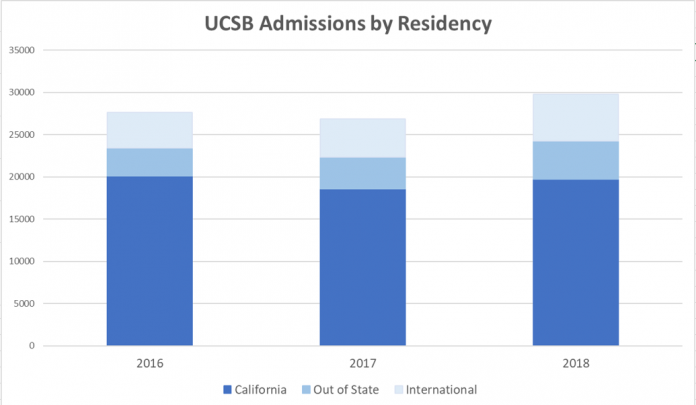 The University of California admissions remain competitive as recent data reveals a decrease in acceptance rates across the UC system. UCSB’s acceptance rate decreased by 0.4 percent despite accepting 2,903 more freshmen in Fall 2018 than in 2017.

According to the UC Fall 2018 Undergraduate Admissions Report, the number of people who applied to UCSB surged by 12.5 percent, whereas the number of admitted freshmen only rose by 10.8 percent, making an overall acceptance rate of 32.4 percent.

Although UCSB accepted more applicants this year, that does not necessarily mean that the accepted students will be enrolling in Fall 2018.

According to the University of California website, the yield rate is the percentage of admitted students who choose to enroll at a UC campus. Historically, schools that have traditionally high acceptance rates — such as UC Santa Barbara, UC Merced, and UC Riverside — have lower yield rates than schools with low acceptance rates — such as UC Los Angeles and UC Berkeley.

The audit alleged that out-of-state applicants benefited from lower admissions requirements, which was detrimental to California residents who wanted to attend the UC of their choice.

“It is important to note that nonresident students accept offers of admission at a lower rate than California students,” said Danielle Smith, spokesperson of the UC Office of the President Media Relations in an interview with The Bottom Line.

According to the Fact Sheet for Fall 2018 Admissions, “UC expects to increase total 2018-19 California resident enrollment by 3,000.”

“With the benefit of a UC education, these accomplished young people from different backgrounds, with diverse beliefs and aspirations, will make California and the world a better place. We look forward to having them at the university,” said UC President Janet Napolitano in a press release on July 11, 2018.