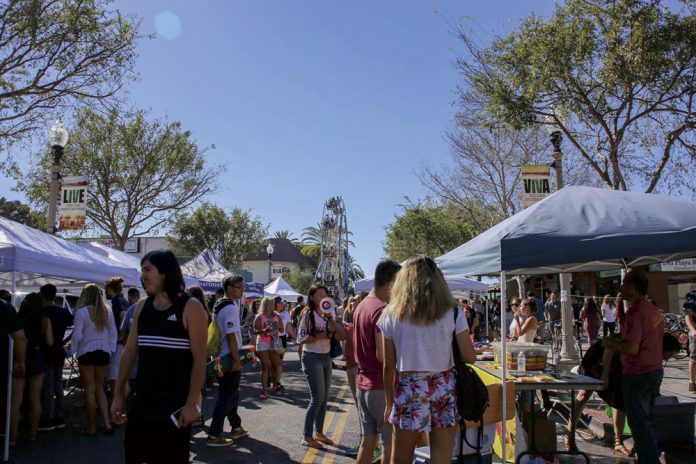 As part of the I.V. Open Lab’s project to make Isla Vista a more family-friendly neighborhood, the final I.V. First Friday event of the school year was held last week at People’s Park.

First Friday — held on the first Friday of every month — is a free event organized by I.V. Open Lab, a class at UCSB designed to increase awareness of I.V. as a family community instead of the stereotypical “party town.” The goal of the project, according to the Open Lab website, is “to explore where and how public, late-night entertainment could be effective in creating a more safe and engaging evening experience for the entire I.V. community.”

The event has gained steam in the four years since it was originally implemented, and has been sponsored at times by on-campus groups such as the UCSB Department of Recreation, the Isla Vista Excursion Club, and the Womxn’s Commission.

The overall project is an impressive attempt at bringing a greater sense of solidarity to Isla Vista, but the event held on June 1 demonstrates that it’s clear there is a lot more work needed to advertise the event and cater to college students.

The first thing that I noticed upon approaching the event was how dark it seemed. People’s Park is a grassy stretch of space nestled between Embarcadero Hall and the Isla Vista Community Center, opposite from Isla Vista Theater. The park has no natural lighting in place, so it was rather difficult to see what was going on in the park.

As I drew closer, however, my heart fell as I realized how sparsely populated the area was. I went to the event at 9:45 p.m., nearing the halfway point in the event’s timeline. Despite this, there were only around 15 people scattered throughout the park, only fleetingly illuminated by the rapidly flashing neon lights attached to the DJ booth.

This was especially jarring considering that there were many groups of people wandering around other parts of Isla Vista, dressed up and ready to dance away the impending fear of finals. Most people walked right past the park, unknowing or uncaring that there was an event taking place before their very eyes.

Funny enough, as I surveyed the park, I realized that the event setup itself was impressive: Three DJs (DJ BJ, DJ Josh A, and DJ Dom) occupied the DJ booth, and food trucks from places like Dave’s Dogs and Kona Ice lined the curb that faces Embarcadero Hall. Flyers announced that proceeds from all food sales would be donated to the A.S. Food Bank.

The venue was too dark and spread out to facilitate much interaction among the 15 or so people in the park, but from the looks of it, a decent portion of them seemed to be international students, who understandably might not have the same opportunities that in-state students have to interact with the student body population as a whole.

First Friday is a wonderful opportunity to foster a sense of community not only amongst the residents of I.V., but also amongst the UCSB community as a whole. However, judging from my personal experience with First Fridays, there seems to be one major change that could increase attendance and enhance enjoyment.

I think that a large reason why the First Friday event I attended was so sparsely populated was that there was no university-affiliated sponsor for this particular event. Without a “theme” for the night, like Health & Wellness or live music and comedy, it is harder for events like First Friday to compete with preexisting Friday night plans. It’s only when First Fridays try to set themselves apart from the norm that they’re able to garner a substantial amount of interest.

The idea of First Friday is admirable because it gives students a safe, sober alternative to the usual Friday night ragers, and it also gives marginalized community members like international students the chance to socialize in a welcoming, open environment.

However, the implementation of First Fridays leaves something to be desired. In order to attract a more significant portion of the student body, I would recommend trying something that would offer students a new and different alternative to the usual Friday night scene in Isla Vista, instead of trying to imitate the experience.