The 15th annual Deltopia was in full swing as huge crowds of partygoers swarmed the streets of Del Playa on Saturday. Thousands of partygoers walked up and down Del Playa; some tried to crash parties while others were there just to observe the spectacle.

Twenty-five people were arrested during Deltopia, which was less than previous years. However, the height of attendance and the number of injuries were higher than the previous years, with 10,000 attendees and 25 injuries. According to a Santa Barbara County Sheriff’s Office news release, 2014 remains the year with the highest number of attendance and arrests. The news release also stated that all 25 of the medical transports were due to alcohol and/or drug consumption.

Deltopia 2018 by the Numbers
Infogram

Infogram
“I went both years and I think that it wasn’t necessarily wild either years, but I did notice a lot of out of towners this year compared to last,” said Rebecca Mazouz, a second year global studies major.

In an effort to keep Deltopia safe, UCSB has continued to implement a variety of parking and traffic restrictions. Overnight and visitor parking were restricted over the weekend of Deltopia to protect the campus from outside traffic, while the UCSB residence halls also maintained a strict no-guest policy.

“I want to see what Deltopia is like because I wasn’t here last year and I don’t want outsiders to ruin it,” said Joe Yuke, a second year economics major.

In addition, the county festival music ordinance went into effect on April 5; this restricted loud music during the hours of 6 p.m. to 7 a.m. in an effort to discourage partying at night.

“The crowds dwindled after the Outdoor Festival Ordinance went into effect at 6 p.m. and then dissipated when thousands of students left Isla Vista to attend a UCSB sponsored concert at the Thunderdome,” according to a Santa Barbara County Sheriff’s Office news release.

Associated Students Program Board hosted its annual “The Warm Up” event at the Thunderdome in a continued effort to draw crowds away from partying at night on Del Playa.

“I have the utmost respect for the police force out here. The music restrictions and noise curfew however is what leads to issues in my opinion. When you have thousands of college students drunk out of their minds and you decide to end their house parties at the peak of degeneracy, you get mobs in the street. You need to let them party it out,” said Kevin Garrett, a fourth year religious studies major. 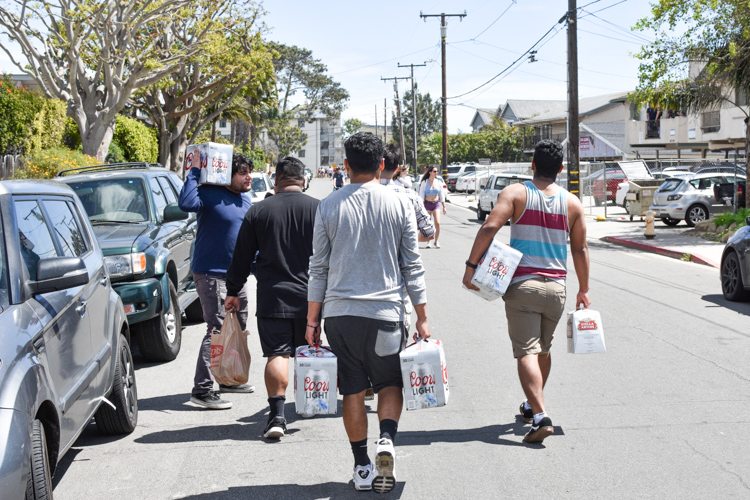 Local law enforcement as well as Community Service Officers (CSO) and the Medical Reserve Corps were mainly stationed around I.V. Theater, offering emergency services and direct aid to partygoers. There were multiple ID checkpoints on roads leading directly to Del Playa, and a fleet of police vehicles were parked near the Isla Vista Foot Patrol Station.

The news release also cited two instances where officers confiscated handguns. Briton Barge, a 23-year-old of Isla Vista brandished his .40 caliber pistol as he was searching for his property. Deputies arrested him four hours later without incident. Tristan Gilford, a 24-year-old of Santa Maria, was stopped in traffic due to faulty lighting equipment on his car, and deputies found a concealed .25 caliber pistol. Gilford was arrested for multiple violations.

“It was a little busier this year, but I have not seen much happening around this area. Del Playa is where most things are happening,” said Lieutenant Ed Olsen of the Santa Barbara Police Department, who was stationed at I.V. Theater.

“We have gotten a fair number of lacerations, falling, and cuts, pretty much everything is related to alcohol. People are falling off their bikes and hitting their heads,” said Patricia Burkard, a registered nurse.

There were also a number of services directly stationed on Del Playa to ensure a safe environment for partygoers. Volunteers set up tables near Camino Del Sur, handing out water to drunk college students. Another volunteer group held out a big sign that said, “Free Blessings, offering prayers and comforts to passerby.” In addition, law enforcement officials patrolled in groups of three along the street, assisting or arresting partygoers.

Despite major restrictions and the heavy presence of law enforcement, Deltopia 2018 still managed to create a wild and fun atmosphere. Music blasted from houses and from people’s phones as they walked DP. Others danced in front of law enforcement officials. In fact, some bold pedestrians even managed to score a selfie or two with their local police officers.

There were also a few individuals feeding the drunk population of Deltopia. One resident grilled hamburgers in front of his house and gave them away to hungry people. Other individuals sold milk and cookies to the crowd.

A number of apartments implemented fencing directly on the street, blocking the crowd from destroying property and trespassing. Party crashers were not welcome which left a massive amount of people to wander aimlessly along the street.

One startling effect of the heavy foot traffic was increased sales for I.V.’s local restaurants. Local restaurants such as Rosarito and Super Cucas, which are traditionally less popular than Woodstock’s, were packed with long lines of hungry customers all Saturday. Local groceries and liquor stores also saw increased patronage as residents bought alcohol to fuel parties.

Deltopia wasn’t for all, however. For some, other responsibilities got in the way of enjoying Isla Vista’s largest party weekend.

“I have to go to work so I can’t get too wasted in the morning. When my shift is over, the party is already dead because of the music ordinance,” said Vuong Ly, a third year history major who could not attend Deltopia due to work.

On Sunday at 11 a.m., many residents came out to volunteer at I.V. Recreation and Park District’s weekly Adopt-a-Block service. Volunteers picked up litter left behind by the partygoers of Deltopia.

“I don’t want it to be a huge rave,” said Vince Sackey, a second year film and media studies major. All in all, continued cooperation between the university, local law enforcement, and the students helped keep Deltopia safe and local for Isla Vista and its residents.