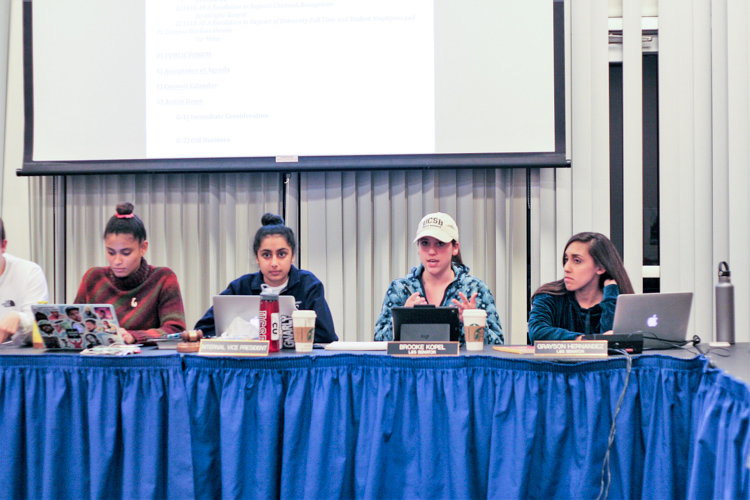 Associated Students Senate unanimously passed a resolution condemning anti-Semitism and hate speech on Wednesday. The resolution, which L&S Senator Brooke Kopel and Off Campus Senator Anthony Pimentel authored, affirms that Senate “will strive to be allies of the Jewish community,” and members of other identities including religion, race, ethnicity, gender, sexual orientation, ability, citizenship status, and class.

“Today is Yom HaShoah,” Kopel said. “Yom HaShoah is Holocaust Remembrance Day, so I decided, along with Senator Pimentel and some members of the Jewish community, to write a resolution condemning anti-Semitism and hate speech against all marginalized communities.”

The resolution states that Senate “will respect the right of all students to freedom [of] speech, while exercising its own First Amendment rights to condemn hate speech whenever it occurs on campus,” in which it defines anti-Semitism as “the bigoted targeting of a historically oppressed minority.”

“The problem with anti-semitism is that is so implicit all the time,” Kopel explained. “It’s not like an exclusive derogatory word. It’s always implied statements, and that’s so hard to point out, but is so troublesome for the Jewish community because we always feel like we have to step up an extra level to justify ourselves, and justify the hatred that we are experiencing.”

“It’s not just the Jewish community,” Pimentel said. “For example I am not Jewish, however, I come from a Hispanic background and I am from a marginalized community as well, so I could sympathize with what my allies in the Jewish community have witnessed here at UCSB, and beyond UCSB. This resolution is something that not only condemns anti-Semitism, but also hate speech.”

The resolution cites several instances of “anti-Semitism and hate” within the University of California, such as flyers that were found on UCSB’s campus in October of 2014. These flyers stated that “9/11 was Mossad,” Israel’s intelligence agency. There was also a cartoon that was perceived as anti-Semitic; it was published in the Daily Californian in October of 2017.

Another instance of perceived anti-Semitism occurred on Feb. 25, when the word “Jew” was found spray painted on a dumpster on Del Playa. Photos of the vandalism circulated, and several members of the Jewish community voiced their concerns at Senate on Feb. 28.

“It makes Jewish people feel like they’re being compared to trash,” said Michelle May, a fourth year biology major and student sponsor of the resolution, during public forum on Feb. 28.

Mooraj claimed that the resolution does not address anti-Semitism in a meaningful way; it “serves almost as a way to erase the need to criticize and organize Israeli violations of Palestinian human rights, including those of African and Asian immigrants and laborers, including those of Jewish heritage.”

“If the university really wants to address anti-Semitism, it has to take a non-reactionary stance, and be truly reflective of the manner in which our particular position can fuel issues of anti-Semitism, and the problems that arise from it,” Mooraj said. “Especially when a lot of this type of legislation is to attack organizers around Palestinian human rights.”

Ray Alonso, a first year political science and history of public policy double major, addressed the potential backlash of Palestinian minority groups. He believes the resolution was not trying to marginalize any individuals and that it had positive intentions.

“I think we can all agree that defeating anti-Semitism is a generally good thing,” Alonso said. “I think it should be considered that passing this legislation would not be taking a direct statement to hurt the Palestinian groups … When we pass something like this, we’re doing nothing but creating the overall consensus on campus that anti-Semitism is something that should not be allowed under any circumstances.”

“I think this resolution is necessary, not only for Jewish students on campus, but prospective students coming onto campus that want to feel safe and that want to know there are student leaders that are going to stand up for them,” said Noah Fleishman, a third year public policy major. “I think that’s really important, and I would love the continued commitment of the Senate in making sure that students like myself continue to feel comfortable on this campus.”