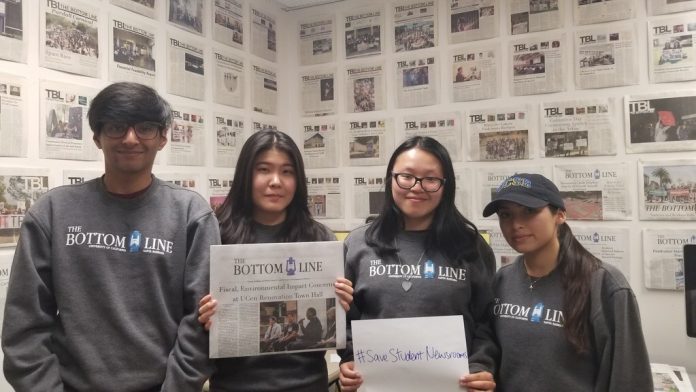 Unfortunately, dark times for student media around the country drove The Bottom Line to publish its second editorial in two weeks; the first two it has published since 2014. Although this editorial will conclude with a thank you note to the UCSB community from TBL’s editorial board, it is written specifically in solidarity with Southern Methodist University’s soon-to-no-longer-be student-run newspaper, The Daily Campus.

Financial concerns forced The Daily Campus under the wing of the school’s journalism department, threatening the paper’s editorial independence with administrative oversight. We are writing now as part of a national response organized by #SaveStudentNewsrooms, a campaign that student-run newspaper the Independent Florida Alligator started to encourage student newspapers around the country to write in solidarity with The Daily Campus.

In an editorial published on April 4, The Daily Campus’s editorial board held no punches laying blame for the newspaper’s financial troubles: “the adults charged with keeping us afloat let us down.” They eloquently argue this point; The Daily Campus, and the school’s yearbook, has been funded for almost 90 years by a student-led independent media company. The campaign was initially created in response to administrative interference with the newspaper’s content.

Despite many editors at The Daily Campus expressing “concerns with Student Media Company’s finances for years,” the (admittedly inexplicably) adult-only board of the independent media company voted in May to dissolve the organization. It was dissolved due to its lack of funds, according to Daily Campus coverage of the organization’s dissolution.

The Daily Campus is not alone in financial troubles. Kennesaw State University’s The Sentinel wrote that their entire design staff was laid off in 2017 due to budget constraints in their #SaveStudentNewsrooms editorial; other student papers frequently discuss chronic staffing shortages and underfunding.

UCSB’s student-led journalism organizations are fortunately safer from financial abuses and ensuing administrative overreach because UCSB’s student community reliably supports these organizations. Almost 12 years ago, students created The Bottom Line when they realized that the UCSB and Isla Vista communities are too large and diverse to be covered by one student paper (although The Nexus deserves credit for doing a consistently fantastic job covering all that they can).

The student body voted to fund TBL’s first lock-in fee in 2012 which ensured the paper’s financial security and reaffirmed UCSB students’ commitment to independent student media. Now, both papers consistently contribute both hard-hitting news necessary to inform the community and a variety of in-depth culture, science, and opinion coverage that illustrate what students do, think, and feel.

Being an editorially independent student newspaper means that we are not beholden to advertisers, sponsors, or administrative oversight. Our vested interest is ensuring that our readers — particularly the students who fund this newspaper — are fully informed about local and national issues pertaining to them.

We know that, most importantly, our readers rely on our coverage to inform them on administration and A.S. leadership. At previous Associated Students Senate meetings over the last several years, public forum speakers and politicians have referenced our coverage in discussing hot-button issues. Most recently, Associated Students senators referenced our editorial arguing against the UCen renovation as they questioned the A.S. president at last week’s senate meeting. Their reference is a clear indicator that our information provides high value to students.

Such value comes at a low cost: for the price of just two cups of coffee — $1.69 a quarter for The Bottom Line and $3.10 a quarter for the Daily Nexus — students ensure the local area remains well-informed by vibrant print and online journalism. Not only students, but also university employees and I.V. community members rely on UCSB’s unique media environment to get unbiased information about Isla Vista and UCSB’s campus.

Student newsrooms are part of the line of defense against ignorance on college campuses. While professors and TAs are there to supplement students’ knowledge on academic topics, reporters in our newsroom provide facts about topics too localized to matter to academia or the national media.

When you support student newsrooms with your student fees, you are supporting the efforts of dozens of amateur journalists on this campus to ensure that students understand how their university is doing and have a say in determining its future. A healthy media environment holds the university administration accountable for its power, documents historical moments, and provides an immersive training experience for future journalists.

UCSB is not alone or unique in our experiences; student journalism is an invaluable resource for hundreds of college campuses around the country. Thank you for your continued support as we cover UCSB’s growing population; reliably funded journalism is more important now than ever.

What the Walter Scott Case Says About Police Brutality