When University of California President Janet Napolitano announced on Oct. 26 the opening of The National Center for Free Speech and Civic Engagement at the UC Washington Center in Washington, D.C., the message was simple — that the United States First Amendment is of “critical importance to American democracy.”

Over the past couple of years at UC Santa Barbara, the subject has been of huge significance to student life, extending all the way to the administration.

“Cognizant of both the enduring constitutional principles of free speech and the nature of our changing times,” Napolitano wrote in an op-ed published in SFGate, “the center and its roster of fellows will focus on addressing whether and how students’ relationship to the First Amendment has fundamentally shifted from the 1960s — and how to restore trust in the value and importance of free speech among students and society at large.”

It has been a turbulent time for free speech on campuses, the UC Office of the President said in a press release.

“The issue of free speech has roiled colleges and universities nationwide, including UC campuses, with incidents of violence, intolerance, and attempted speech suppression,” the release reads.

In response, Napolitano said, the center will establish a “concerted educational, research and advocacy effort” aimed toward protecting First Amendment rights on campus.

The center will also establish a fellowship program “that will draw from leading public policy thinkers, legal scholars, social scientists, journalists, and others,” the release reads. Fellows involved in the program will investigate college students’ views on free speech.

“It’s a mystery box as of now,” Dominick DiCesare, former President of UCSB Young Americans for Liberty and fourth year computer science major, told The Bottom Line in a written message. The center may be a productive step toward affirming free speech on campuses nationwide, he said, or it could lead to an epidemic of misidentifying portions of language as hate speech.

“We shouldn’t need something like this: it’s written into the Constitution that our rights to freedom of speech shall not be infringed,” DiCesare said. If the center doesn’t actually take steps to protect speech at universities, he said, it will amount to nothing more than an “empty gesture from aging politicians.”

DiCesare’s skepticism comes in during a relatively stable era of free speech angst at UCSB. But all throughout 2016, students and administrators struggled to find a line to draw in the sand.

UCSB alum Jason Garshfield, a free speech activist, said he is disappointed the UC took so long, citing violent protests “more characteristic of third-world nations than of the United States.”

In January, a planned speech by ultra-conservative personality Milo Yiannopoulos at UC Berkeley was canceled after a protest of the event turned violent.

“If they had listened to the voices, myself included, which were warning about the campus free speech problem two or three years ago, this might not have been necessary,” Garshfield said in a written message to The Bottom Line.

While Garshfield was still a student in Jan. 2016, he sponsored an Associated Students Senate resolution to affirm A.S.’s commitment to protecting free speech on campuses. The Senate passed the resolution unanimously.

But the matter would not quickly go away. In April of that year, UCSB students awoke one morning to find their campus covered in chalk.

The statements scrawled on the floor and in front of lecture halls included: “Black Lies Matter;” “sodomy = AIDS, repent;” “deport them all, build a wall, but save the tacos.”

The reaction was swift — just days later, students incorporated the overwhelming opposition to the chalkings into a second incarnation of the Million Student March. Meanwhile, both Chancellor Henry T. Yang and Vice Chancellor of Student Affairs Margaret Klawunn would speak publicly, with the latter strongly condemning the messages as sexist, homophobic, racist, and transphobic.

The source of the messages is still not publicly known, but in November, tensions over free speech came to a much more visible head when student organization College Republicans asked the A.S. Finance and Business Committee to provide the club $5,000 to bring conservative speaker Ben Shapiro to campus. The committee granted the request, and the A.S. Senate backed the decision, but not before groups of students urged the Senate to reconsider, citing concerns for the mental, emotional, and physical safety of Black students on campus.

The main tipping point for their concerns was Shapiro’s repertoire of controversial conservative views and the original title for the event — “Prejudice, Lies and Divided People: The Legacy of #BlackLivesMatter.”

A year later, the rubble at UCSB has mostly settled. With the building of the new free speech center, the UC has issued a stance on the matter of the First Amendment.

Napolitano wrote in the op-ed, “The time has come to explore in a thoughtful, deliberative way the state of free speech at our nation’s colleges and universities, students’ once and future relationship with the First Amendment, and what tomorrow holds for engaging people in our democracy.” 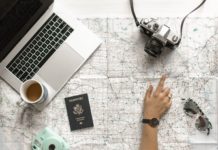