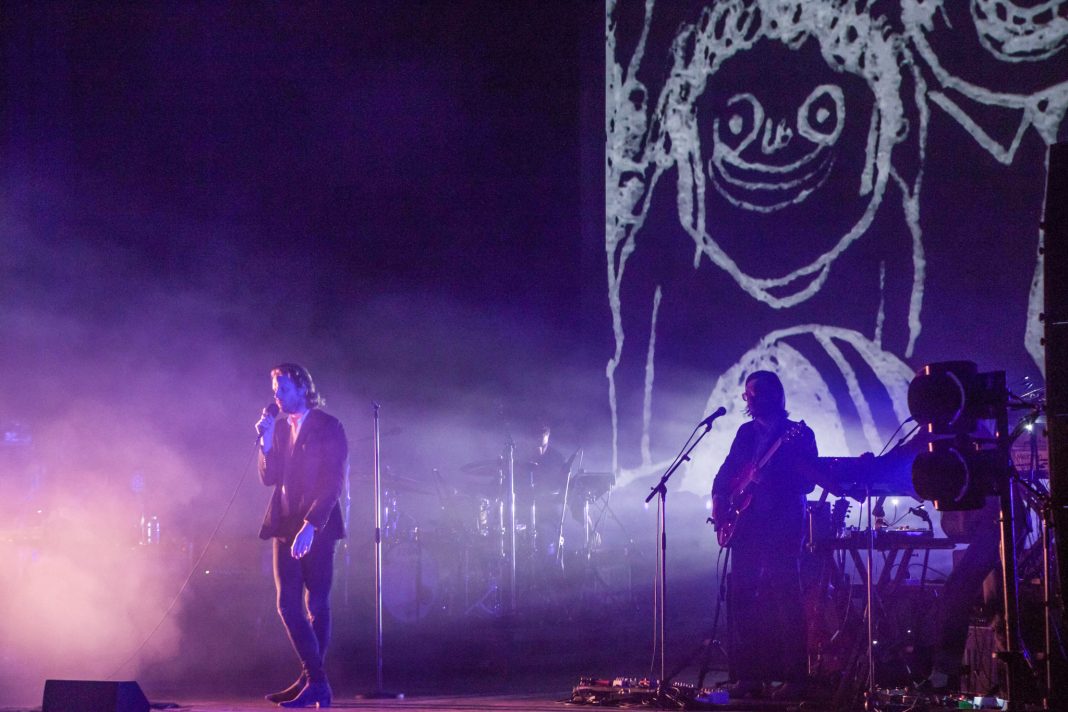 From start to finish, Father John Misty’s performance was both relaxed and intense; lighthearted and heart-wrenching.

Onstage, there was a keyboard covered by a picture of the earth, with two small candelabras on either side of the stage, doused in violet lighting. In the background was a large circle that would later be transformed into a moon.

Josh Tillman, who performs under the moniker Father John Misty, launched his solo career in 2006 before shifting focus to join Fleet Foxes in 2008. In 2011, Tillman left Fleet Foxes and became Father John Misty. Since going solo, he has released the disco-esque Fear Fun and the romantic yet disillusioned I Love You, Honeybear, which made up a decent amount of his Arlington setlist.

Natalie Mering, also known as Weyes Blood, opened for Misty. With witty jokes, an ethereal voice (think Regina Spector meets Florence Welch), and a rendition of George Harrison’s “Run of the Mill” dedicated to her mom, Weyes Blood got the crowd ready for a night of thought-provoking FJ Misty bangers.

Misty and his band sauntered out a little after 9, greeted with hoots and hollers from fans ranging from 20-year-olds to middle-aged couples. Misty performed many of his newest somber and cynical songs, such as “Pure Comedy,” “Total Entertainment Forever,” “Things It Would Have Been Helpful to Know Before the Revolution,” and “Ballad of the Dying Man.”

As the lights turned spring green, Misty transitioned into the more upbeat, jaunty “Nancy From Now On.” The audience seemed torn between remaining in their seats and standing to groove to the swelling piano and twinkling percussion. Misty instantly sensed their confusion and broke down the barrier in a somewhat annoyed but encouraging tone, suggesting to the crowd that “you can stand up.”

From that moment on, hardly a single person sat down again.

Up next were “Chateau Lobby #4 in C for Two Virgins” and “Strange Encounter” – both of which had the crowd singing at full volume and enthusiastically clapping throughout.

Once “Nothing Good Ever Happens at the Goddamn Thirsty Crow” began playing, the show shifted into overdrive. Aggressive red lighting backed lyrics like “Why the long face, jerkoff?,” set to twanging guitar with crescendoing drums. Misty passionately threw his guitar to a stagehand, swung the microphone like a lasso, crumbled to his knees, and arched up as if being exorcised while belting his heart out.

Several more “Misty-cal” moments happened throughout the evening. During his transition out of “Sally Hatchet,” a man sitting in the balcony shouted out “Josh” (Misty’s birth name) to which Misty dryly responded: “Yes, sir? Do you have a question? I’m here at your disposal … You sound cute.”

Following that interaction, a video played on the backdrop as Misty began singing “The Night Josh Tillman Came to Our Apt.”  In the video, Misty proceeded to flirt, do cocaine, swim fully clothed, serenade, and kiss a mirror image of himself. This garnered much enthusiasm from the audience. Then again, there wasn’t much Misty did that didn’t elicit that kind of response.

The word prophet is often defined as one gifted with more than ordinary spiritual and moral insight; essentially, it is an inspired poet. Eyes filled with burning passion, standing before a sea of inspired spectators hanging onto his every word, belting out lyrics with an almost religious level of conviction — Father John Misty seems to be the embodiment of a prophet.

Visionary Film “Get Out” Spins a Tale of Thought-Provoking, Racially Motivated...