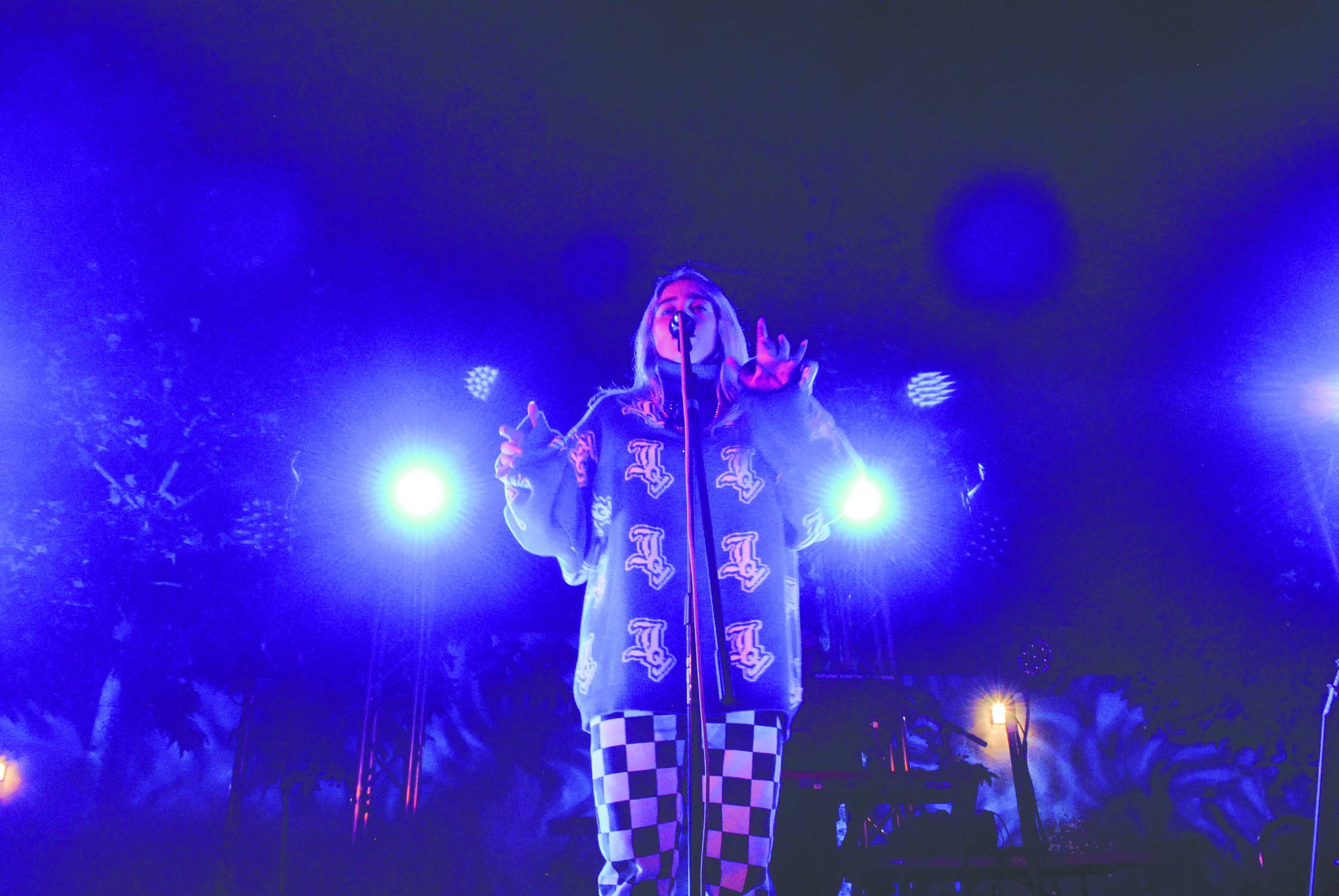 In the arcade corner of the park, I.V. residents played retro classics like Pac-Man and Space Invaders. Others gathered to challenge their friends to a game of air hockey or foosball. Although the sun had set, colorful lights illuminated the games and made the gathered players glow.

By around 8:45 p.m., THUTMOSE! took the stage and immediately electrified the crowd with his fast-paced rap. His irresistible rhythm and ingenious lyrics brought an exciting and unique sound to People’s Park. THUTMOSE!’s energy quickly drew more people into the park to watch him perform and dance to the beat. He then took a dreamy, melodic turn with “American Beauty,” a reflection on intimacy and distance.

“Summer’s Gone” was especially relatable to attendees, and the crowd began swaying to the wistful love song. His set directly transitioned into the beat of Kendrick Lamar’s “HUMBLE.,” and jumped into a rapid freestyle which heightened the energy in the park.

Later in the evening, headliner Billie Eilish captivated the audience with her soft electro-pop vocals. A Los Angeles native, Eilish began singing at a young age and recorded her hit single “Ocean Eyes” at only 13. Now only two years older, Eilish proved that she can both mesmerize and charm a large crowd. “Billie has been named the Apple Music Up Next artist of the month and has been featured on blogs and playlists galore,” said Justin Taing, AS Programming Board Cultural and Arts Coordinator, in an interview with The Bottom Line.

Similar to other pop powerhouses such as Lana Del Rey or Lorde, Eilish combined melodic vocals with spacy electronic beats that turned People’s Park into a dance floor. She began with a fast-paced song that displayed the depth of her dreamy voice and drew the crowd closer. Next, she transitioned into her “watch”, an upbeat tune with lyrics that passionately threaten the listener with, “I’ll watch your car burn with the fire you started in me.” Although she is young, Eilish is not a force to be messed with for sure.

As the night continued, Eilish slowed down the rhythm of the concert with a ukulele cover of Drake’s “Hotline Bling” that revealed how pure her voice is and gave the venue a magical, intimate quality. Her cover smoothly transitioned into the sleepy “party favor,” which features melancholy vocals that sarcastically wish an ex-significant other happy birthday.

However, the concert was not entirely smooth sailing because there appeared to be a few technical difficulties. During the pauses, Eilish attempted to talk to the crowd but only made a few awkward comments. Her remarks on stage reveal that she has yet to reach her full maturity as a performer.

Many of the technical glitches occurred when Eilish’s brother accompanied her on stage to showcase his own vocals. However, his additional energy and singing made his sister’s set dynamic and engaging. The duo also had a short dance choreographed during an instrumental break. She ended the night with her popular song “Ocean Eyes,” as well as a new single, “bellyache,” that concluded with an energizing electronic beat drop that ignited the crowd.

AS Program Board hosted an exciting night at People’s Park that gave residents of Isla Vista an alternative to the hectic party scene. With delicious food, fun games, and excellent music, Isla Vista First Friday allowed residents to come together in celebration of community and good times.