Tickets going for over $50 on Free & For Sale. Lines wrapping around the ticket offices on campus. The social media freak-outs when singer-songwriter Khalid was slated to appear on campus Friday, Apr. 28.

It was slated to be one of Associated Students Program Board’s usual Hub shows, according to a representative from ASPB. The show comes just ahead of Extravaganza, the annual campus music festival happening in less than a month.

However, things took a literal turn for the worst on Friday night, when the man himself tweeted that he’d made a mistake and gone south toward the University of California, San Diego, instead of UC Santa Barbara. Khalid had put the wrong address in his navigation system. 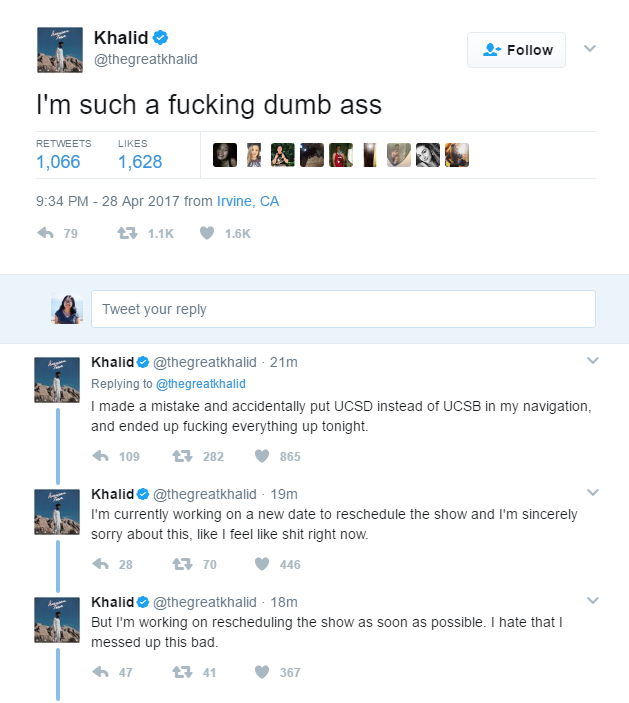 “I’m currently working on a new date to reschedule the show and I’m sincerely sorry about this, like I feel like shit right now,” Khalid tweeted.

“Unfortunately, due to unforeseen circumstances we had to cancel the show,” the entity wrote. “We are working with the artist to reschedule so keep an eye on our Facebook page but if we are unable to reschedule all tickets will be refunded.”

Some supporters outside the Hub screamed in anguish, posting on social media that ASPB “better honor my ticket for the new date” and wondering why he hadn’t been sent the correct address earlier.

In a later statement, ASPB announced that attendees should hold onto their tickets and reuse them if Khalid’s show could be rescheduled for a later date.

When the artist was first announced weeks ago, tickets sold out almost immediately online, with few students able to purchase them in person. Some students even received emails and full refunds from the A.S. Ticket Office stating that “some sales for the Khalid concert were inaccurately confirmed.” The problem has since been resolved.

Over the last two weeks, numerous students created posts on Free & For Sale to resell tickets at a higher cost. Some who’d taken note of the ticket resales implored fellow students to refund anyone who bought the ticket secondhand.

Although many fans were upset that Khalid didn’t show up for his set, supporters on Facebook and Twitter tried to comfort him.

“Hey, look it’s okay!,” wrote Twitter user @drunkenpastxls. “You’re only human and you’re doing the best you can. It was only a mistake. Just one bad moment. Love u [sic] pal.”

“No worries bro, on the bright side I made some new friends waiting in line,” second year psychology and sociology double major Andres Diaz tweeted. “Hope to see one of your concerts some day.”

Apr. 29, 12:17 a.m.: This article has been updated with additional information from ASPB.