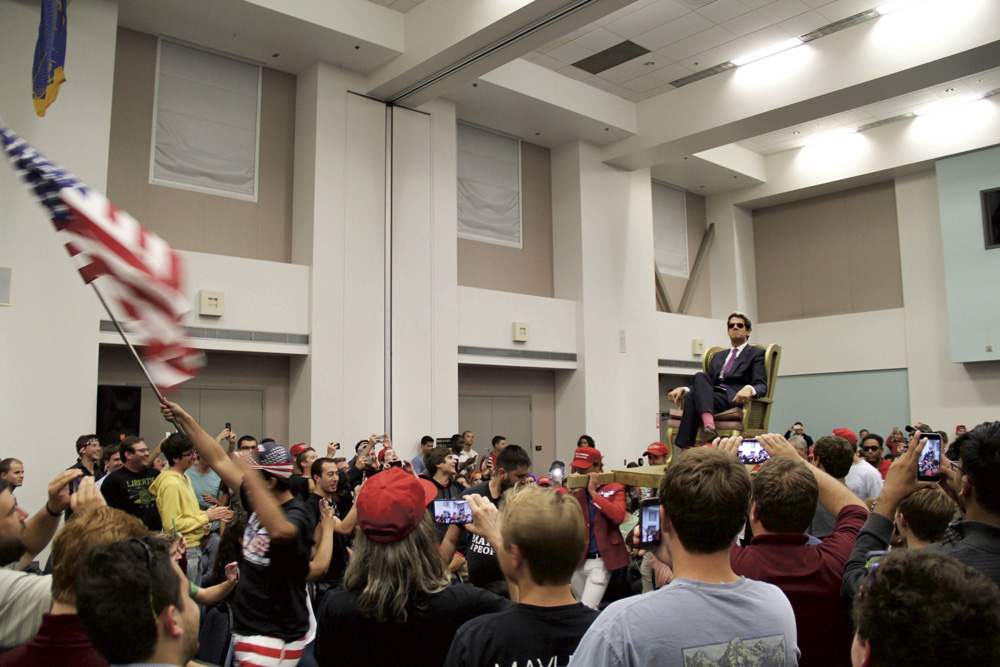 UPDATE Jan 11, 12:50 p.m.: College Republicans president Andrew Gates has informed The Bottom Line the event is now canceled, due to conflicts over scheduling.

UPDATE Jan. 10, 10:23 p.m.: College Republicans has informed The Bottom Line that the club may no longer bring Yiannopoulos to campus, pending a decision by the Office of Student Life. This article will be updated as we receive more information.

ORIGINAL published Jan. 10, 10:30 a.m.:
Controversial right-wing journalist Milo Yiannopoulos will speak at the University of California, Santa Barbara for the second time in a year, UCSB College Republicans confirmed. The event, scheduled for Jan. 17 (according to Yiannopoulos’ official website), will mark a stop of Yiannopoulos’ ‘Dangerous Faggot’ tour, which first passed through the university last May.

The political commentator’s rise in popularity over the past year, combined with how political events have unfolded during that time, prompted College Republicans president Andrew Gates to bring Yiannopoulos back to the university.

“Last year’s event had one of the biggest turnouts of any speaking event on campus,” Gates, a third-year economics and accounting major, said in a written statement to The Bottom Line. “Many students clearly enjoy Milo’s message and style.”

Yiannopoulos has sparked controversies on a number of college campuses during his tour. His signature criticism of feminism, Islam, and political correctness has caused many to label his views as hate speech.

Nevertheless, the speaker has become a champion for young conservative thinkers, and received such a distinction last May, when he drew a filled-to-capacity audience at Corwin Pavilion at an event hosted by UCSB Young Americans for Liberty. The student group is unaffiliated with the latest planned visit, which will be hosted instead by College Republicans. Members of YAL carried in Yiannopoulos on a throne to begin last May’s event.

During his ensuing hour-long lecture, Yiannopoulos ripped into the rise of the so-called “social justice” movement on mostly left-leaning college campuses.

He described members of the movement as “fat” and “ugly”, and at one point doubted aloud the existence of lesbians, suggesting they are simply women who have not yet had much luck sexually with men.

He also openly questioned the validity of the popularized “1 in 4” statistic that describes the prevalence of rape on college campuses.

This year’s event will feature a more “formal, professional and educational” speech, said Gates in the statement. Though Yiannopoulos is known mostly for his comedy and theatrics, Gates said the new event will be more “unique.”

“I’ve listened to Milo elaborate upon controversial issues with a degree of eloquence and intelligence not often exhibited by most ‘provocateurs’ or public figures in general,” said Gates.

At last May’s event, Yiannopoulos himself professed to employing a less-than-academic approach in his usual speeches. When asked by a student why Yiannopoulos opted for jokes over “substantive” criticisms, the speaker responded, “if you want high-brow stuff, attend other lectures.”

According to Gates, College Republicans does not necessarily endorse every one of Yiannopoulos’ views but seeks to give platform to those who dissent from the “leftist majority” on university campuses.

“Milo is a smart, well-intentioned individual,” Gates said, “who has a distinct voice and offers many substantial commentaries on politics and culture, contrary to leftist dismissals of him as merely a bigoted person who only seeks to cause harm to others.”

Yiannopoulos officially serves as technology editor for Breitbart News, though in the past year the political commentator has expanded his brand into an assortment of media, including podcasts, viral internet content, and a planned autobiography, which was announced in December.

A heavily conservative, openly gay Donald Trump-supporter, Yiannopoulos’ rise to prominence has run alongside that of the “alt-right” political movement, which often pushes for white nationalist principles in United States politics.

The past year has also seen Yiannopoulos make headlines for other reasons. In July, Twitter issued a permanent ban of his account, after the speaker wrote multiple tweets mocking actress Leslie Jones.

The speaker also experienced resistance from students on a number of university campuses, including an incident last May at DePaul University where several students rushed onto the stage to grab microphones and interrupt the event.

In an interview with The Bottom Line after last May’s event at UCSB, Yiannopoulos praised the civility of the university’s crowd. He described the audience as “tremendous,” calling it “one of the best-behaved audiences in a while.”

The event had indeed drawn heavy criticism from students months before the lecture even took place, when a Facebook event for his visit popped up under the title “Feminism is Cancer.” During the actual event, which was so packed that a line of people were turned away at the door, no incident occurred.

Yiannopoulos’ overall message, as he said to The Bottom Line in May, is to “rethink” what’s already considered knowledge and be careful not to accept any limits on free speech.

“More speech, rather than less speech, is always the way to go,” Yiannopoulos said.

In November, the Associated Students Senate voted to fund a College Republicans’ event that will bring Ben Shapiro, former-Breitbart News columnist and colleague of Yiannopoulos’, to UCSB. The senate’s funding decision was controversial among students and many expressed discontent in the days after.

Gates said the Yiannopoulos event will not require A.S. funding for a speaking honorarium, though he will consider requesting funds to book hospitality for Yiannopoulos and provide security to the audience at the event.

Gates, who participated with members of YAL in carrying Yiannopoulos on a throne to begin the event last May, says there will be no such entrance this time around.

“We want to make this event more formal and professional,” Gates said, “although with Milo, there is almost always some level of flamboyant theatrics.”