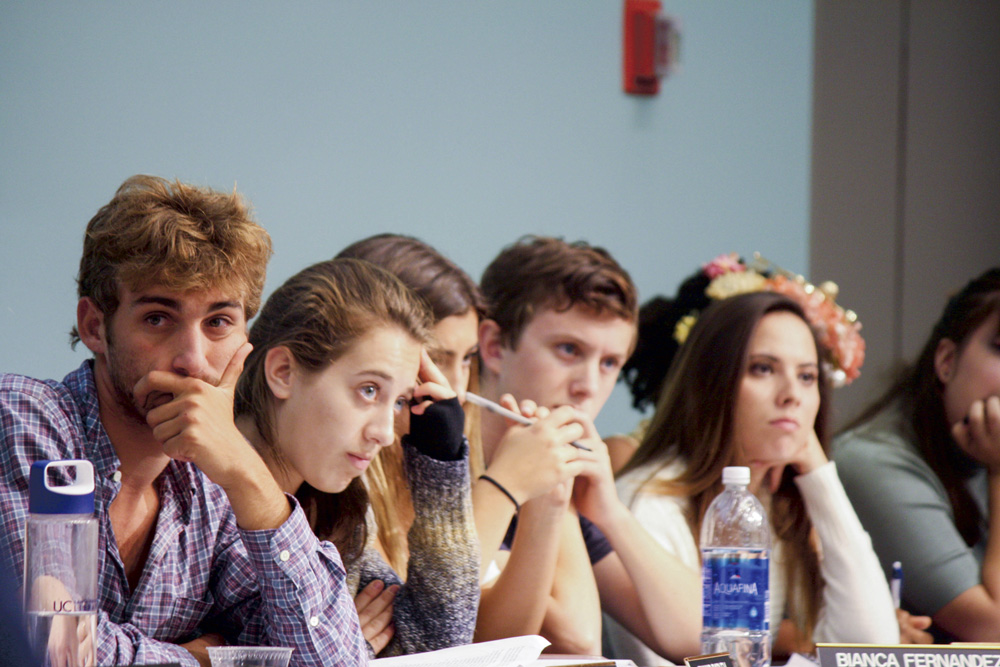 Corwin Pavilion filled for the second time in two weeks as students on both sides of the Ben Shapiro event reiterated their positions to Associated Students Senators at last Wednesday’s senate meeting.

Approximately 50 people of color and their allies returned to speak again at public forum to protest Senate’s decision to uphold Finance and Business Committee’s $5,000 funding for a talk by Shapiro, hosted by UCSB College Republicans and set to be held in early December. Speakers reiterated their mutual threat to identity and lack of safety felt by Shapiro’s controversial rhetoric.

“Of course this is affecting our mental health,” said second year political science major Kuvimbanashe Edwin Chikukwa, “but I’m tired of being told that I need to go to CAPS. This is a problem that needs to be addressed here, right now.”

In response to disgruntlement by both constituents and several senators over the prior week’s secret ballot decision, College of Letters and Science Senator Felipe Recinos Quant and Off-Campus Senator Cole Marting proposed a resolution to further transparency that would allow for a secret ballot only if recommended by an Associated Students Administrator to ensure senate’s safety. The resolution was sent to the internal affairs committee for further review.

Despite the enthusiastic turnout, senate agreed to table all three resolutions on the agenda, addressing the Ben Shapiro event until next week.

“I know a lot of senators last week spoke in opposition,” said On-Campus Senator Lesly Silva, who put forth all three of the resolutions. “However, due to the current political climate and the concerns for safety on students of this campus, I do not want to talk about this today.”

The resolutions included a formal declaration of opposition to Shapiro’s message, a repeal of the $5,000 funding given to UCSB College Republicans for the Shapiro event, and a recommendation to the Office of Student Life that they withhold approval of the Shapiro event. All three will be discussed at the senate meeting to be held on Wedneday, Nov. 16.

People of color and their allies were allowed to give input on a resolution in support of free speech, discussed later in the night. After taking suggestions from the crowd, senate approved amendments made by Off-Campus Senator Reilly Hobson to include the UC Regents Principles Against Intolerance as a requirement for free speech expressed on campus. Hobson cited Point A of the Principles Against Intolerance:

“The mission of the University is to promote discovery and create and disseminate knowledge, to expand opportunities for all, and to educate a civil populace and the next generation of leaders,” the statement reads. “The University therefore strives to foster an environment in which all are included, all are given an equal opportunity to learn and explore, in which differences as well as commonalities are celebrated, and in which dissenting viewpoints are not only tolerated but encouraged. Acts of hatred and other intolerant conduct, as well as acts of discrimination that demean our differences, are antithetical to the values of the University and serve to undermine its purpose.”

To open up the discussion to all groups interested in adding input, senate agreed to send the resolution to the external affairs committee for further review before further discussion. Chaired by On-Campus Senator Unique Vance, the committee met Monday in an open meeting for all students to review the resolution.