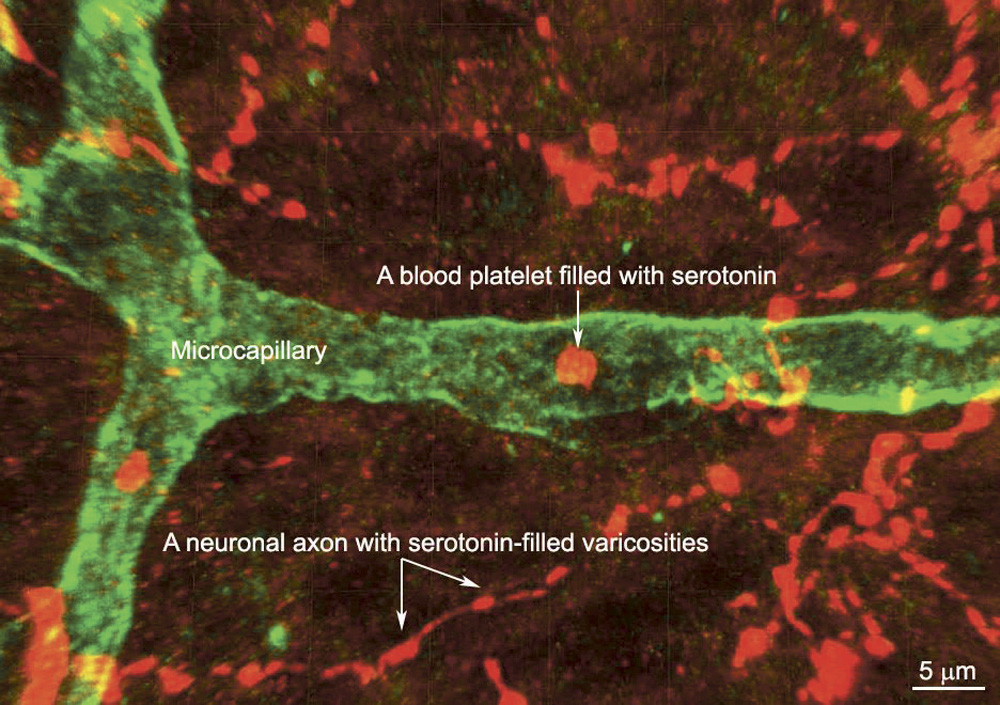 Imagine that you are holding a brain in your hands. If we removed all the brain cells we would be left with the capillaries that run throughout the brain. But even without those neurons and supporting glial cells, you would effectively still be holding an entire brain. Within the tangled entrails of this dense capillary labyrinth, University of California, Santa Barbara neuroscience professor Skirmantas Janusonis and his research lab seek to explore the relations of blood and brain.

Serotonin, or 5-HT (5-hydroxytryptamine), is primarily found in the central nervous system, the gastrointestinal tract, and blood platelets. The central serotonin system is comprised of serotonin fibers that project throughout the central nervous system. Each serotonin fiber consists of periodic bulges, known as varicosities, from which serotonin is assumed to be released and involved in chemical signaling within the brain contributing to mood, well-being, and even appetite.

“That [peripheral] serotonin has been studied extensively by non-neuroscientists in other systems like gut and heart physiology, but neuroscientists thus far have paid very little attention to it, because it is assumed that peripheral blood has no effect on brain function,” explains Janusonis.

The traditional assumption is that peripheral and central serotonin systems do not interact due to the highly selective blood-brain barrier that separates both systems. More specifically, blood platelets traveling through the dense capillary network in the brain can not escape or interact with neighboring serotonin fibers.

Off to one corner in the image lies a loose dot, much like a blood platelet in a capillary or a varicosity on a serotonin fiber. Perhaps it is just a loose varicosity attached to something unseen in the image, and can therefore go ignored.

But what if it is a blood platelet escaped from the brain’s microvasculature? For Janusonis, the implications of such an interaction have more than just clinical relevance for mental disorders associated with serotonin, like autism, but the potential to challenge traditional ways of thinking on the functional integrity of the blood-brain barrier as the interface between both serotonin systems.

Recent research has come out that questions the traditional integrity of the blood-brain barrier regarding blood platelets. While platelets are conventionally restricted to capillaries, under certain conditions it has been shown that they “can escape microvasculature, and not only that, but may potentially interact with cells in the brain.”

Some evidence regarding neuroinflammation hints at the possibility that blood platelets might escape capillaries and interact with affected neural and glial cells. Thus the notion of the blood-brain barrier as a massive fortress, Janusonis argues, may actually be a misconception, because “what we haven’t considered enough is that the brain is a highly dynamic entity.”

Instead, think of the barrier as immigration at an airport where everything gets verified for passage or prohibition based on a criterion that “is going to be affected by the current policies.” This criterion constitutes the wall’s dynamic nature, but without a fundamental understanding of how this dynamic entity operates, or as Janusonis put it, “how these policies are implemented at the level of the blood-brain barrier,” their effects may easily be missed. In the case of autism, it could be that the policies are incorrectly implemented and compromises the blood-brain barrier. While Janusonis does not claim this would explain all of it, studying the barrier’s mechanism “may be a very important component.”

Janusonis has spent nearly a decade researching serotonin and autism. The link between the two goes as far back as 1961, when the first publication came out identifying platelet hyperserotonemia, elevated serotonin levels in blood platelets, as a common characteristic amongst autistic individuals across the board. Despite being one of the most consistent biological findings in autism, having been replicated in numerous studies, the causal relationship between hyperserotonemia and autism continues to challenge scientists from a variety of disciplines.

“When you start solving a disorder like this you run the risk of finding nothing, because you don’t always know what to focus on,” explains Janusonis, highlighting the challenges researchers face in studying hyperserotonemia in autism nearly 55 years since its initial discovery.

Many researchers initially thought that altered gene expression of the SERT transporter could be implicated in autism and contribute to elevated serotonin levels in peripheral blood platelets. Janusonis recalls how this hypothesis seemed highly plausible as the same exact transporter is expressed in both blood platelets and serotonergic neurons in the brain.

Therefore, conditions in the brain leading to autism might also affect peripheral serotonin levels due to the simultaneously impacted SERT transporters. However, these studies proved inconclusive. “Well established groups including the Yale Child Studies Center, with whom I’ve collaborated, tried this, and nothing came out of it,” explains Janusonis.

Alternatively, while mouse models remain valuable in replicating and studying autism, they have also fallen under some criticism. Having worked as a comparative neuroanatomist with an assortment of intriguing species from rhesus monkeys to Chilean degus, Janusonis is very cautious about translating results from mouse models to humans. Expressing these concerns in his published research, he notes how “each individual species will have some idiosyncrasies as far as anatomy goes, and each species has its own ecological niche, its own social behavior” which can be very different compared to humans.

“We don’t behave like mice. Some mice just eat their young, I mean we don’t do that,” Janusonis said enthusiastically.

But Janusonis’s concerns with autistic mouse models arise from how they are genetically purified and interbred to maintain the standardization of genes. While some engineered strains exhibit behavioral characteristics associated with autism, such as reduced social interaction, the “normal” mouse behavior of “standard” mouse strains is rather arbitrary and may look quite strange from a wild mouse’s perspective.

Janusonis’s research emphasizes the relevance of using strains that satisfy both the behavioral and physiological components of autism, like hyperserotonemia. “We’re not saying you have to go by the blood levels, but pointing out the fact that [solely focusing on behavioral features] is shaky grounds to be on,” he said. “[These strains] depend on which mouse has normal social interactions when all of these mouse strains are artificial to begin with.”

With increasing attention on peripheral gut serotonin, a study resonating with some of Janusonis’s theories on peripheral serotonin’s involvement in autism was recently published by researchers that tried to associate gastrointestinal tract problems with elevated serotonin levels. It has been well known that autistic individuals tend to have digestive issues, but the causal relationship remains murky.

“It’s not clear if [digestive issues] are a side effect of all the other things happening in the lives of these individuals, or if it is actually biologically, at the molecular level, related to what we see cognitively,” Janusonis said.

Perhaps changes in the gut lead to the observed digestive issues, and as a result of the larger gut dysfunction, altered serotonin synthesis in the GI tract leads to platelet hyperserotonemia. Yet, again, no association between the two could be established.

“I kind of left the autism field per se because of that. My own view is that we need to take a step back instead of being laser beam fixated on the disorder itself,” describes Janusonis whose lab is currently focusing on studying the basic mechanisms of serotonin as “there are more fundamental questions that remain unanswered.”

“By building those tools based on my fundamental studies, I can produce very sharp questions,” Janusonis explained. “Suppose platelets do get out [of capillaries]. Then I can ask, can we estimate the permeability of blood vessels? Can we manipulate blood platelets and see how neural signaling is affected?”

Currently Janusonis’s lab is considering methods that may allow them to observe the movement of platelets without harming blood vessels.

However, within this nebulous realm between blood and brain, Janusonis reiterates the importance of embracing an interdisciplinary approach, inviting collaborations amongst immunologists, physiologists, and even computer scientists  that could help develop software to automatically distinguish platelets from varicosities in 3D brain images.

“I’ve been trained as a neuroscientist all my life,” Janusonis said.  “Once you step out of your comfort zone into the blood with all these unfamiliar elements, it gets very challenging. But as you interact with people [from differing backgrounds], you start building these solutions. If we stay in the boxes we are comfortable with, little can get done.” As is the risk with most experimental studies, Janusonis acknowledges that his lab may disprove their hypothesis in the process.

“That is fine,” Janusonis said. “I’ll still be happy, because at least we started looking at some aspects of that system, and in science something interesting always crops up where you least expected it.”