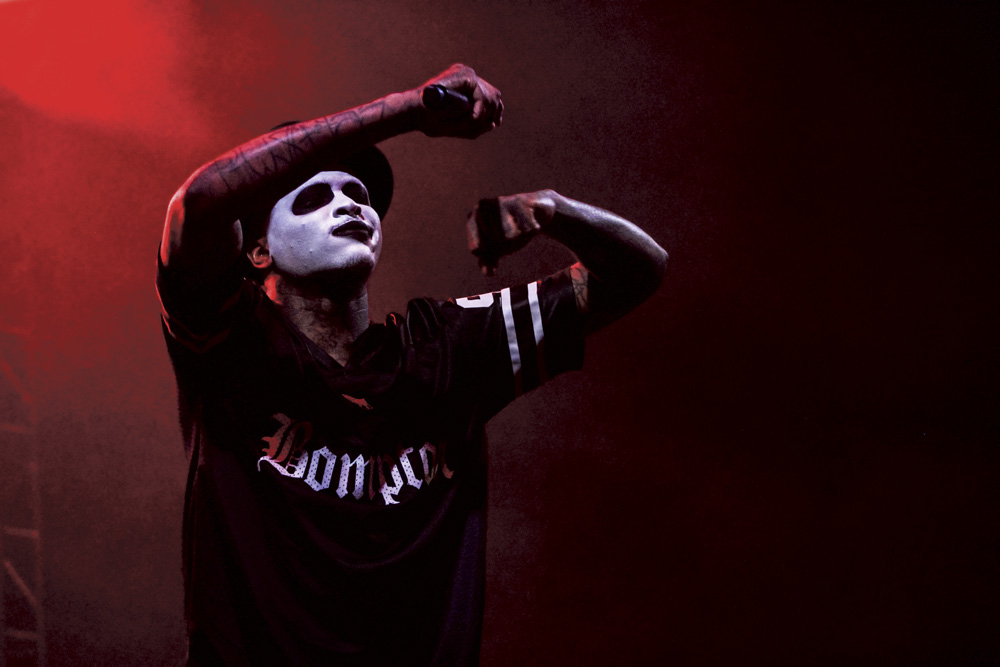 West Coast met East Coast at the Thunderdome last Saturday as YG and Flatbush Zombies rocked the stage. Students got a special treat this year when Delirium popped off an hour and a half after doors opened.

Flatbush Zombies took to the stage to an anxious crowd, opening with several songs from their recent album 3001: A Laced Odyssey. After a brief intro monologue, they exploded into action with “The Odyssey,” immediately awakening the Thunderdome from its lull. Meechy Darko, Zombie Juice, and Erick Arc Elliott bounced around stage and traded bars, blending their unique voices into a grimy and aggressive set.

Although the Flatbush Zombies have made a name in the hip-hop world, their music has yet to hit mainstream radio appeal, and their relative unfamiliarity among the crowd was apparent. Flatbush fans were certainly present, but the vast majority simply vibed off their stage presence and raw energy. They followed their opening track with “Bounce” and “Good Grief”, the latter of which featured a grungy extended acapella outro by rapper Erick Arc Elliott against eerie purple lighting.

The Zombies never slowed their assault, coming down into the crowd several times throughout the set. At one point, a sweaty, shirtless Meechy Darko announced that he would front flip into the crowd if he saw two mosh-pits during their next track, further fueling an already wild audience as people jumped and shoved as hard as they could. Two minutes later, Darko dove face-first into the front row while Zombie Juice and Elliott continued their verbal onslaught on stage.

Toward the end of their set, the Zombies instructed to the crowd to put up their lighters and phone flashlights and “If you know the words…sing…’till you lose your…voice. If you don’t know the words, shut the f*ck up and learn,” before performing a druggy and sluggish “Palm Trees”. By the end of the song, the whole crowd had memorized the chorus, singing along even after the instrumental ended. The Zombies’ obscurity was little detriment to an overall fantastic performance. Whether you like their music or not, there is no doubt that the Flatbush Zombies can put on a show.

As great as the Zombies were, they were no match for SoCal native YG. With only an hour left before the end of Delirium, YG swung into action to a chanting crowd after a minute-long introduction by his DJ. Donning white masks with fellow rapper Slim 400, YG performed several favorites from his most recent album Still Brazy to a seriously amped crowd. The audience jumped, danced, and sang along to every chorus of his popular singles “Twist My Fingaz”, “Still Brazy”, and “Why You Always Hatin?” Gone was any semblance of obscurity — save for an offbeat guest performance by Sad Boy Loko that had people asking, “Who?”

Bizarre detour aside, YG continued to dominate, weaving in shortened samples of several My Krazy Life songs while interacting with the audience in between. At one point, he and Slim walked around stage tossing apparel, along with YG’s own fedora, to a sea of awaiting arms. Another highlight was his verse from Jeremih’s “Don’t Tell ‘Em,” with the crowd screaming memorable lines, such as the one that follows “3-1-0-9-3-4-8-6-1-6…” Simply put, the atmosphere in the Thunderdome was ecstatic, as YG’s club anthems had the audience bumping and grinding on anything that moved.

Midway through the set, the DJ played a snippet of “FDT” before being cut off by YG, who began a minute-long rant about the impending presidential election. He talked about the importance of voting as well as discrimination against Blacks and Latinos by Trump, ending his rant by asking, “How many of y’all fucks with Trump?” to a resounding boo from the audience.

Throughout his set, YG’s stage presence was thoroughly convincing, and by the end, he had the crowd yelling “Hell yeah!” and “YG Fo-Hunnid” over and over again. After his brief political hiatus, YG returned to Delirium’s party with several classic bangers with “Toot It And Boot It,” Waka Flocka Flame’s “Grove St. Party,” and Lil Jon’s “Get Low.” YG was committed now, spraying a bottle of unnamed liquid during an explosive rendition of Kendrick Lamar’s first verse in “M.A.A.D City” amidst flashing, strobe-like lights.

It was a party at the Thunderdome, and YG was at the helm of it. At the end, YG announced he had a mixtape “coming soon” before bouncing offstage from a crowd still screaming.