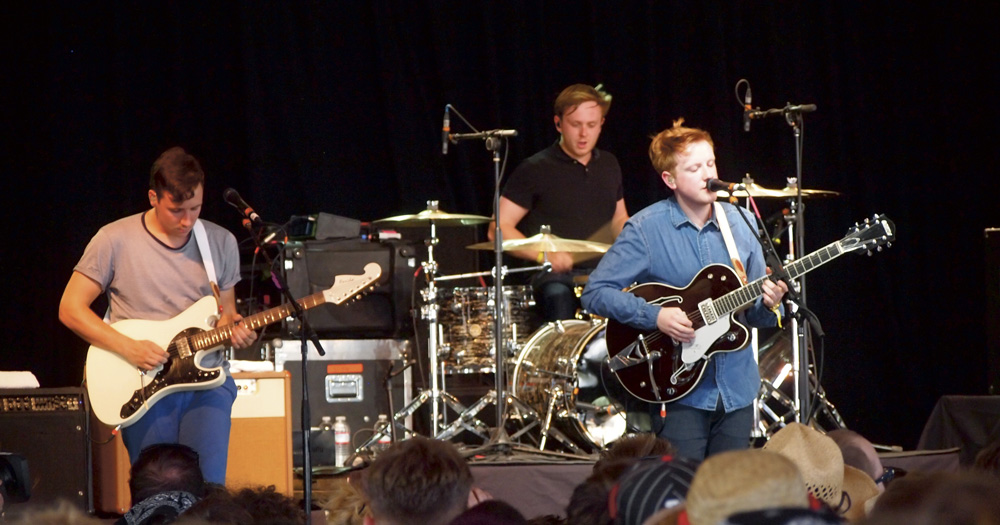 Back with a vengeance, late 2000s and early 2010s indie pop powerhouse Two Door Cinema Club came knocking again on Oct. 13 with their latest album, “Gameshow.” The Irish indie band’s third album is a bounce back from a four-year silence. With various band members seeking treatment for drug addiction and others pursuing individual projects, this return is definitely a marked departure from their previous music.

Two Door Cinema Club is known for catchy, fun dance tunes. If you read a little bit more into their lyrics, though, you’d be surprised at the kind of commentary they make on life and romance. While it’s nowhere short on message, most of the album’s instrumentals fall flat. Like a real game show, their third album only has three or four real contestants out of the entire lineup.

Synth comprises a prominent part of “Gameshow,” throwing any listener in for a loop to double check that they’re not accidentally listening to their parents’ ’80s playlist. The band cited Prince and David Bowie, two late artists of the decade, as influences on this album and it truly shows in the vaguely new wave tunes they produced.

“Bad Decisions,” the second single off their third album, is fun and upbeat — a sign that things are looking up for the band’s sound. It’s perhaps the closest the band gets to the catchy riffs of their old albums, but it certainly lacks the uniqueness of old songs like “Undercover Martyn” and “What You Know” that causes one to hit the repeat button.

However, what shines on “Gameshow” isn’t just “Bad Decisions.” Songs like “Invincible,” “Gameshow,” and “Ordinary” are among the few that stand out on the entire album.

The plaintive opening on “Invincible” is much different that the other songs on “Gameshow,” but the song has a sad, slow-dance, wallflower quality to it that makes it addictive to listen to. “Invincible” is the song everyone relates to, the chorus starting off with that self-aware, should-have-known tone (“I know you’re leaving / Cause I always take too long / Cause I always get it wrong / I’m a fool, I should’ve seen it”) and ending with that determination to make things better (“It’s gonna be a lonely, lonely road ahead / But I can find a way / To make things right with you”).

“Invincible” is easily the clearest song to understand. True to that self-aware quality, vocalist Alex Trimble lays it out bare: he did something wrong, and he knows it. Having hit rock-bottom, there’s nowhere to go but up.

On the eponymous song “Gameshow,” clapping on the lead-in might excite you and make you think that there will be a return to the songs off “Beacon.” However, it takes a unique turn that sounds like the right kind of departure from their old sound. It’s the kind of song that will leave you tapping your foot along, combining just the right amount of ’80s-sounding funk and traditional indie pop.

As for tunes like “Ordinary,” it’s perhaps a fitting name considering that Two Door Cinema Club is edging toward the poppy ’80s vibe that other noteworthy alternative/pop-rock acts like Bastille have been aiming for. Like many songs, “Ordinary” seems to be a reference to covering up the darker sides of living the high life, such as the prescription drug use and alcohol abuse that plagued band members Trimble and bassist Kevin Baird. “There must be something going on / Somebody has to know, somebody has to know,” Trimble sings.

However, it isn’t just another “ordinary” dance tune: “Ordinary” clocks in just a second shy of five minutes, filled with instrumentals that will cause you to bop your head along. It’s slinky and slithers in the way that popular ‘80s songs like Michael Jackson’s “Thriller” does.

“Gameshow” skids past the indie quality of Two Door Cinema Club’s debut and sophomore albums and rests solely on the “pop.” The tracks are fairly polished, seemingly unique enough to lurk in a Forever 21’s store playlist but probably not the kind of songs that will land on someone’s permanent Spotify playlist. If you’re looking to relive the days of 2011-2012 indie pop, or something more distinctive than some of the radio-ready songs produced nowadays, consider looking somewhere else.