Here’s a riddle: what would you call an individual who believes in an institution’s — or company’s — responsibility to remove social ills and promote equality for all?

To some, they may be considered liberal. To others, it may be more fitting to portray them as “professional complainers” than anything else. Due to the fact that my beliefs tend to fall on the left side of the political spectrum, I was surprised when I found myself — in some instances — relating to the thought process of the latter.

There is certainly no lack of controversial news in the media; looking between the upcoming presidential election, and the regular dosage of drama that internet users love to provide to the world. Yet, there has been two headlines that have stuck out to me as a little more fatuous than most.

Earlier this year, the boot company Timberland was called out by a handful of Facebook, and Twitter users for having racist undertones in their new “Mono Grey” shoe release. The cause of distress spawned from the company’s trendy addition of twisty shoelaces that pop out from the top of the boot and hang down — right over their signature tree logo.

If it wasn’t for the abundance of negative feedback that their new boot design garnered, I wouldn’t have had a second thought about it. One user commented in a Facebook post saying the company must be racist due to the fact that “the shoe string is tied like a noose hanging by the tree” — which then would insinuate the old Southern practice of lynching.

Not too long after this incident, Gap Kids also received a spot next to Timberland on social media’s version of the “Burn Book.” The catalyst of this reaction came through an ad that pictured a tall white girl posed leaning over a much smaller black girl. Some people sought instantly to depict this as the company conveying blacks as nothing more than servile furniture.

Before we quickly go on shrugging our shoulders and hastily conclude that people who are fighting for social rights simply tend to “get offended by every little thing,” it would do some good to turn into a social archeologist and dig under the surface a bit.

While they certainly make for ridiculous headlines, the emotion that stems out of these accusations is sensible. Hundreds of years of history can tell you that much. But the problem is that sometimes people get too caught up in the small controversy of the matter, and fail to bring up the real matter at hand.

The energy spent dissing Gap Kids could be better spent discussing the core issue of minorities being underrepresented or misrepresented in media. When people get mad at an advertisement that was nothing more than a friendly pose in front of a camera, it complicates the real message. It causes a large majority of people to focus on the absurdity of the accusation rather than the reality of the situation.

Recently, the Million Student March addressed not only national issues like prison disinvestment, but the situation of offensive chalking that has taken place over the past few weeks on campus. In a response to the small group of individuals, students displayed a chalk wall to promote positive messages.

Although there is certainly nothing wrong with spreading good thoughts, it seems like there’s a semi-ping-pong match going on. One group does something, and the other reacts, with the result becoming just like the instances that happened in the media — no real lesson is being addressed.

For people who are trying to effectively promote more social equality, the sooner you stop the controversy from clouding your focus, the better your vision will shine through. 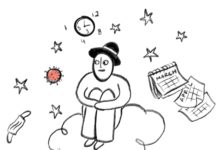