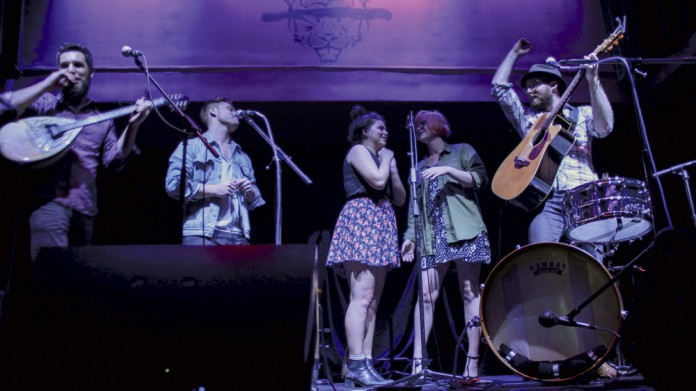 RIVVRS is originally from San Francisco and now hails from Los Angeles. He lived in Napa for a while, constantly emailing a local venue in hopes of opening for one of their acts. His efforts led him to opening for Jewel at her stop in Napa two years ago. To support his latest album, Unfamiliar Skin, he is currently touring across California with indie group Distant Cousins.

The show opened with performances from The Brambles and Distant Cousins. One of the three members of Distant Cousins was not able to perform, so RIVVRS played the harmonica and sang backup vocals during part of their set. Distant Cousins played guitar, the drums and the zuki (a Greek instrument). Blending this with their powerful voices constituted for a high energy performance. The group performed a cover of Rihanna’s “Stay” and as well as their songs “Are you Ready (On Your Own)” and “Raise it Up.”

RIVVRS performed next, accompanied by his acoustic guitar. His raspy, sultry voice is strong throughout the entirety of his performance and the passion behind every song is apparent. He performs an acoustic cover of Jackson 5’s “I Want You Back,” as well as “Slide” and “Swim for Sharks.” RIVVRS truly owned the stage with his phenomenal stage presence and showcased his emotions for the audience. The setlist had a balance of soulful and fast-paced melodies.

He invited Distant Cousins to the stage him to perform “Can’t Get it Right,” a song they all penned together. Their chemistry was evident as they played off of each other’s onstage energy. With the sound of their stomping feet, drums and increased energy leading into the chorus, they commanded the attention of the entire crowd.  “I Will Follow You” was the last song of the evening and is his biggest song to date. RIVVRS’ acoustic performance was a joy to watch, and any upcoming show of his is not to be missed.

But before watching the show, we caught up with RIVVRS to talk about his experiences as a touring musician.

What inspired you to record music?

I’ve always loved music and listening to different bands. When I was younger I emulated them and wanted to learn how do something on my own. I was 13 or 14 when I actually tried it and picked up a guitar. I was always really timid to show anybody and I would record mostly covers or unfinished versions of songs. After high school, I had a grasp on it and decided I wanted to pursue music.

How has your tour experience been so far?

Good so far! This is the first time that I’ve toured as RIVVRS. I’ve done a lot of touring in my life, playing small venues and house concerts, but this is the first proper tour with an album behind it. The second leg is going to be with a full band. So far, it’s been really nice and local. We’re heading up to San Francisco soon, and it’s always nice heading back home.

What has been one of your favorite fan interactions so far?

Someone who I call a friend now emailed me saying that he loved the song “I Will Follow You” and he asked me to send him a personal video playing the song for his girlfriend. He emailed me a couple of weeks after the wedding and said his wife died that night. She had a really serious disease and it was only a matter of time. They wanted to get married before that and the song was such a connection to that. I suggested we make a tribute video to her for my song “Conquer.” He’s flying down from Oregon to see my show in San Francisco and it will be the first time we meet in person. These kinds of moments don’t happen in life very often so to have it happen through music is very powerful.

What are your favorite parts about playing intimate venues?

I like the intimacy because it makes you feel vulnerable, it’s hard to hide and everything is just out on the table. It’s a good way to connect with people. The bigger venues are definitely cool and a great experience but there are a lot of things that could go wrong. I like the simplicity.

Do you have any projects that you are working on?

This album, called Unfamiliar Skin and it is coming out March 25 so I’ll be continuing to tour for that. I have a lot of songs recorded so I think I will have a follow-up EP coming at the end of the year or the early part of next year.