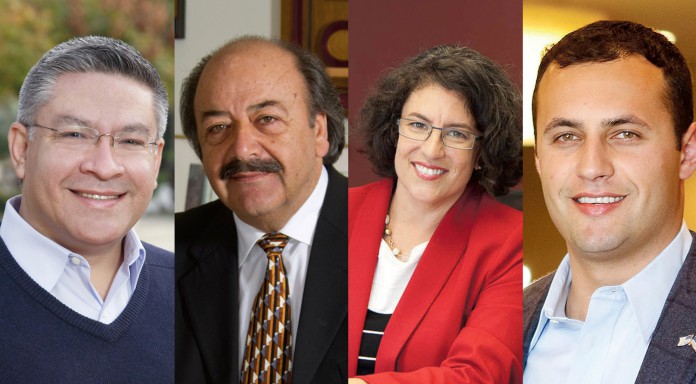 So far, the race to replace Rep. Lois Capps as Santa Barbara’s voice in Congress remains as crowded as the 2016 presidential contest, with an even more competitive party divide.

Santa Barbara Mayor Helene Schneider and First District Supervisor Salud Carbajal occupy the top spots on the Democratic side, while State Assemblymember Katcho Achadjian and businessman Justin Fareed lead the Republican race. But with California’s primary still over three months away, there remains plenty of time to change voters’ minds.

Carbajal’s strong candidacy was assured from the start, with the official support of Lois

Capps herself. That endorsement has been followed by another from the Democratic Women of Santa Barbara County and support from 83 percent of the Democratic National Committee’s grassroots delegates.

The three-term district supervisor plans to tackle a broad swath of issues should he win the seat, especially those that support a strong middle-class economy. Objectives for a higher minimum wage, reasonable family leave and increased access to education in large part stem from his own middle-class background growing up.

Carbajal’s parents were immigrants who moved their family to Arizona — where his father worked as a miner — when he was five years old, before settling long-term in Oxnard to pursue farming.

To address the much-contended issue of minimum wage, Carbajal proposes a “meaningful raise” — even if it’s short of the 15-dollar mark advocated by other politicians — as the current federal figure often fails to cover living expenses. He also emphasizes flexible family leave, supplemented by universal child care and preschool, to allow parents a balance between their personal and professional lives.

But Carbajal argues that raising wages alone won’t translate to college access in a country buried by inflated tuition rates and student debt by the trillions. Carbajal also wants to expand access to grants and restructure loan programs, with the goal of lowering interest rates for students who must take out loans. Public service programs should also be expanded, he said, to create opportunities for debt forgiveness.

Like her Democratic opponent, Schneider has devoted most of the past 15 years to city governance — most prominently as the sitting mayor of Santa Barbara since 2010 — and believes she can translate her local successes to progress at the federal level.

As a city councilmember, Schneider joined now-Assemblymember Das Williams in sponsoring the 2006 Living Wage Ordinance, which required private companies with at least $15,000 in city-contracted business to pay employees a minimum $14 per hour, with deductions of a dollar or two permitted for those offering individual or family health insurance.

A Living Wage Advisory Committee ensures those wages stay tied to inflation, a factor Schneider said will be crucial to federal policies moving forward, “so you don’t have the situation we have now where you’re static at a number, and the cost of living goes up. And that way businesses can actually foresee how things are going to move into the future.” Among other policies with potential for federal reach, she noted California’s family leave program, which offers six weeks paid leave each year; the federal government currently offers 12 weeks of unpaid leave.

Schneider nonetheless said a wage is only “livable” if it accounts for expenses like health care, which remain steep even for those covered under the Affordable Care Act. In her view, the government needs more leverage in negotiations with the pharmaceutical and insurance companies to secure affordable prescription prices and reimbursement rates.

To ease the economic burden placed on college students and their families, Schneider, like Carbajal, proposes greater grant access and a broad restructuring of federal loan programs with opportunities for students to refinance their loans in much the same way a homeowner might refinance a mortgage. Under the federal Development, Relief and Education for Alien Minors (DREAM) Act, she declared all first-generation children of undocumented immigrants eligible for these benefits and hopes to provide a path to citizenship for their families.

Schneider also holds that long-term water conservation will be key to continued prosperity nationwide. At a federal level, she recommends diversification of water management, including measures like potable reuse, desalination and investment in new infrastructure to enhance water supplies in the long term. After two years of mitigating a drought in her own city, she feels best equipped to spearhead such policies.

Achadjian sports arguably the heftiest legislative resume of the frontrunners, with three Assembly terms preceded by 12 years on the San Luis Obispo County Board of Supervisors. His understanding of the American Dream is driven in large part by his own 10-year path to citizenry as a Lebanese national in the early 1970s, an experience that’s lent more forgiveness to his stance on immigration than those of some other conservatives currently seeking political office.

“I completely support those who desire to come to America and work for an honest living, but they must do so through legal channels,” Achadjian wrote in an email. “We must overhaul our current naturalization process so that those who want to work here and provide for their families can do so in a more streamlined process.”

He draws the line at amnesty and other criminal forgiveness for undocumented aliens, and proposes more vigilant border control as well. Opportunities should be expanded for students as well, he claims, including zero-interest loans with flexible repayment schedules.

Lifting burdensome regulations on small businesses will be key to unleashing untapped economic potential, Achadjian said. The legislators who pass such regulation are often “not in touch with the working people” and, in his view, should better communicate with industries — especially on the Central Coast — to establish more flexible rules for starting and operating businesses.

“Often times, it seems that our government’s regulations exist to catch the mistakes of small businesses rather than support them,” he wrote.

Cost-saving energy measures could also contribute to both a healthy employment rate and healthy economies, he argued, pointing to his assembly bill that in 2012 brought over $638,000 in grant money to San Luis Obispo County for the development of renewable energy facilities. These employment objectives would ideally be paired with a simplification of over 70,000 pages of U.S. tax code, so that Americans need not hire professionals to decipher it for them.

Within Congress, Achadjian favors a firmer stance on the federal budget, which the House and Senate have repeatedly failed to balance on time. To him, a “no budget, no pay” policy for congress members seems an appropriate remedy for a problem that boils down to poor job performance.

“It’s time to treat Congress like all working Americans,” he wrote. “[I]f they don’t do their job, then they don’t get paid.”

Surging from left field — or right field, as the case may be — is Fareed, the 27-year-old businessman with limited political experience but considerable momentum. Born and raised on the Central Coast, he hopes to bring a new generation of leadership to Washington and meaningful action to the 24th District.

“I think it’s necessary that we have a voice to represent us here that replaces the political insiders that have failed to provide what we need here in the district as far as representation and the policies that are going to affect this and future generations,” he said.

Like his conservative rival, Fareed is a small-business advocate, but he sees burdensome regulation largely as a consequence of executive overreach and a persistent lack of “sunset” provisions in legislation. Such clauses specify a period of time after which a law must be submitted to Congress for reconsideration or possible improvement.

“Any regulation or rule that is issued by the executive branch needs to have oversight of Congress,” he said, “because Congress is there, and needs to be there, to serve the will of the people. We’re supposed to be the ones who are closest to the people.”

He suggested an expansion of college savings accounts for both students and parents to help with higher education expenses down the road. In theory, these tax-free accounts would allow for continuous investment until each student comes of age, at which point they could allocate the money to a four-year education, alternative vocational training, or even a start-up business.

Opportunities should be available to undocumented workers as well, Fareed said. Beyond increased border control, he proposes a “universal verification” system for farmers to screen potential workers, as well as a “guest worker” program that would permit non-citizens to legally work in the U.S. on a seasonal basis.

“It would help ensure certainty of employment,” Fareed said. “It would also keep costs manageable for us at the grocery stores when we’re going in to buy our vegetables and fruit. That would be an example of an immigration policy that would be merit-based, flow with the economy and improve circumstances for all of us.”