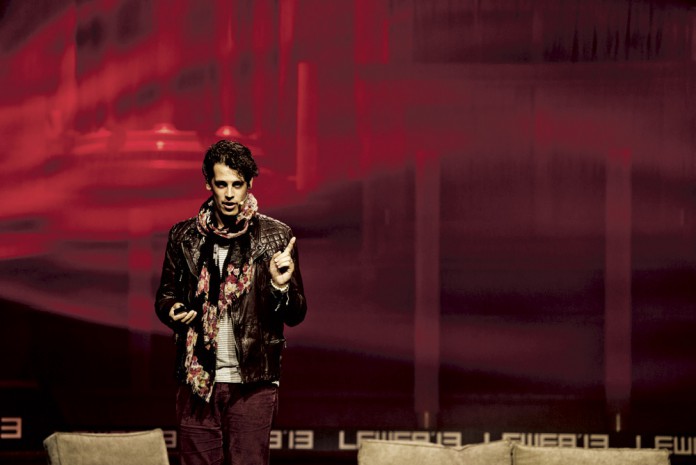 The latest disease to grip college campuses across the country has little to do with bacteria or sexual transmission and everything to do with modern feminist ideals.

A controversial movement demonizing today’s feminism will make its debut at the University of California, Santa Barbara in late May, at the invitation of the UCSB Young Americans For Liberty (YAL). The new student group will host journalist Milo Yiannopoulos at Corwin Pavilion on May 26, where he will share the ideas behind his “Dangerous Faggot Tour.”

Yiannopoulos, an editor for news site Breitbart.com and self-described “firebrand,” chose the name to reflect his nontraditional identity as a conservative homosexual man who supports “offensive free speech” as the key to social progress. In a talk last week at Rutgers University, he criticized movements like third-wave intersectional feminism and Black Lives Matter for stifling academic discourse.

Yiannopoulos has decried the use of trigger warnings and safe spaces as ways to avoid discussion of contentious viewpoints, and even indicated that students who seek such protection should be expelled from their universities. Without offensive free speech, he claims, gay marriage may not have been legalized, nor civil rights achieved for women and minorities.

Free speech is the primary concern of UCSB’s libertarian group, according to YAL Co-Presidents Brandon Morse and Carlos Flores. After years of dormancy, the UCSB chapter was revived last fall to challenge campus norms.

“We know that this event will be controversial, will be protested,” Flores said, “but we want to use that as a way to remind people that the First Amendment protects everyone’s right to free speech… and no whining is going to shut it down.”

Flores describes a “feminist orthodoxy” on campus that, if questioned, inflicts widespread hatred upon its skeptics. Morse likewise called campus conversations on the issue “one-sided.” Both said this bias also extends to the classroom, where professors threaten to remove students with controversial opinions.

Online speech seemed to flow freely, as evidenced by the level of user engagement with a Facebook event — entitled “Feminism Is Cancer,” a title which Yiannopoulos did not choose — advertising the talk. Posts and comments by students, like fourth-year English major Nada Elshaari, have sought rational dialogue with the event’s sponsors and supporters.

Over the course of some online back-and-forth, Elshaari coaxed one anti-feminist sympathizer into recognizing the rape culture he had earlier denounced. But the exchange was not always so amicable.

Her challenger maintained that he too hates misogynists and that he, too, understands that feminists do not hate men. But Elshaari claimed that those fundamental beliefs do not translate to broader reform of patriarchal structures, arguing, “there is more prevalent reinforcement and perpetuation of misogynistic ideals that manifests itself in different arenas.”

Elshaari also questions Yiannopoulos’s equalizing mission for its strident opposition to the feminist ideals that she believes work to similar ends. In a recent interview, she wondered why a prominent public figure straddling such seemingly incompatible demographics would be “so explicitly against something that eradicates the root of a problem that a lot of people face… including what he faces.”

The controversy has engaged students from other UC campuses as well. Third-year biology major Annie Ashmore of UC Davis posted an article last week titled “A List of Men’s Rights Issues That Feminism Is Already Working On,” outlining a number of men’s issues—from prison rape to alimony payments—that could be attributed to the same patriarchal structure feminism seeks to dismantle.

“It’s too bad that a lot of libertarian groups claim to support equality and freedom, but they only speak out when they think that cis[sexual] white male equality/freedom is being threatened,” Ashmore wrote in an email. “They often interpret calls for cis white men to educate themselves and check their privilege as attacks on free speech/expression.”

Masters candidate Timothy Irvine, who also serves as Vice President of Committees and Planning for UCSB’s Graduate Student Association, has been one of the most active opponents on the event thread. In his view, YAL’s demands for equal space in feminist discussions and other minority campaigns ignore structures of oppression reinforced so long by history that they persist even after law books reflect their correction.

“It’s a pretty twisted appropriation of the rhetoric of marginalized people, who have a proven need for increased resources, equity, and spaces safe from physical, mental, and emotional harassment, persecution, and assault,” he wrote in an email.

Like Ashmore, Irvine held that the YAL’s stances reflect a misunderstanding of modern social justice efforts. “There is massive diversity of thought and contentious debate within feminist and other social movement discourses,” he wrote.

Next on UCSB YAL’s agenda is “Free Speech Ball,” which will invite students to share their uncensored thoughts through inscriptions penned on a beach ball, according to Morse. The goal is to depict the prospect of a society stripped of delicate language and false sensitivity.

“The chilling effect on free speech is real,” Morse said.

In a recent piece for Breitbart, Yiannopoulos credited his large social media following to “speaking for the voiceless majority against the powerful minority.” He draws a sharp contrast between his role and that of “social justice warriors,” who he claims marginalize almost all groups that do not directly align with their views.

“You guys hide, you exclude, you specialize, you basket all your eggs,” he wrote. “You’ve turned your mastheads, comment sections, Twitter feed and safe spaces into aristocratic digital country clubs like something from the 1920s, ejecting each problematic group, religion, philosophy, subculture, and political bent one by one.”

An earlier version of this article mistakenly attributed quotes by Carlos Flores and Brandon Morse, due to a miscommunication between the two sources and the author during a conference call interview. The Bottom Line regrets the error, which has been corrected above.