University of California, Santa Barbara students and Isla Vista residents are aghast at a spike in ticketing for bicycle violations. With students facing up to $197 in fees, many are split on whether Isla Vista and campus culture should prevail over law enforcement’s efforts to regulate bike safety.

Allegations that officers with the UC Police Department (UCPD) stake out certain spots in order to meet their quarterly ticket quota run rampant during this time of year. Students have reported seeing police waiting by the sidewalks and bike paths next to the Arbor, Social Sciences and Media Studies (SSMS) building, MultiCultural Center (MCC), San Clemente roundabout and Pardall Tunnel. Some police have been accused of hiding out of sight in order to avoid pedestrians before ticketing them.

At these locations, there are numerous signs warning students about which ordinances they violate if they skateboard through no-skateboarding zones, and the fines that they can be expected to pay if they break them.

According to documents on the UCPD website, bikes must remain on the bike paths and yield to pedestrians attempting to cross. Bicyclists must obey California vehicle law, which includes hands-free phone usage and avoiding hit-and-runs. The complete list of rules and regulations can be found on the UCSB UCPD website.

UCPD Corporal Matt Stern reports that their forces hear and respond to approximately 30-40 collisions with major injuries on campus and in Isla Vista each year, with some students even withdrawing from the university temporarily to recuperate from accidents. Officers are posted in certain locations not to meet ticket quotas, but to lower rates of bike accidents in high-traffic areas. 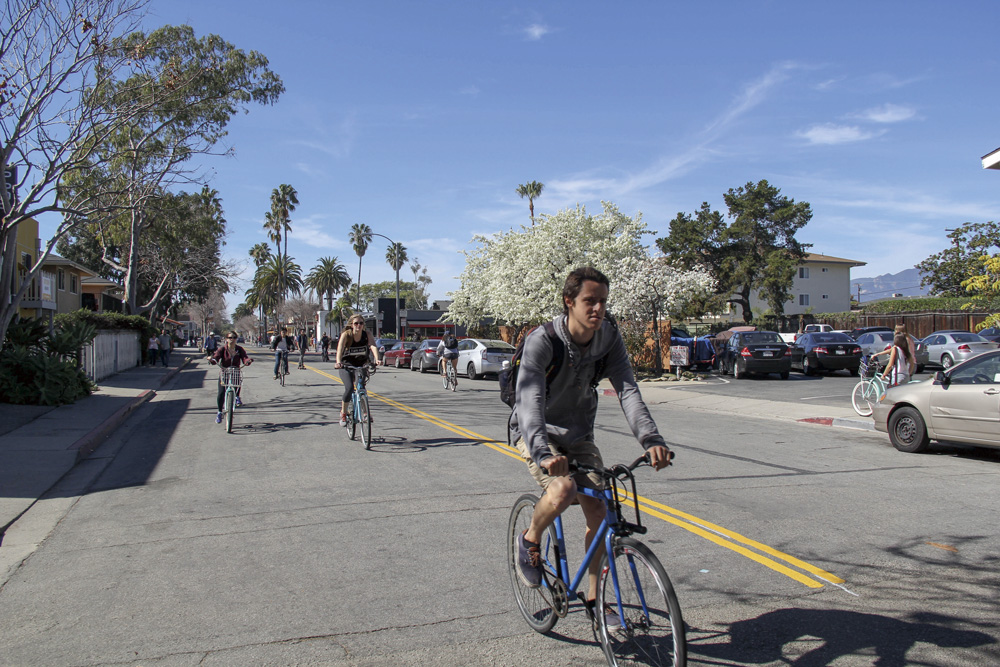 “To best care for our community’s safety, we regularly study community data including accidents and enforcement requests to identify areas and behaviors of high-risk,” Stern said.

“Areas such as Pardall Tunnel and the Arbor have a higher risk of injuries and complaints than most other places on campus. For example, I have spoken with numerous pedestrians who avoid using Pardall Tunnel because they are afraid of being struck by a skateboard, and their fear appears rational when you consider one out of four Gauchos reports being struck by a skateboarder.”
Stern also said that contrary to popular belief, California does not treat bikes as vehicles in legislation, only on the road. Violations such as failing to stop at a stop sign may appear on someone’s court record, but according to him, should not affect car insurance or driving records. Regardless, they are subject to enforcement.

Students have taken to social media to alert the community of times when police are ticketing at a certain spot. On Facebook and Yik Yak, “public service announcements” with photos of police standing by the entrance to Pardall Tunnel or next to SSMS garner hundreds of likes, often following their own citation.

First year pre-biology major Jeffrey Sakburanaphat was one of the students ticketed. On his way to class on Mon., Feb. 8, he failed to stop at the stop sign next to the MCC and College of Creative Studies building, and a police officer pulled him over. When a nearby police officer asked him to stop, he admitted that he had knowingly run the stop sign.

“Technically, I deserve it because it is breaking the law,” Sakburanaphat said. “But I feel unlucky because I was basically singled out.” He said that while he was receiving the ticket, several other students ran the stop sign on their bikes, as did cars.

For Sakburanaphat and others ticketed on campus, there were two choices: pay the $197 citation, or $35 for a traffic school class. On campus, the citation is made out to the UC Board of Regents, rather than the county, as UCPD serves as the police force for the university. Fees can be even higher if the person violates multiple parts of the bike/skateboarding code of conduct. Stern reports that police have issued 34 bicycle citations so far this year, on a campus with approximately 20,000 bikes. 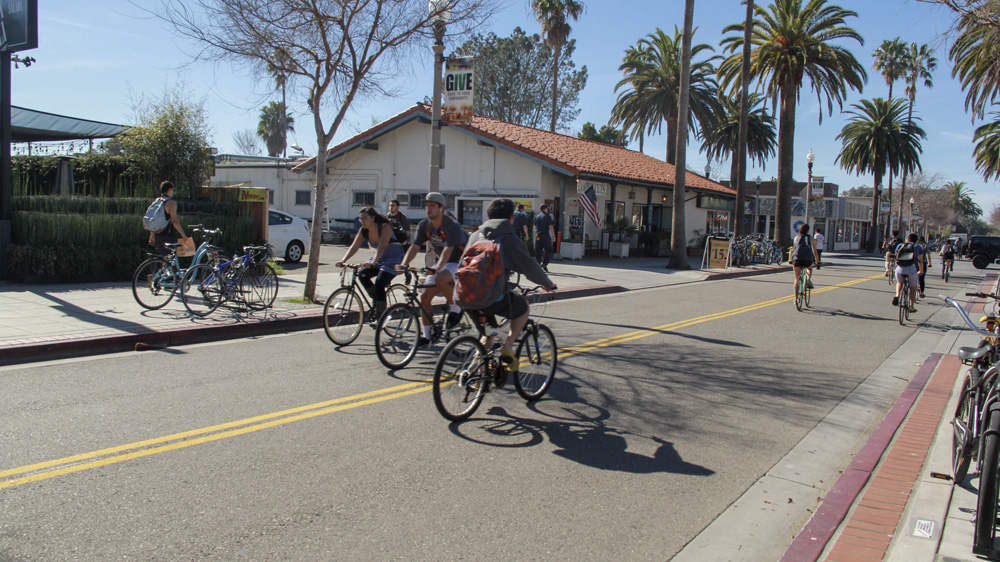 At the same time, these go hand-in-hand with student posts asking others to be careful while biking and warnings about bike safety from the perspectives of those who drive through IV. People have spotted California Highway Patrol (CHP) ticketing, which some find out of the ordinary since IV Foot Patrol normally handles infractions in the area.

UCSB alumnus Ricky Waltham was the first to post about CHP’s presence following his own ticket. CHP explained to him that they were in town to prevent bike collisions and violations following a large amount of complaints. Some responded angrily, noting that it was almost impossible to mandate that bicyclists passing through Isla Vista stop at every stop sign.

“We all know that it’s become culturally ingrained in IV to give bikes the right-of-way,” Waltham wrote in a post on the UCSB Free & For Sale group. “When I first moved here, I thought it was weird too. But there are laws for a reason. Just because it’s normal here to ignore them doesn’t mean we’re exempt from the consequences of breaking them.”

Angry drivers expressed their irritation with the bikers who fail to practice bike safety. Some would like more cops in the area to ticket, while others simply want people to be more aware of the laws.

“I get the frustration with getting a ticket and I know IV is a bike community but like … why are so many people complaining trying to defend breaking the law?” fourth year communication major Alex Messick wrote in response to opponents on Waltham’s Facebook post. “If the cars follow the rules, so should you. It’s not like there is a shortage of bike-friendly paths to school with little car traffic. If you’re on a main road in IV it seems like common sense/self preservation to follow the rules.”

Bike Committee will continue to work on the Idaho stop sign law, which the resolution is modeled after, along with a bike safety campaign.

It seems as if most students who have complaints are concerned not with the laws themselves, but rather their enforcement and viability in the community. However, student administration and UCPD are hoping to better educate students, rather than stringently enforce what is in place.

According to Wu, “We pulled the Idaho stop resolution from the senators for debate since, one, if we allow Idaho stop on campus and students travel elsewhere, for example, downtown, they would be confused since they would have to actually stop at stop signs there. Also, two, it poses a liability to students since we would be encouraging not stopping at stop signs, even though that’s not the case everywhere else in Santa Barbara.”

“Idaho stop would be a temporary solution to the bigger problem, which is our biking culture of not following bike safety education,” Wu said. “Bike Comm originally decided to go with the senators’ resolution because we considered the temporary solution, but upon hearing hearing all the UCPD and student input, have looked to bike safety education as the primary solution. Also, we were confused at first because we are only mentioned in the last part of the resolution, which calls on us to provide a large scale bike safety campaign for students.”