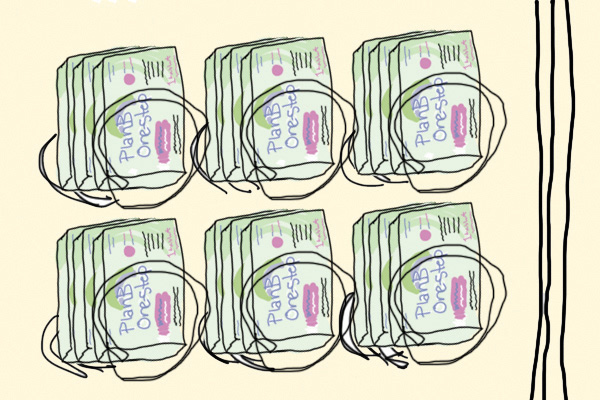 You wouldn’t ordinarily expect Health and Wellness to put in a funding request for a vending machine … unless it gives out Plan B and condoms instead of candy and chips.

The contraceptive vending machine, which was approved on Nov. 2, 2015 by Associated Students Finance and Business Committee, will cost UCSB $11,500 (or around 50 cents per UCSB student). But was this really the best possible expenditure of student money?

Proponents of the vending machine feel that it will give students easier access to Plan B emergency contraceptives on weekends, when Student Health is closed. But how hard is Plan B to get, really? There are a number of other pharmacies in the UCSB area which provide Plan B, and a Planned Parenthood clinic in downtown Santa Barbara.

In addition, young women who might need an emergency contraceptive for whatever reason have the option of buying Plan B beforehand at the UCSB Student Health pharmacy (where it is sold over the counter for far cheaper than its market price) and keeping the drug in case it ever comes in handy. Anyone mature enough to be having sex is mature enough to take this sort of responsibility. Does UCSB have so little faith in its students’ ability to plan ahead and think proactively that it needs to spend thousands of dollars on a vending machine that will make Plan B only marginally more accessible?

The vast majority of UCSB students already have easy access to contraceptives. We have been given absolutely no reason to believe that the vending machine was worth such a big investment.

Although I fully support the right to use contraception and encourage anyone who is sexually active to do so, I think it is worth questioning whether UCSB should play such an active role in subsidizing its adult students’ extracurricular pastimes. However, my greatest concern about the vending machine is that it may serve to marginalize students with minority viewpoints at our school.

Let me remind you: Plan B works in several ways. It is not an “abortion pill,” and its main functions involve preventing fertilization. However, according to the medication’s website, one way it can work is by preventing a fertilized egg from attaching to the uterus. As you might imagine, this makes Plan B fairly controversial, and it has been at the center of a good deal of political controversy in our country.

I am pro-choice myself, and I support any woman’s right to use Plan B emergency contraceptives for any reason she deems necessary. But I also know some pro-life individuals who feel differently from me and who would object to Plan B for moral reasons. These people aren’t idiots or Neanderthals. They don’t hate women. They are good people who simply happen to have a different answer than I do to an extremely complex moral question. Don’t their voices matter, too?

When we force UCSB students who believe in good faith that human life begins at conception to fund a pill that may lead to the death of a conceived human embryo, this is not a pro-choice position. This is an anti-choice position. By preemptively acting as though debate on Plan B is closed, Associated Students has sent a clear message that there is only one appropriate way for students to think. This, of course, goes contrary to the spirit of academic inquiry.

As a democratically elected governing body, Associated Students has a duty to represent the interests of all students, including the pro-life minority here at UCSB. Did it take them into account when making this decision? Associated Students claims on its website to be “A Place For Everyone,” but this decision shows that it is not a place for pro-life students. And although I tend to agree with the majority at UCSB on the issue of abortion, I have enough unpopular views to be very concerned about our school’s treatment of dissenting voices.

Many in the UCSB community strongly support making contraception more accessible. Perhaps Health and Wellness could have harnessed this passion by soliciting voluntary donations to support the vending machine from those who genuinely believe in its purpose. I might have even donated to such a cause. But forcing all UCSB students to assist in the financing of this contraceptive vending machine goes against all notions of fiscal responsibility and good sense.