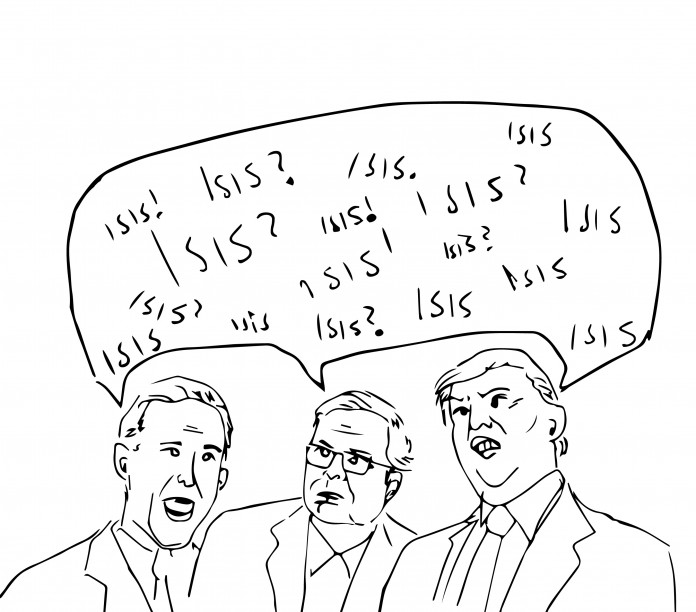 On Mon., Jan. 6, Donald Trump released his first inaugural television advertisement just a few weeks before the Iowa caucuses. The advertisement highlights many issues he has already spoken of, such as calling for a temporary ban on Muslims entering the United States, “[cutting] the head off of ISIS,” and “[stopping] illegal immigration by building a wall on our southern border that Mexico will pay for.”

Amusingly enough, the people fleeing toward what looks like a crossing when the voice in this advertisement calls for a wall on the United States southern border are from Morocco, not Mexico, Politifact reports. The footage is from an Italian television network, RepubblicaTV, which posted footage in May 2014 of migrants crossing into Melilla, a Spanish enclave on the Moroccan coast.

“The use of this footage was intentional and selected to demonstrate the severe impact of an open border and the very real threat Americans face if we do not immediately build a wall and stop illegal immigration,” Trump’s campaign said in response, according to Politifact. “The biased mainstream media doesn’t understand, but Americans who want to protect their jobs and families do.”

TV advertisements provide candidates with a small window of time where they can appeal to voters. Ideally, they should use this time wisely to relay the strongest points of their platform with emphatic charisma, providing new information that hasn’t been covered in past speeches if possible. Even then, it may be difficult for candidates to sway potential voters as TV advertisements slowly lose their footing to newer technologies, such as social media advertisements.

NPR predicts that the presidential campaigns of 2016 will spend about $4.4 billion on TV advertisements. Ohio governor John Kasich’s campaign has already spent $375,000 in TV advertisements, and there have been seven times more political ads in the 2016 election than there were at this point in the 2012 election.

Candidates spending exorbitant amounts of money on TV advertisements is nothing new — it’s practically standard operating procedure for any election. The problem is that it serves little purpose when so many voters already have a clear idea of who they will vote for. Though TV does reach a wide and diverse audience, it won’t necessarily be able to influence that many people in that audience. With this in mind, Trump’s advertisement appears rather ridiculous, and it will likely fail to sway any voters who do not already support him.

It takes a large number of advertisements to significantly influence even a small percentage of voters. “Even if your ads are effective, they’re chasing a small group of people,” a 2010 study, conducted by Bowdoin’s Michael Franz and Washington State University’s Travis Ridout, reported, according to NPR. “In the big races like the presidency, campaign advertisements only work at the margins — they might affect the (very) small share of people in the middle, but lots of Americans will fall in line with their parties.”

So why do candidates spend so much money on TV advertisements anyway? If they do nothing but reiterate the same points the candidates have already made during speeches and debates — “[cutting] the head off of ISIS” seems to be particularly popular this season, just as “[ending] Obamacare” was in 2012 — then what’s the point?

The image of a male peacock flourishing its plumes come to mind — perhaps the candidates are simply trying to outdo each other in terms of how much they spend. It’s a display of power and wealth, at the very least, though not necessarily influence. Or perhaps candidates are reluctant to change the status quo, considering the role TV advertisements previously played in elections. With this in mind, Trump’s advertisement doesn’t really tell us anything new, since all it does is rehash the same old arguments — it’s just there for the sake of Trump’s campaign having a TV advertisement under its belt.