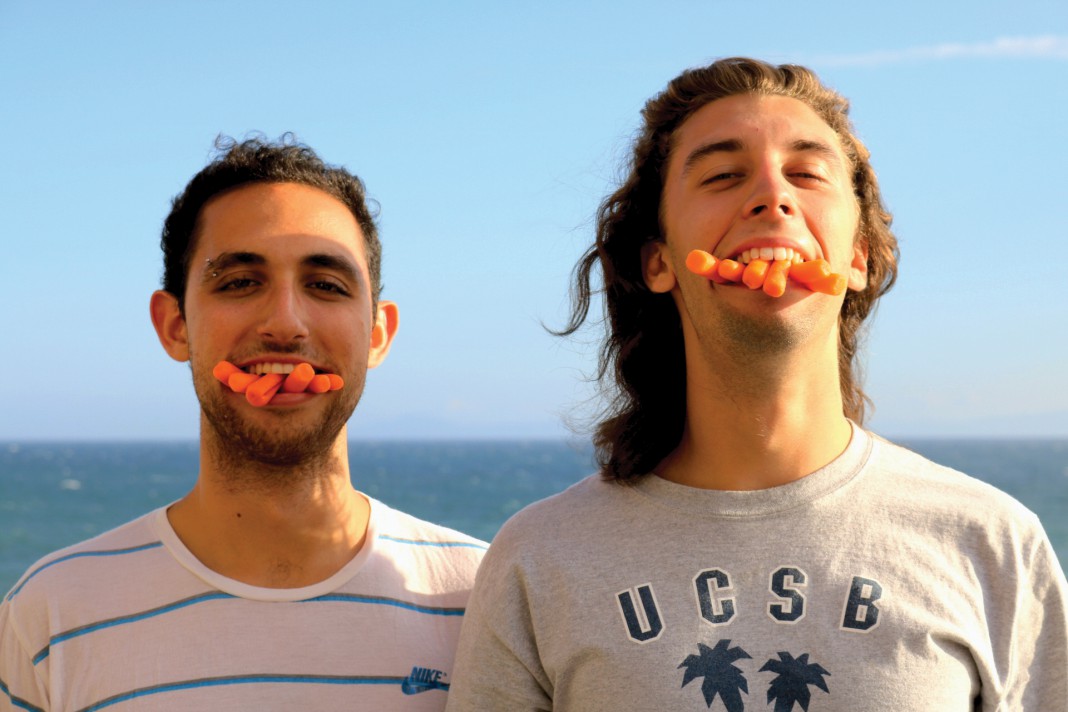 Two seniors at the University of California, Santa Barbara, Adrian Molzon and Joshua Swedelson, have made it their goal to dine at every restaurant in Isla Vista. They want to graduate with “no culinary stone unturned.”

“I think it’s just our senior year. Most seniors have their wish list they want to knock out,” Swedelson, an economics and accounting major, said. “We were like, ‘what else could we do to complete the Isla Vista experience?’ Adrian and I like to eat, so food seemed like the most obvious choice.”

“On top of that, there are so many small restaurants in Isla Vista that come and go,” Molzon, a physics major, added. “We wanted to hit every single one of them and do it methodically.”

So what is the method?

“Hit them all,” the dynamic duo said, grinning.

Their method is a little more complicated than that. The tour includes any place that serves food in Isla Vista. Because both Swedelson and Molzon are aware of the more frequented places in Isla Vista, they hope to shed light on smaller and newer businesses. For more popular restaurants, they plan on getting a dish on the menu that’s not as common.

As for smaller business, Molzon said, “It might be worth it to go with the popular meals and the meals that are well-known.”

In addition, the eatery explorers plan on getting custom t-shirts with their faces plastered on the front, and a list of every restaurant on the back. Each restaurant will have a box that will be checked off once visited.

“We can take a picture at every restaurant with our meals,” Swedelson said. “It’s purposely as ridiculously as possible. The t-shirt has to be on, intention has to be there. We have to be there with our food-minds completely activated.” A restaurant only counts as part of the food tour when eaten at while wearing the shirts.

A bit of planning has gone into their culinary mission. “We’ve actually talked about [food poisoning],” Swedelson said. “People are like, ‘What if you get food poisoning?’ That’s a risk we’re willing to take. I think that’s part of it.”

“We’re willing to make that sacrifice,” Molzon added. Way to take one for the team.

The only thing standing in their way is their limited time here at UCSB. Both are seniors waiting to graduate during spring 2016.

Swedelson explained, “At first it seemed easier than we thought. Then we started tallying [the restaurants] up and counting. There’s a lot of restaurants and places that serve food. There’s a time crunch. I think that’s the only real issue. In terms of budgeting, every other meal will be a sandwich or toast at home. Then, we’ll splurge on restaurants.”

As seniors, they’ve witnessed a lot of the changes in the Isla Vista food scene.One restaurant Molzon wished that would come back is I Heart Seoul Food, a Korean barbeque-Mexican food fusion restaurant which closed a few months ago. “I’m disappointed that I Heart Seoul Food left. It’s my homestay,” Molzon said.

For those who wish to follow in their footsteps and embark on their own food mission, Molzon and Swedelson offer some sound advice.

“I think you have to make a commitment,” Molzon said. “Everyone says, ‘I want to eat everywhere in Isla Vista.’ I haven’t heard of anybody that has though.”

“I’m sure someone has done it before, but not with this specific set of restaurants” Swedelson added. “[You] just gotta commit. I would say be fearless. We all hear ‘don’t eat at this restaurant or that restaurant’. Block out the haters — it’s time to eat.”