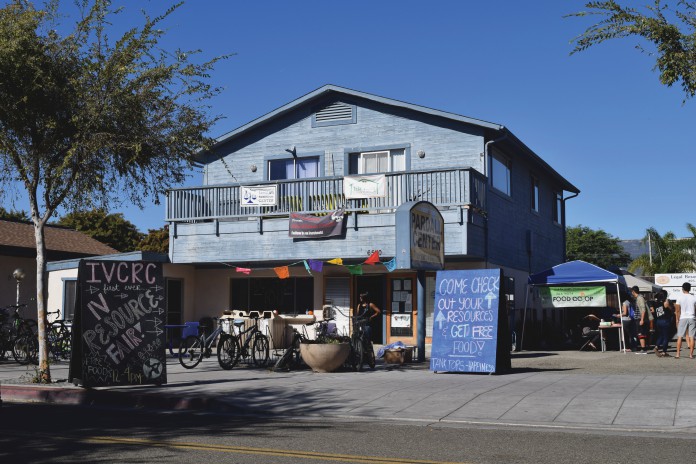 The Isla Vista Community Relations Committee (IVCRC) hosted the first ever IV Resource Fair on Sat., Nov. 7 at the Pardall Center. The fair aimed to provide students and community members with a space to talk about their needs in an ever-changing society.

“The objective of the Resource Fair is to educate and to show people what is available to them,” third year art and sociology double major and IVCRC External Chair Aimee Hanna said. “That’s why we brought the [Associated Students] Food Bank out here. The Food Bank brought food for 200 people today so that we could feed as [many] people as possible with basic fresh veggies [like] carrots, zucchinis [and] potatoes.”

The Food Bank was stationed inside the Pardall Center during the fair, and was giving out fresh produce, seasoning and snacks for those who acquired five stamps from the different organizations located outside in the parking lot. At the end of the day, the stamps were disregarded and you could get as much produce as you wanted due to the amount of leftover food.

“A lot of people don’t really know the resources that they have, or even if they do know they don’t really utilize them, from my perspective,” third year psychology and sociology double major and IVCRC Internal Chair Tai Kang said. “By having all these resources in one place in the public, and [by] really trying to interact with the students and the larger community, we’re really trying to foster and nurture these students.”

One of the issues Kang wants the fair to tackle is the notion that asking for food is something to feel ashamed of.

“It’s perfectly fine to go use these resources — in fact they should be because a lot of it comes out of their student fees,” Kang said. “For example, the Food Bank. A lot of people don’t go to the Food Bank [because] it’s too far or something. But now the Food Bank is in Pardall Center. The destigmatization of the use of food banks and food pantries — people have this negative idea that ‘If I use the food bank … that’ll put [out] this negative image that I’m poor or something.’ It’s a shame [because] everyone pays for it out of their student fees, and there’s no reason why you shouldn’t be able to use it or be afraid to use it.”

Some of the organizations outside of the Pardall Center participating in the fair were the IV Recreation and Parks District Adopt-a-Block Program, Life of the Party and IV Tenants Union.

The Food Co-Op gave out free cookbooks, coupons and chocolate to attendees. They are also working on making their prices more affordable; cheaper than Trader Joe’s, according to Hanna.

An open mic was set up for anyone interested in performing. Several bands and individuals took advantage of the opportunity and provided entertainment for the fair’s crowd and passersby.

“We want to represent the underrepresented,” Hanna said.

Hanna and Kang expressed their gratitude to AS Food Bank Staff Supervisor and Advisor Tuyen Nguyen, calling her their inspiration for this event.