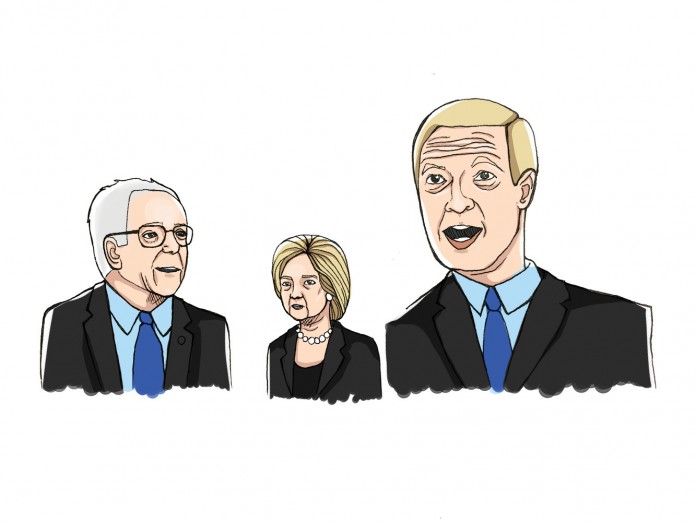 The second Democratic Debate of the 2016 presidential race took place on Sat., Nov. 14 in Des Moines, Iowa. From the outset, it was clearly going to be different from the first, since only three candidates are left: former Secretary of State Hillary Clinton, Vermont Sen. Bernie Sanders and the relatively unknown Maryland Gov. Martin O’Malley.

The first topic of the debate was foreign policy. Of particular note was Sander’s reference to the American tradition of regime change in Latin American countries, something which few other candidates have mentioned regarding the issue. Besides Sanders, there were very few differences between the candidates’ positions, other than some debate as to which degree of involvement the U.S. would have in the impending anti-ISIS conflict.

In answer to the opening question regarding the recent terrorist attack in France, Sanders stuck largely to the usual script by drawing attention to his position on domestic affairs after a quick remark of condolence to the French people and a hostile declaration towards ISIS. Clinton displayed a presidential demeanor with her calm, clear remarks. But it was O’Malley who stole the stage with his exciting “America is the world leader” comments, which the audience found very inspirational.

The second debate was at first a seemingly tame affair. That changed quickly when the words “immigrant-bashing carnival basher” were tossed out by O’Malley, in reference to Republican candidate Donald Trump. That phrase set the tone for the second half of the debate, which was a tensely heated competition between the three candidates to appear as the obvious winner of the night.

O’Malley’s initially hilarious remark was followed up by a weak attack on Clinton’s plan for reform of Wall Street, calling it “weak tea.” Weak insult, Mr. O’Malley. Sander’s quip, “I’m not that much of a socialist as compared to Eisenhower,” referring to former President Dwight D. Eisenhower’s 90 percent tax on the rich, was well-received by the audience.

O’Malley stood out by referring to his experience within the executive branch as governor of Maryland, pointing out his fellow candidates’ relative lack of experience within the executive branch on several occasions. His record as governor of Maryland was outstanding when it came to raising the minimum wage and implementing healthcare reform, something that he seeks to do as president, as do Clinton and Sanders. O’Malley also impressed with his declaration in favor of the U.S. taking in 65,000 Syrian refugees, something no presidential candidate had suggested up until now.

Sanders didn’t stand out quite as much as O’Malley did, but perhaps that is because most are already familiar with his message. Sanders wants to help college students. He wants to ensure that students graduate with no debt and find stable careers after graduation. He wants to help out Americans as a whole by patching up the draining middle class and attacking corporate greed. Sanders’ integrity in refusing to change his positions on the issues is respectable, and it reveals an integrity he might display if he were elected president.

Clinton is currently in the lead for the Democratic nomination, and so one would have expected something a little more than what she gave at the debate, where she didn’t necessarily stand out. However, the composure she displayed when facing difficult questions was respectable, since she was the center of attack from her fellow candidates.

The second Democratic debate turned out to be an inspiring affair that provides a bit more direction to Democrats as how to vote come the primary, and perhaps those who aren’t certain of which party to vote for will be a bit more certain come the general election.