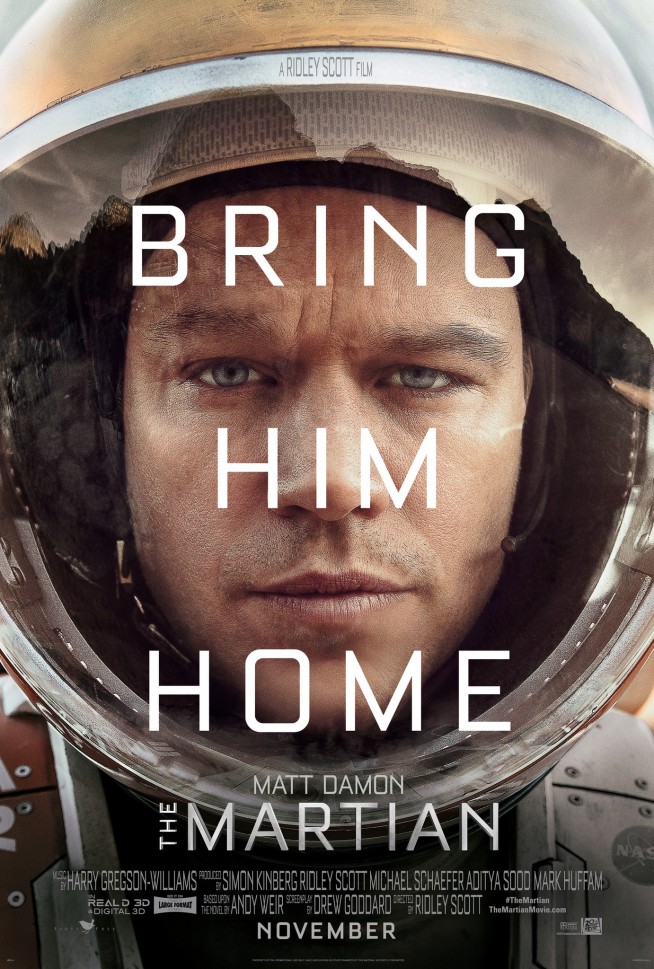 Director Ridley Scott and actor Matt Damon have in the past been some of the most bankable names in Hollywood, but in recent years their relevancy has diminished rapidly. If The Martian is their final shot at resurrecting their careers, they’ve definitely succeeded.

As far as space films go, they all follow a similar plot structure: astronaut stuck in outer space tries to find their way back to their family (Gravity, Moon, Interstellar). In this sense, The Martian is no different. However, the film isn’t as nauseating as Gravity, nor is it as ambitious as Interstellar (the lack of complex science works in this case). It meets somewhere in the middle, between blockbuster and festival favorite.

If anyone ever believed Scott lost his Midas touch, he just proved them wrong. After a series of not-so-good films, Scott returns with a delectably original film that has you on the edge of your seat right until the end. Scott’s directing chops are most evident through his use of contrasting handheld camera close-ups of Damon’s face with panning, long shots of the mars horizon (special shout out to the film’s production designer, Arthur Max).

Unlike his other recent films, The Martian isn’t trying excessively hard to be edgy (ahem, Cameron Diaz fornicating with a car in The Counselor), nor does it struggle to be epic (Exodus, Prometheus). Any other director could have destroyed this film by using an abundance of subtext, forcing the audience to dig through in some effort to appear profound (I’m looking at you, Mr. Nolan). The simplicity of the film is its strongest asset.

The protagonist of the film is Mark Watney: super botanist and Scott’s futuristic, sci-fi Robinson Crusoe played by Matt Damon (AKA Jason Bourne, AKA that other guy in Ocean’s Eleven, AKA Ben Affleck’s friend). Unlike Sandra Bullock’s whiny, stranded astronaut character in Gravity, Watney is cool, calm, and far more likeable.

While he remains composed in most scenes, he is given some opportunities to display his range, and takes full advantage of them. There is a particularly compelling scene in which he requests NASA to inform his parents, in case of his death, that he died for a worthy cause. It’s the only glimpse of his life on earth that the audience is given, and we begin to question whether he truly means this, or if he’s just trying to convince himself; it’s possibly Damon’s best scene in his entire career. Damon gives a nuanced performance throughout the film and proves to the world that he is a seasoned professional.

The rest of the supporting cast consists of über cool, impeccably dressed, straight out of Tumblr ultra-hipster NASA scientists, who are not given enough space (pun intended) for any character development. The casting team even managed a coup by hiring some hipster favorites like Kate Mara, Sean Bean, and everyone’s favorite hipster rapper, Donald Glover.

The highlights of the supporting cast are Chiwetel Ejiofor as the sensitive engineer and Jeff Daniels as the incredibly irritating head of NASA. The tension between the two creates an electric chemistry and some great scenes. If Glover delivered his dialogues any faster, it could be mistaken for one of his ingenious Childish Gambino rap flows. Jessica Chastain’s portrayal as the team leader is unquestionably sincere (especially during the film’s climax), as are the rest of her crewmates.

This sincerity is felt in every second of this film. The film is refreshingly honest. It doesn’t attempt to dwell on the psyche of the isolated man, nor does it focus on his atonements as he nears his possible end. It avoids the pseudointellectual territory of its predecessors Interstellar and Gravity while still managing to be compelling and genuine. If you’re looking to see the next 2001: Space Odyssey, this is probably not your forte, but if you’re a fan of quality cinema and can be entertained without the metaphysical mumbo-jumbo, then this film comes highly recommended. And all of that Oscar talk you heard? Completely justified.