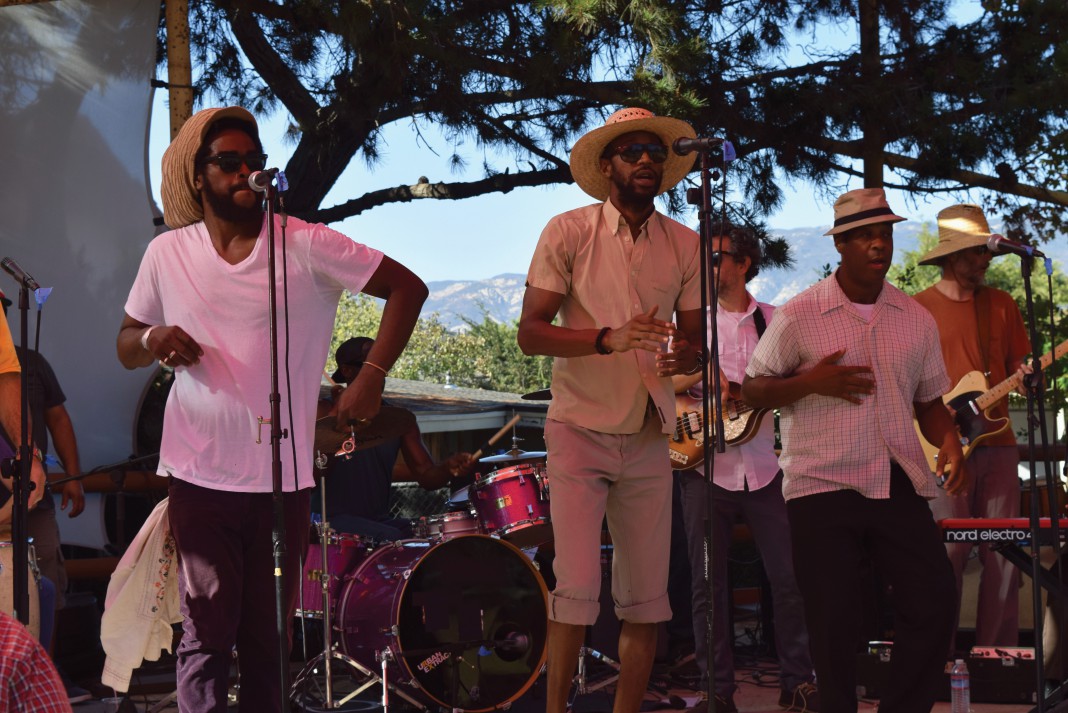 In its second consecutive year, KCSB-FM’s “Hello World!” concert brought the peaceful sounds of the Caribbean Sea to Isla Vista’s Anisq’Oyo’ Park on the sunny afternoon of Saturday, Oct. 10. The lineup consisted of local roots reggae outfit Cornerstone, Los Angeles reggae-soul band Lions, and last, but certainly not least, producer and dub reggae legend Scientist. The musicians conjured good vibes while the crowd indulged in peaceful lethargy and socializing when they weren’t dancing near the front of the stage, embodying the calming, un-inhibiting freedom of reggae music.

KCSB-FM’s “Hello World!” annual concert series began last year, in partnership with the University of California, Santa Barbara MultiCultural Center. The show serves as an alternate to AS Program Board’s annual Welcome Back Concert, and features artists from different regions of the globe. This year, music from the Caribbean was explored. According to KCSB Development Coordinator Ted Coe, “[KCSB and AS Program Board] both had an interest in bringing positive cultural outlets to Isla Vista, especially after the various incidents of 2014, and it really felt like there was a need for art, music, and inclusivity.” The first incarnation of “Hello World!” explored different forms of Latin American music, featuring soul band Chicano Batman, afrobeat orchestra mexico68, and Kraftwerk-inspired ruidosón group Los Macuanos.

The show kicked off with a set from Cornerstone, a Santa Barbara-based band that plays regularly at various spots around the city and local area, performing with artists including Burning Spear, Gergory Isaacs, Don Carlos and Toots and the Maytals. The group’s horn-driven take on roots reggae and energetic stage presence, including a few offstage forays into the crowd by their lead singer Fredo, successfully warmed up the crowd, administering the afternoon’s first dose of cheery island vibes.

The stage setup itself was an interesting structure unlike anything I’ve seen in Anisq’Oyo’ Park before. The music was performed in the historic amphitheater, but performers were shielded from the sun by a large red canopy, held up by lengthy bamboo support beams. The resulting structure was both practical and aesthetically pleasing.

The next group to take the stage was the Lions, a band out of Los Angeles published by the influential Stones Throw Records, whose past and present lineups have included the likes of J Dilla, Aloe Blacc, and Madlib. The Lions’s sound is a mixture of different forms of Jamaican music, old and new, and draws heavily on classic American soul. The set was punctuated by the occasional ferocious, delay-soaked lion’s roar from lead singer Alex Désert, in homage to their name.

In between sets, KCSB DJs would take the helm at a set of turntables next to the stage, spinning their favorite reggae records while the musicians sound-checked and set up equipment. One of the mainstays at the turntables was Sam Goff, KCSB’s external music director, who described Hello World!’s lineup as “pretty diverse.”

“We’re reaching out to the wider Santa Barbara community with Cornerstone, a local reggae group, and then we have [the] Lions, who are really innovative and groundbreaking in what they’re doing,” Goff said. “Then we have Scientist, who’s one of the masters of dub, like one of the greatest of all time, so [this year] is really, really cool.”

Around 5 o’clock, Scientist himself took the stage, and I use that phrase lightly. For the duration of the set, Scientist opted to play his music in the sound booth behind the crowd, where he was completely visible but not instantly recognizable. Scientist has always been an artist who doesn’t need to be seen to be heard, as he has been a vital influence on many prominent musical genres whose fans usually know nothing about him.

“[Scientist] is a huge pioneer in the dub remixing phenomenon, sound system culture, of Jamaica,” Goff said. “Even the origins of a lot of electronic music and hip-hop can be traced back to Kingston, Jamaica.”

From behind the scenes, Scientist shared his instrumentals with the IV community while various singers performed onstage and fans bobbed their heads, danced and sometimes cartwheeled to the beat.

Another unique feature of this year’s Hello World! concert was a community art wall, where anyone and everyone was invited to draw on two wooden boards, adorned with the alien spaceship design on the show’s posters. By the end of the show, both boards were completely changed. In one, the planet Earth had become a random patchwork of chaotic, disordered textures, while the other resembled a comparatively ordered psychedelic alien joyride on a sunlit day. Sunshine and peace, cacophony and chaos, existing side-by-side and accessible to all, much like reggae music itself.