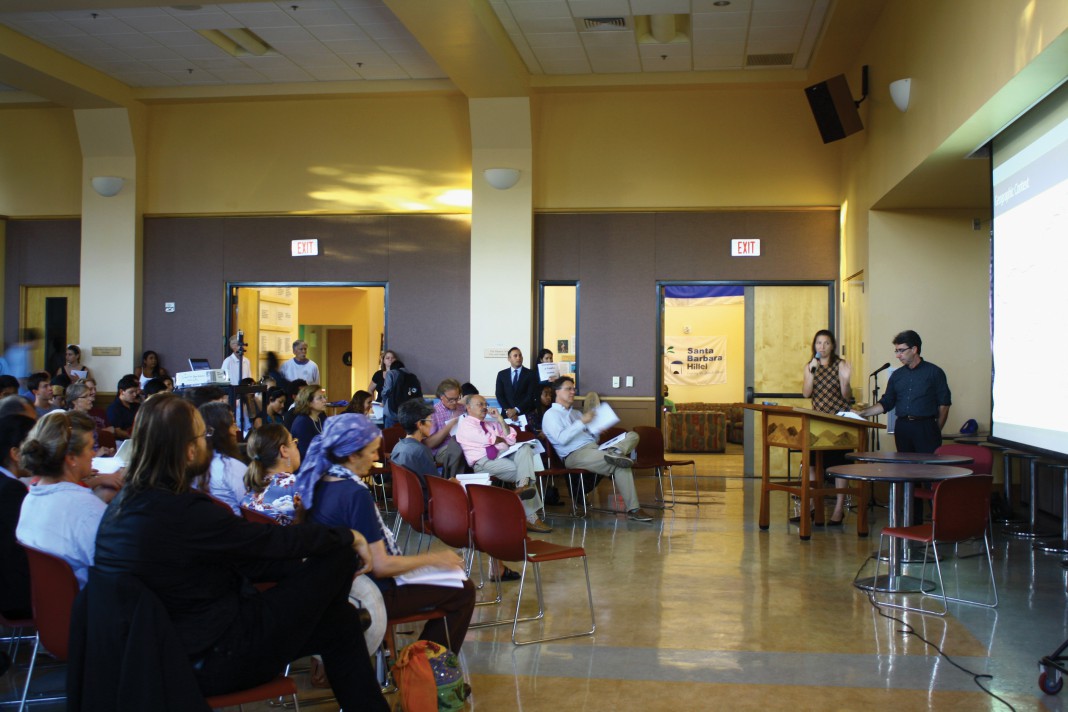 The consulting firm Economics & Planning Systems, Inc. (EPS), in collaboration with Berkson Associates, presented their financial feasibility study that analyzed the possibilities of establishing some form of governance in Isla Vista on Oct. 7 at the Santa Barbara Hillel.

The nonprofit organization Fund for Santa Barbara acted as the fiscal sponsor for the study, which was funded by a total of eight organizations and two individuals. The Associated Students of the University of California, Santa Barbara were included in the count, contributing $10,000 to the study.

The study outlined the revenue and costs that would be associated with four different forms of self-governance: a Community Services District (CSD), a full-fledged city, a Municipal Advisory Council (MAC) and an Area Planning Commision (APC).

The presentation grouped the MAC and APC, since these are the less-costly forms of self-governance they analyzed. A MAC would require a minimum of $3,000 to pay for part-time staff, while the ACP’s cost would be largely covered by the county.

A MAC would consist of a group of elected or appointed officials that would advise the county on topics related to IV, while an APC would take over the current County Planning Commission’s functions and focus on local matters, according to EPS Executive Vice President Rebecca Benassini. Both entities would be formed by the County Board of Supervisors.

However, most eyes and ears were focused on the study’s findings related to a CSD. Earlier that day, Gov. Brown signed Assembly Bill 3, hinting at the growing possibility of a formation of this type of governance.

The study concluded that, should a CSD be formed, its main source of revenue would come from a voter-approved User Utility Tax (UUT) on services such as garbage, electricity, water and natural gas. The tax would range from five to eight percent and raise $320,000 to $512,000 annually after exempting low-income families and UCSB owned property. UCSB’s pledged $200,000 would be an addition to the UTT.

In terms of expense, CSD administrative expenditures would amount to $257,000, which includes the costs of one full-time general manager, one part-time assistant and equipment for their duties. The remaining revenue would be used for services like public safety, building code enforcement, public works, tenant services and community development, according to the study.

The term public safety services refers to a force that would administer tickets for parking infractions.

“This would be similar to the CSOs that are on campus,” Benassini said. “They would be non-uniformed…providing a presence in the area, and giving out tickets which would generate some revenue.”

Benassini mentioned that the hope would be for the group to cover up to 25 percent of their expenses in tickets.

In total, public services like these provided by the CSD would cost $406,000, in addition to the aforementioned $257,000 in administrative costs.

If IV took the cityhood route, costs would skyrocket when compared to the other governance options.

“We’ve estimated the cost to be in the range of $8.5 to a little over $9 million annually,” Berkson Associates Principal Robert Berkson said. “That’s both to provide the services that are currently provided by the county at the municipal level and also to add on the administrative and management structure as well.”

The cost would be too high for conventional taxes to cover, according to Berkson.
“Revenues are not sufficient to cover the expenses [of a city],” he said. “[There’s] a shortfall of a little over $3 million.”

A UUT and a special tax of $350 to $370 per bedroom would be required to make up for the needed money if a city were to be formed.

A CSD would cause no change to the aforementioned service providers. A city would stop receiving the services from the CSAs and take over the county’s municipal services. Comparatively, a MAC would make recommendations, but the services would be largely unaffected and it could take over the funds in CSA 31, which provides an annual $90,000 in revenue to take care of streetlights. And while the APC would have no change in service providers, it would form a local Planning Commision, replacing the county’s.

“I was…really excited to see the room get full, but I was a little disappointed to not see again the presence of families — Latino families in particular,” third-year history of public policy major and External Vice President for Local Affairs Paola Dela Cruz said. “There’s always an absence of them, and that again reminds me of the need there is to continue strengthening the relationships that we have with them.”