Home Features Exclusive Do What You Love: Why Isla Vista Skaters are Stoked About Movement... 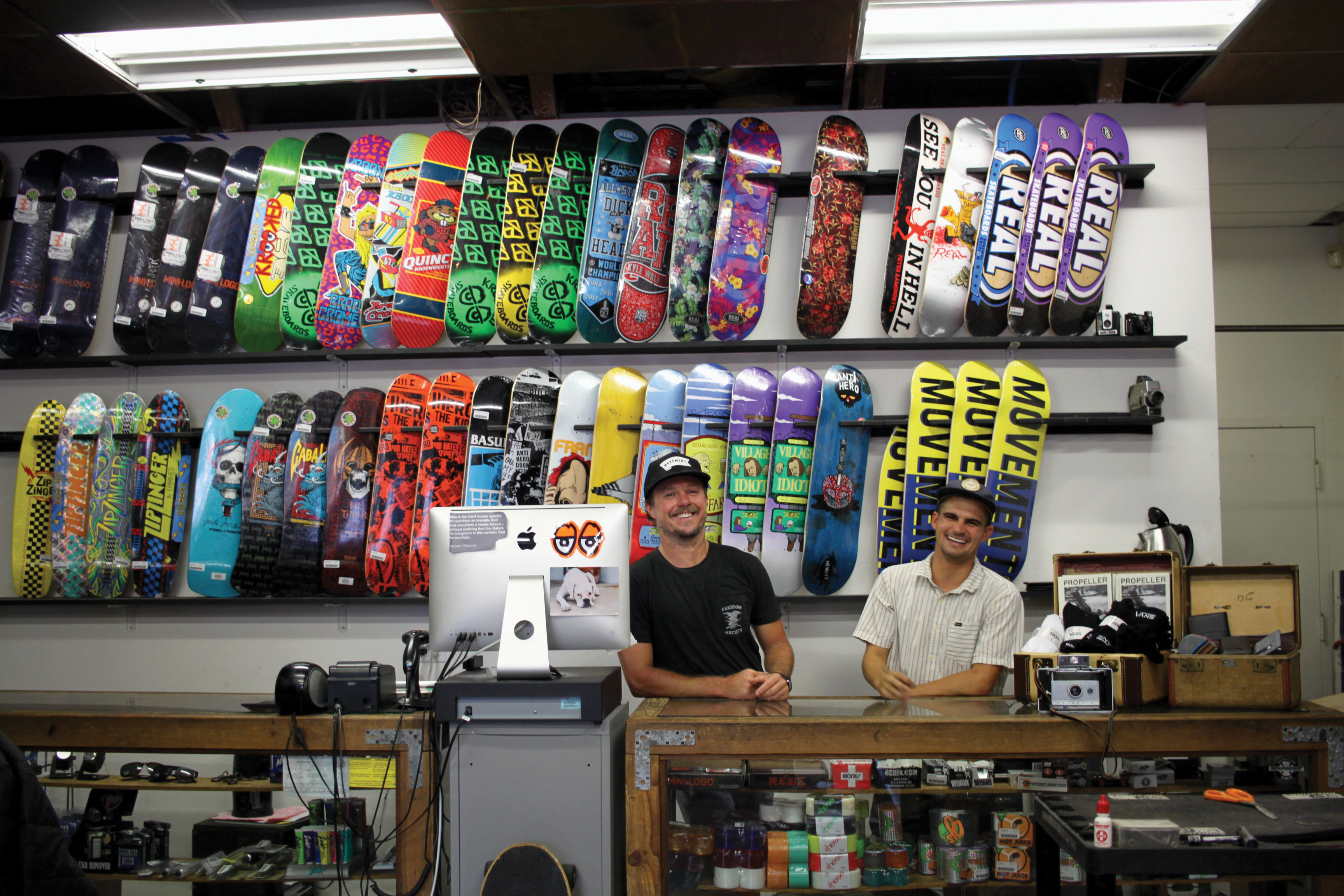 Isla Vista is home to a variety of small businesses that often go unappreciated. Not unappreciated in that they don’t receive customers — rather, most people don’t know the full story behind those who run the place, or the hard work that goes on behind the scenes. Such is the case with Movement Boardshop.

Movement Boardshop owner Todd Griffiths grew up in Huntington Beach, where he began to skate and eventually surf. After graduating from San Diego State University, he became a sales representative for the skating and surf industry. He held this occupation for 12 years before he tired of it, and decided he wanted to do something that was more meaningful to him.

When Griffiths opened up Movement Boardshop with Ben Mahn back in 2011, it was because there was demand for it in IV. IV Surf had recently gone out of business where Chase Bank now stands, and there was no other board shop in IV, only a plethora of bike shops. Movement’s first home was above Silvergreens, but shortly moved over next to Hana Kitchen, where it has now been for the past three years. Ben moved on to other lines of work, but Todd remained.

Board shops have historically been a mecca for skaters and surfers. It is a place where one feels welcome and at home. In fact, as I was speaking with Griffiths, I couldn’t help but notice how much I felt as though I was in a living room rather than a shop. He sat across from me on the couch next to his dog, Luna, and I sat on a bench made out of used board decks. While we spoke, customers would walk in and he would greet them and ask if they needed or were looking for anything specific. Some would see this as a standard business move, but Griffiths explained to me that for him, it was more about creating a community: many of his customers are regulars who keep coming back.

While Griffiths might be the owner of Movement, he is also the full-time employee of the shop. If you ever go there, he will be there, and his lovely dog Luna will probably be there too, lying down on the couch or sunbathing outside. He thinks that part of the current appeal of the shop is the fact that he’s always there. People love seeing a familiar place, and Movement offers just that; something that you won’t get anywhere else.

Movement sells just about anything that a larger retail store would sell. There, you can purchase clothing or complete boards, as well as any small parts that your skateboard or longboard might require. What makes Movement unique, however, is that you can find products there that you won’t find anywhere else, as it sells up-and-coming brands from the local community.

I asked Griffiths why he decided to call the shop Movement, and he explained to me that whenever you are on a skateboard or surfboard, you’re always moving. That’s what makes those activities fun and exciting. Todd himself is the embodiment of the name of his shop. Whenever he’s not there, he can be found shredding at the skatepark downtown, surfing, running his dog on the beach, or helping out his girlfriend at her business in downtown Santa Barbara. He is never standing still.

We’re told that if we do what we love, we will never have to work a single day in our lives. Yet this becomes increasingly challenging to accomplish, and many seem to prefer comfort. Todd explained how hard it was to keep the shop running, but he also reflected how he “never [dreads] coming to work”.

When asked how long he plans on running the shop, Griffiths responded that it isn’t a concern and he just “hopes the community [continues to] want to support it.” He explained that every year is better than the last, but there are no plans for expansion as he enjoys the small skate shop vibe it currently embodies. If anything, he will simply continue to expand what works best for the shop.

Part of what makes Griffiths enjoy his work so much is that he appreciates “[helping] out cool college students.” Every year, graduating seniors come to the shop and don’t know what they are going to do with their lives. Griffiths simply tells them to “be stoked.” They just graduated from a great university, are young and have a whole future ahead of them.

Whether or not you ever plan to shop at Movement, Griffiths will be there. And that, to me, is something to be stoked about.