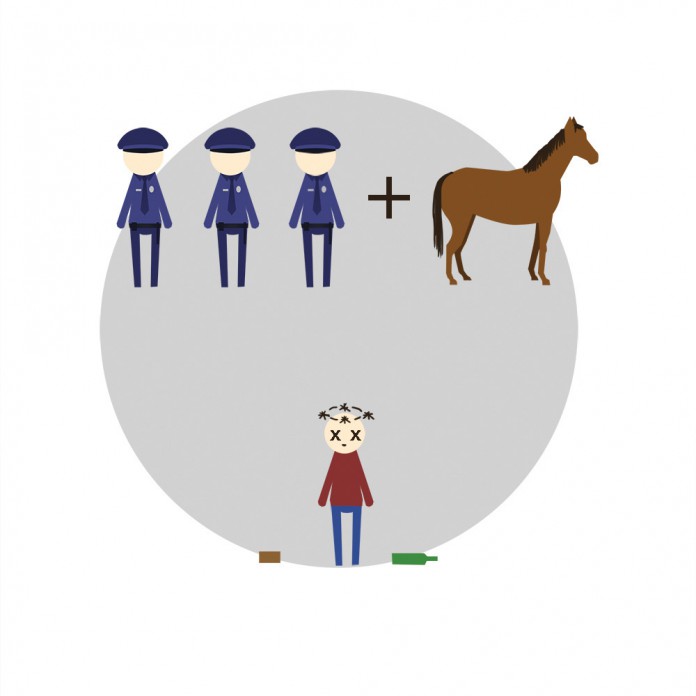 Halloween is fast approaching, and Isla Vista is not your typical trick-or-treating spot, so you’d best get informed or prepare to feel distraught.

Several campus organizations have been putting together alternative events for students and community members in an effort to dissuade mass attendance to the streets of IV.

“There’s a reason why we have a $10 million budget — almost eleven now,” third year history of public policy major and External Vice President for Local Affairs Paola Dela Cruz said. “Students pay money to insure that organizations like the IV Community Relations Committee, my office, Public Safety Commission, Take Back the Night…and all these other organizations within Associated Students are using money during events like Halloween and Deltopia to ensure the safety of the students.”

Examples of these alternative events include movie nights, an IV scavenger hunt organized by the EVPLA office, safe spaces in Pardall Center by Take Back the Night and other activities aimed at providing a safe way to enjoy the holiday.

The scavenger hunt, which started on Mon., Oct. 26, included mason jars scattered around IV with various sorts of prizes ranging from shirts to local business gift cards. The Office of the EVPLA gave out clues on the event’s Facebook page, and participants were encouraged to share when they found the jars.

“[Businesses] have been amazingly receptive,” Dela Cruz said. “It was amazing for me to see how glad and how willing they were to participate.”

The University of California Isla Vista Volunteering Program will be patrolling the streets in an effort to maintain a cordial relationship between students and law enforcement. Created during last year’s Deltopia festivities, UCIV will be distributing water, escorting people and providing other volunteer services.

One of the most anticipated events of the weekend is AS Program Board’s Delirium concert. The two-day concert will feature Fitz and The Tantrums on Fri., Oct. 30 and popular rapper Snoop Dogg on Sat., Oct. 31.

In addition, the IV Foot Patrol (IVFP) and UC Police Department will maintain a strong presence around IV beginning Thursday night. Full deployment will occur on Friday and Saturday. There will be around 100 UCPD officers and 100 Sheriff’s officers patrolling IV this weekend, according to Santa Barbara County Sheriff’s Office Public Information Officer Kelly Hoover.

“This Halloween is similar to others in the past,” Hoover said. “We work closely with UCPD to coordinate more of the Halloween operation.”

The several blockades and checkpoints  in IV will be handled by both the UCPD and Sheriff’s Office. Information on parking restrictions and checkpoint locations can be found online at halloween.as.ucsb.edu. There will also be a medical station provided by the IVFP.

“One of the biggest problems that we see every year is alcohol consumption,” Hoover said. “We [will] have a first aid station, located at the top of the loop. One thing we’re doing differently this year is that the Santa Barbara County Sheriff’s Search and Rescue [branch] will be pairing up with [firefighter] medics to look out for any medical emergencies.”

“On big events like this … we work hand in hand with the sheriff’s department,” UCPD Sergeant Rob Romero said. “Figuring out where we’re going to put personnel, logistics, how we’re going to operate as a team out there in IV.”

Mounted units are also scheduled to make an appearance, and Hoover believes that they are effective when it is necessary to clear a crowd.

“We really love to see the interaction with the students and the animals,” Hoover said. “They just seem to almost calm everyone and provide a level of comfort.”

The Festival Ordinance, which prohibits any music that could attract crowds, will be in effect from 6 PM to 7 AM on Mon., Oct. 26 through Wed., Nov. 4, according to the AS Halloween website.

“It’s been a great fall so far,” Hoover said. “We’ve had a lower number of citations and arrests. The IVFP has been extremely pleased with the cooperation that the deputies are finding out on the streets. Students have been very cooperative and understanding.”

The IV Recreation and Parks District will hold a large-scale cleaning event on Sun., Nov. 1. Since IV is not serviced by any official street cleaner, IVRPD depends on the community to maintain the unincorporated territory in top form.

“It’s a big planned event, and people focus a lot on the law enforcement aspect, but it’s much bigger than just that,” Romero said. “The whole community gets involved to make this a safe event and we’ve been doing this for decades. Last year was a success [because of] more than just the rain, there were also the students making an effort not to invite their friends and going to the other events that were happening on campus.”

Another sentiment Hoover emphasized was that of the “Keep it safe. Keep it local” movement.

“We’re hoping that over time, there will be a reputation that it’s just truly not worth coming from out of the area to Halloween, even though it used to be a big tradition,” she said. “There’s no parking, there’s no music and there’s a mentality that students can’t afford or don’t want to take the risk anymore of inviting people to their home that they don’t know…We’ve seen over the years, it just doesn’t pay to take the risk of having someone you don’t know in your home.”