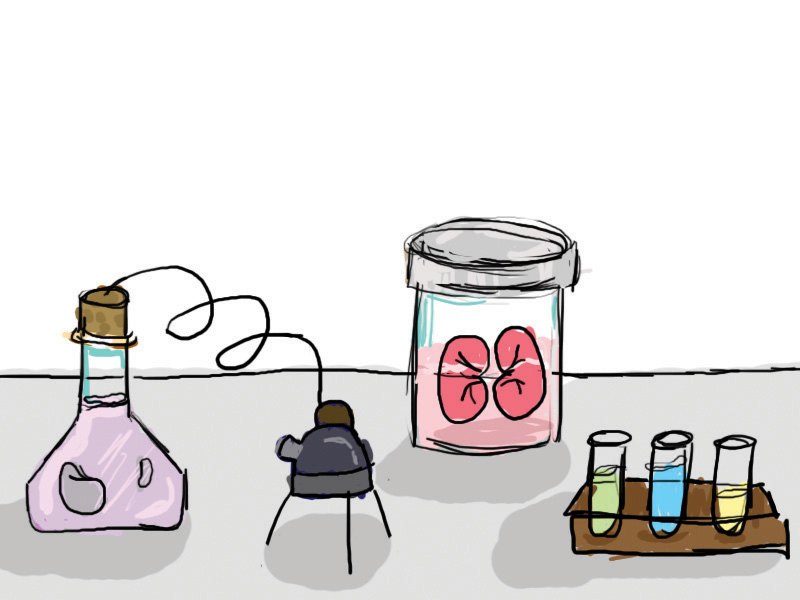 Researchers in Japan have successfully grown a functioning kidney using stem cells. Although the research has only been conducted on animals, this breakthrough can pave the way for human use.

Stems cells are a recent discovery, and have opened the door to many new projects in the medical field. Stem cells are unique because they have the potential to become any other cell found in the body. Growing organs from these cells are one of many different uses for the cells.

Previous attempts at growing kidneys have failed in the past because there was no way for the urine to flow out of the kidney. The kidney would retain the liquid and expand like a balloon, resulting in a condition called hydronephrosis, which occurs when urine is blocked from leaving the kidney and accumulates.

Dr. Takashi Yokoo, and his team of researchers from Jikei University School of Medicine, addressed this problem by creating a new system to make a compatible and functioning kidney. Using stem cells, they added a drainage tube to the kidney to allow the urine to flow out, and a bladder to store the urine.

This technique is called the Stepwise Peristaltic Ureter system, or SWPU. According to a report published by the researchers, the SWPU system was specifically created with two goals in mind: the “construction of a urine excretion pathway and continued growth of the newly generated kidney.”

So far, the SWPU has proven to be successful. To test out the system, the researchers attached the artificial kidney and bladder to the existing bladder of rats. After eight weeks, the kidneys were still functioning and none of the rats experienced hydronephrosis.

After seeing positive results, researchers then experimented on pigs, who have almost an identical excretory system to humans.

There is still a lot of progress to be made before the kidneys can be used in humans. Researchers must continue to study the human excretory system to make adjustments fit for humans.

Now that the researchers have found a successful technique, the SWPU system, they must study long term effects of the stem-cell-grown kidneys. If successful, the stem-cell-generated kidneys can have a big, positive impact in medicine. The researchers are aware of the significance of the project and note, ”worldwide, the number of patients with end-stage renal disease requiring renal replacement therapy is increasing because of the shortage of donor organs.”

According to the National Kidney Foundation, “over 3,000 new patients are added to the kidney waiting list each month,” with over 100,000 people in the United States in need of a kidney transplant. Functioning stem-cell-grown kidneys will allow for more people to receive the kidney transplants they need, while hopefully shortening the average 3.5 year waiting time between registering for a transplant and receiving one. Researchers and scientists hope to begin lab-grown kidney transplants in the next decade.

In addition to kidneys, other researchers and scientists have been working with stem cells to grow livers and different regions of the brain.