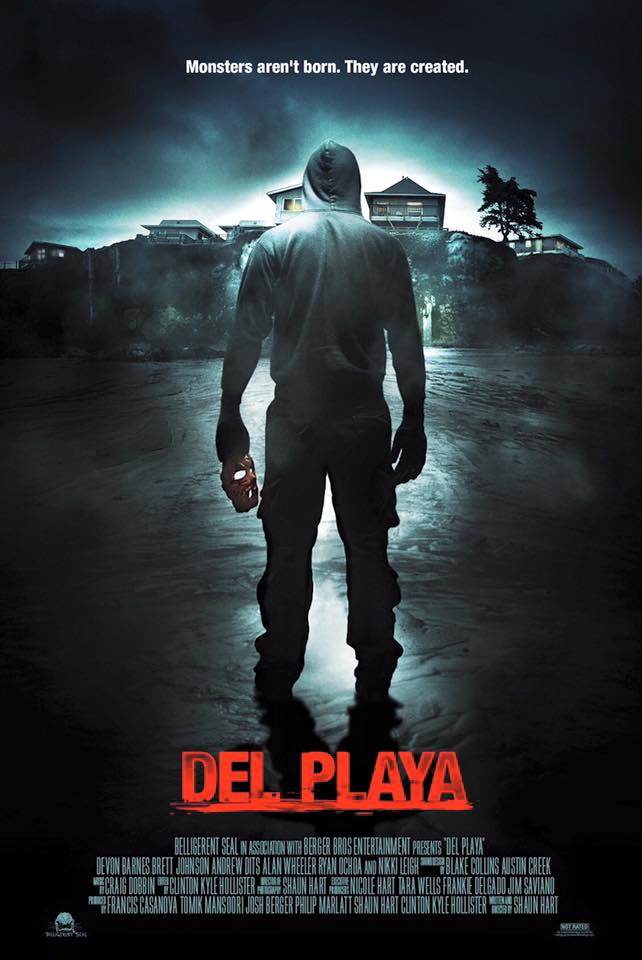 Shaun Hart: Your movie Del Playa, inspired by the 2014 Isla Vista tragedy, is pending release in the upcoming weeks—a little over a year after six Gauchos were killed, and several others injured. You claim this is a “very stylized” horror and satire film aimed at exposing mental health and gun culture present in America, and that you want to make sure we never forget or forgive.

It seems to me you are describing quite a different movie from what I saw in the recently released trailer. All I witnessed was a slasher film void of vision, a B-movie with no worthwhile message.

I thought I had seen it all with the disgusting flash game about the massacre and the ridiculous YouTube videos claiming that the whole shooting was a hoax organized by the government. But it looks like the firestorm just keeps spreading.

I saw the movie’s trailer, and I think I’m missing something. I saw no guns. I saw no satire or humor. I saw nothing of what you claim this movie is about. All I saw was the glorification of a killer. The movie trailer shows how a boy is rejected by a pretty girl, attacked by her cocky boyfriend and his cronies and suffers from domestic abuse. The scene from the trailer in which he crashes through a glass window in slow-motion to grab his victim portrays heroism and bravery. You want us to sympathize with him and champion him as an underdog who is gaining retribution.

Additionally, the women in the trailer are depicted as drunk, party-crazy individuals—the common stereotype of girls who are cruel to the unpopular kids and only go for the mean-spirited jocks. You’re turning the killer into a protagonist, giving him a pedestal. You say you were “rocked” by the event last year, but if that were true, you would not be making this sorry excuse of a film. It is textbook anti-feminist, a resoundingly misogynistic take on the matter.

Your movie is a cut-and-dried example of the exploitation of tragedy. Stop lying to yourself by calling this thing a beneficial piece of art. You are no artist. Art is meant to evoke a feeling of awe; it makes us want to share it with our friends and family members, eager to discuss and hear their opinions. Your movie will not elicit that sentiment. Instead, it will bring up memories of pain and suffering, without the benefit of reflection.

Even though your producers claim there is no connection between the film and actual events, we all know where the plot comes from. Your movie’s killer is based on the real life version that caused the tragedy of May 2014. You are dealing with university students, not a handful of thoughtless consumers.

If you would have made a well-researched, thought-provoking documentary, you probably would not be facing this outrage. Look at the documentary Bowling for Columbine. It depicted the Columbine High School massacre accurately and asked bigger questions about gun laws and mental health issues, things you claim you are trying to satirize with your film. The difference is that you display a blatant disregard for those affected by the IV shooting.

Do you actually believe that your movie is going to change things? Do you think people will watch your movie and say, “Well, things have to change. This film has opened my eyes.” That thought is asinine. This film’s main objective is entertainment. Your film revolves around the execution of murders, not on the larger issues you want to address. Again, I saw no guns in the trailer, and mental health issues seem to be subdued by attributing the killer’s actions to bullying and domestic abuse. You seem set on excusing the killer’s behaviour rather than honoring the victims.

Did you not think about the students that lost friends, or about the injured that will be haunted by the incident for the rest of their lives? In case you are not aware, your movie has the potential to inflict trauma upon the UCSB and IV community, as well as all others who have continued to be affected by this tragedy.

I previously wrote about the one-year anniversary candlelight vigil—an event you disdainfully alluded to when you said, “People are quick to hold vigils and cry outrage and yet nothing substantial has been done to tangibly eradicate the root of the problem.” I saw a community still reeling, one that suffered from the mere recollection of lost friends. These events you call “nothing substantial” are used for healing and for honoring the victims. Your self-proclaimed satire is nothing more than a capitalization on tragedy.

I do not know why you would ever think that we could forget. You were a Gaucho once, but the development of this film and its release indicate a deep, insensitive lack of respect for your former community. Stop using your status as a UCSB alumnus to justify your actions. If you were truly a Gaucho, this film would not see a release.

There is a petition asking for the immediate halt of this film: https://www.change.org/p/berger-bros-entertainment-shaun-hart-josh-berger-halt-release-of-del-playa-movie?recruiter=269301756&utm_source=share_petition&utm_medium=copylink

Listen to the people, Shaun, and do right by your alma mater.